Crisis of the Two Constitutions & the Failure of Conservatism 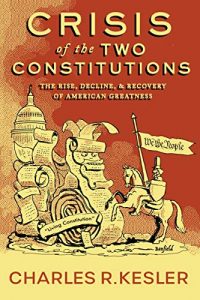 Charles R. Kesler is a professor of Government at Claremont McKenna College, editor of the Claremont Review of Books, and a member of President Trump’s 1776 Commission. The 1776 Commission, made defunct by an executive order from Senile Joe, was an example of Plato’s Noble Lie, where the elders of society create a myth that makes the people feel good about their polity.

Recently, Kesler has come out with his take on the polarization of American political culture and what to do about it. Kesler points out the dubiousness of the hopeful theory that America would politically unite in the face of a crisis. The disagreements over what to do about the ongoing COVID-19 pandemic roughly match the political divide.

Like Christopher Caldwell, Kesler partially blames this polarization on the United States’ two effective constitutions. But unlike Caldwell, Kesler doesn’t blame the 1964 Civil Rights Act. Instead, Kesler’s second constitution are three waves of liberal interpretation of the actual Constitution: “[T]he liberal storm was already gathering in the 1880s and broke upon that land in the new century’s second decade” (p. 143).

The three waves are:

According to Kesler, the key difference between the progressivism of the past and the three waves of liberalism are that

Previous reform movements in America aimed at ameliorating specific evils, like slavery, intemperance, or a prolonged agricultural depression, through specific measures, like abolition, Prohibition, or “free silver.” Broader and deeper waves of political discontent tended to assume an overtly constitutional shape — like the Philadelphia Constitution itself, or the Bill of Rights, or the post-Civil War amendments. Modern liberalism is something else again. Over the twentieth century liberalism declared in favor of many specific reforms, some of them very sensible, but it was never defined by any of them. Its goal was reform without end: a continual, guided progress into a better future” (p. 144).

In Part Three of his book, Kesler critiques conservatism; roughly the “conservatism” of William F. Buckley, libertarians, and social conservatives that were evangelical Protestants or ethnic Catholics. One problem is that these groups actually have considerable differences. When the Cold War ended, they didn’t create a new ethos going forward. The Contract with America was not a clear moral call for action.

Kesler is critical of the George W. Bush doctrine, where “compassionate conservatism” compassionately led to endless wars in the Middle East. The Great Recession was the result of Bush “compassionately” encouraging feckless borrowers to get mortgages they couldn’t possibly manage.

Another flaw with conservatism was its failure to recognize that should its ideas lose favor with the (silent) majority, then these ideas will cease being law rather quickly. The failure of conservatism to stop the advance of the homosexual movement is a big example of this problem. Eventually, the final remnants of those fighting for traditional marriage could only fight from the last shell-blasted trench of a few Bible verses. Their pro-gay rivals could correctly argue that the American government doesn’t constitutionally base its social policies on religion.

Kesler highlights the Trump administration’s accomplishments, and shows how his rivals failed to understand why he gained so much support.

Unfortunately, this book still supports the fundamental flaws of mainstream conservative thought. The first flaw is a belief that the US Constitution as intended by the Framers is the pinnacle of American statecraft. Aside from the Federalist Papers, we don’t really know what every Framer thought about every issue. Issues we have now also didn’t exist in the eighteenth century.

Indeed, Woodrow Wilson’s 1885 book Congressional Government: A Study in American Politics has a great many interesting ideas and many have been proven to work. Furthermore, the US Constitution’s various compromises were so politically unwieldy that they led to an appalling Civil War. The US Constitution is certainly better than anything Robespierre and the Committee of Public Safety developed, but we cannot depend on Alexander Hamilton’s writings about “checks and balances.”

The United States has two constitutions is because contains two mutually hostile people within a single polity. This was best explained by Wilmot Robertson in his classic The Dispossessed Majority. Essentially, American whites with roots in the original colonies and/or Northern and Western Europe (The Majority) are in a vicious social competition with Jews and a collection of non-whites organized by Jews. Additionally, many of The Majority believe in a religion that worships Africans.

Every social issue comes down to this fact. Political ideology is racial conflict by other means. One is right to point to the 1880s, when “liberalism” that underpinned the philosophy of the New Left of the 1960s developed, but this was because a great many ethnonationalist Jews began to move into positions of importance by the 1880s. Wilson’s important Jewish allies Henry Morgenthau Sr. started his career in the early 1880s and Louis Brandeis passed the bar in 1878. These Jews may have been personally loyal to Wilson, but they were Jews first. Brandeis worked for Zionism when he was on the Supreme Court.

Ethnonationalist Jews have a deep hostility towards American whites and they are deeply ensconced in the American Left and the Democratic Party. It is their financial support, media control, and political and legal acumen that organizes Africans, sexual deviants, and spiteful mutants who damage American society while hiding behind “the second constitution.”

Until that fact is addressed by the conservative movement, conservatives will continue to lose every time they fight.