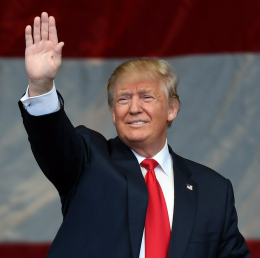 Donald Trump departed the White House in the worst state imaginable. He was impeached a second time and a conviction could open the way to possible jail time. He’s banned or suspended from nearly every tech platform, leaving him unable to directly communicate with his followers. His bank purged his accounts, he lost numerous business connections, and he faces a tsunami of litigation.

One may conclude that The Donald is finally finished. He’s irrelevant and we must move on.

Many on our side want to ditch Trump as quickly as they can. Some even argue that Trump is the bane of our existence and we must be as fervently anti-Trump as MSNBC — but from the Right! It’s not clear why we should do this. The 75 million Americans who voted for Trump aren’t primed to hate their champion. There aren’t millions of people who loved Trump’s nationalist rhetoric but hated the man — those imaginary people voted for Trump. There isn’t an alternative figure or leader to rally around. The closest we have is Tucker Carlson, who is a television host, not a politician. He certainly has his utility, but he can’t necessarily replace Trump.

It makes far more sense to appeal to the Trump mythos than to shake our fist at it. The media’s image of Trump is permanently etched. He represents nationalism and the historic American people, regardless of whether he did a good job in office.

People greatly underestimate Trump’s enduring appeal. Eighty-seven percent of Republicans still approve of his job as president. Republican senators report their phones are ringing off the hook with Trump supporters telling them to kill impeachment. Many of these senators fear Trump-backed primary challengers. The Capitol protests are the source of Trump’s downfall, but the majority of Republicans weren’t bothered by the alleged “insurrection.” Many of the Republicans who were prepared to dump Trump after January 6 are now backing away from their betrayal. They know the party’s base loves Trump and will punish those who stab him while he’s down.

So where does that leave us? Is it possible to build a Trumpism without Trump?

In the near-term, probably not. Not within the Republican party, at least.

As said before, there is no figure with anywhere near Trump’s stature to fill his shoes. There were many who were eager to lead the party after Trump departed office, but the events of January 6 dashed their hopes. Josh Hawley hoped to make Trumpism respectable and shorn of its rough (i.e. “racist”) edges. Instead, his challenge to the election lumped him in with the disreputable elements of Trumpism. He can’t even host fundraisers in hotels anymore after the “insurrection.” Of course, a true national populist leader would roll with it and take it as a badge of honor that the system sees him as a dangerous enemy. He would proudly take the hits for his people and declare this is an attack on all of Middle America. The Yale-educated Hawley is not that man. He’s too stilted and contrived to fill Trump’s shoes.

Ted Cruz and a few other Republicans also sought the same thing as Hawley, but they also can’t succeed. There simply is no politician like Trump. His populist bluster and celebrity charisma can’t be easily replicated.

Republican leaders are doing their best to appease Trump. House Minority Leader Kevin McCarthy flew down to Florida to emphasize his support for the former president and his agenda. Other skittish establishment Republicans are publicly announcing their admiration for the departed leader. This change prompted the Washington Times to declare that Trump is “still a titan” within the party. “I want to make sure that the Republican Party can grow and come back, and we’re going to need Trump and Trump needs us,” Sen. Lindsey Graham, an immigration booster and neocon, told the paper. “I think the best thing for us is to keep the Trump policy movement alive.” Even someone like Graham, who opposes everything Trump initially campaigned on, recognizes that Trumpism is very much alive.

Granted, it could also be a very bad sign that creatures like Graham still cling to Trump. But most of the party aligned against Trump are far worse than the ones who celebrate him. It’s doubtful Trump will back the hideous vestiges of the establishment if he sees them one and the same as Mitch McConnell. McConnell hates Trump and wants him excised from public life. That’s not going to happen, but the animosity between the two will hopefully last. The party needs a clear division between cucks and nationalists. The Trump-McConnell split can facilitate that.

A thing to note is that being anti-Trump and on the Right places you in the same category as McConnell, Cheney, and the Lincoln Project. There are no political figures who are based and anti-Trump. Instead, it’s all neocons and, in the case of the Lincoln Project, groomers. It’s not a crowd we should associate with, nor do they want our support.

The movement, for better or for worse, will always be associated with Trump. That doesn’t mean we should support all of his endeavors or even back another presidential run. (He probably won’t run again due to censorship, mounting litigation, and old age.) It’s more that we come to terms with Trump as an idea. He was the first politician in many years to put immigration at the forefront of the public discourse. He was the only Republican to not apologize for violating racial pieties. He resisted the war drive of the American Empire and tried to bring our manufacturing home. And no politician has more deeply angered our corrupt establishment than Trump. These things will matter more in history than the airstrikes on empty Syrian airfields and pardons of black rappers.

Whatever next nationalist force arises in American politics will trace its ancestry to Trump. The former president was not our savior; he was a wrecking ball that opened the way for our movement to grow. We probably won’t directly affect what happens in the GOP civil war but we can still take sides and cheer on the faction that advances nationalism.

Our immediate task is to stay the course and keep steadily spreading our ideas to more and more people. What Trump unleashed back in 2015 isn’t going away. As he said in his departing speeches, this is just the beginning.