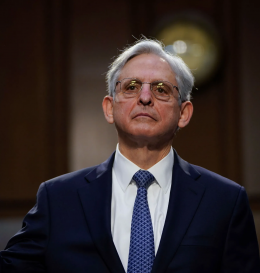 Attorney General-nominee Merrick Garland nearly broke down in tears this week during his Senate confirmation hearing. The cause? The recollection of his immigrant roots.

“I come from a family where my grandparents fled antisemitism and persecution,” Garland emoted [2]. “The country took us in and protected us, and I feel an obligation to the country to pay back — this is the highest, best use of my own set of skills to pay back. I want very much to be the kind of an attorney general that you are saying I could become.”

New Jersey Senator Cory Booker celebrated Garland’s background for giving him the power to confront “hate and discrimination.” Rarely do native Americans (the real ones, not Indians) talk about how their grandparents’ experiences make them good public servants. But if the grandparents or parents happen to be immigrants, it’s a fundamental element for why a figure must be supported.

The constant invocation of immigrant roots browbeats us into accepting that new arrivals define this country. Immigrants are more American than the natives, and we must adore those public officials who can tout some recent migrant in their background. It reinforces our contemporary fetish for immigrants and open borders. America depends on migration — just look at our noble leaders and their humble roots!

Garland was not the only Biden cabinet nominee to bring up his immigrant heritage. Homeland Security Secretary Alejandro Mayorkas said his immigrant background [3] made him understand national security during his Senate confirmation hearing. “The principles of homeland and security have been tremendously important in shaping my life,” he said. “My father and mother brought me to this country to escape communism and to provide me with the security, opportunity, and pride that American citizenship brings to each of us. I was raised to appreciate each day what this country has meant for our family, and the blessing it is to know it as our homeland.”

When he was nominated back in November, he insisted immigration informs his worldview. “When I was very young, the United States provided my family and me a place of refuge. Now, I have been nominated to be the DHS Secretary and oversee the protection of all Americans and those who flee persecution in search of a better life for themselves and their loved ones.”

Born in Cuba to Jewish parents and a mother who escaped the Holocaust, Mayorkas was raised in Southern California, painfully aware of the losses undergirding his family’s American success story. Through his Romanian-born mother, whose relatives were murdered by the Nazis, Mayorkas discovered the horrors that can unfold when refugees cannot flee to safety, friends and former colleagues say. Through his Cuban-born father, he learned someone can love a country and still feel compelled to leave it forever.

The man most responsible for enforcing immigration law favors the refugee over the natives. The white settlers weren’t part of the huddled masses yearning to be free.

Neera Tanden, Biden’s pick to lead the Office of Management and Budget, also highlighted her immigrant background [7] to demonstrate her superiority. “I owe my presence here to their love and support and to the grit and resilience of my mother, an immigrant from India who was left to make it on her own in America with two young children after her divorce from my father,” the Indian progressive said during her Senate testimony.

When Biden announced his nominee for Associate Attorney General, Vanita Gupta, he emphasized [8] that she’s the “proud daughter of immigrants from India.” It was a nice biographical fact to a speech praising Gupta’s fight for “greater equity.”

Secretary of State Tony Blinken promoted his immigrant background with the additional flourish of a Holocaust connection. “Among my parents and grandparents are immigrants, refugees, a Holocaust survivor. For them and many others, America was the last best hope on earth. Their stories inspired me to serve,” he said in a December tweet [9]. “America at its best is why I’m here — that’s what I hope to help restore for future generations.” When first announced as Biden’s nominee, Blinken told the dubious story [10] of his Holocaust-surviving father-in-law being rescued from the Nazis by a black tanker. That was likely a tall tale, but Blinken sees it as the true expression of American identity: a black guy rescuing a Jew from white supremacists.

Vice President Kamala Harris was also the daughter of immigrants — a fact she never fails to mention. Her parents — Indian mother and Jamaican father — met through the civil rights movements [11] and shared its commitment to overthrow the historic American nation. Harris credits her parents’ background for her political outlook. In the opinion of the New York Times [12], immigrant-raised Harris is “the face of America’s demographic shift.”

The entire Biden administration represents that shift. It joins South Asian strivers with the Jewish old guard in the shared devotion to the Statue of Liberty poem. Mass immigration and opposition to the historic American nation define who they are and what they want for this country.

Immigration hagiography is not just for cabinet picks. Nearly all political figures engage in this rhetoric. It even pervaded Donald Trump’s first impeachment hearing [13]. Several witnesses called by the House emphasized their immigrant backgrounds, even though the case had nothing to do with immigration. The British-born National Security Council Advisor Fiona Hill declared immigration is the “essence of America” when she testified. “This is a country of immigrants,” she elaborated. “Everyone immigrated to the United States at some time in their family history. And this is what, for me, really does make America great.”

At least three other Deep State lackeys who testified brought up their immigrant background to score points with the press and lawmakers. It’s unclear how someone’s grandparent immigrating to America clarifies Ukrainian policy, but, unfortunately, we don’t have the tremendous wisdom of foreign policy apparatchiks.

A deep sickness lies within the American public consciousness. Immigrants are seen as inherently virtuous and the epitome of our country. Even many so-called conservatives uphold this belief in the nation of immigrants. Excising it is a necessity. The European settlers made this country, not the Ellis Islander fresh off the boat. The new arrivals only became good Americans when they joined with the native stock. Now the native stock are only good Americans if they assimilate to the newcomers.

We can never win if the majority persists in this stupidity. The people need to recognize that when someone like Merrick Garland says his immigrant grandparents motivate him to serve, it’s not a selfless calling. It confesses his desire to rule on behalf of his own malignant class.