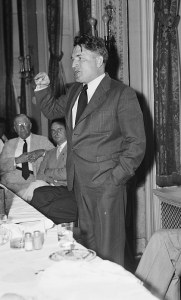 To say that Disciples of Christ minister Gerald L. K. Smith had a controversial career would be an understatement. He was aware of the Jewish Question and published an influential Rightist newsletter called The Flag and the Cross for many years. He was “deplatformed” throughout his life, was met with hostile and jeering crowds, endured several attacks, and gained plenty of intrusive FBI and ADL attention. He had bitter falling outs with former friends and allies. Even George Lincoln Rockwell feuded with him.

Smith was easily one of the greatest public speakers of his day. He had more attentive audiences than hostile ones. H.L. Mencken called him the “greatest orator of them all, not the greatest by an inch or a foot or a yard or a mile, but the greatest by at least two light years. He begins where the next best leaves off. . .” [1] [2]

The late Glean Jeansonne [3] wrote a decent, but mostly hostile, biography of the man. Most of the information in this article comes from this biography, but some of Smith’s writings are also online [4] so I used that information when researching this article. Smith’s papers [5] are stored at the University of Michigan.

Reverend Smith was from rural Wisconsin. His forbearers were Virginians and early pioneers to the Midwest. Many had been preachers. His father was sickly and suffered from dementia his last ten years of life. Due to his father’s illnesses, Smith had to work hard from a young age, but his parents made sure his work didn’t get in the way of his education. They also taught him lessons from the Bible.

Smith married Elna Sorenson in 1922. She supported his efforts throughout their lives together. They adopted a boy — “Gerry” [6] — who went on to become a professional golfer and war hero in the Burma Campaign. Smith’s first preaching job was in Indiana, but Elna contracted tuberculosis, so the family relocated to Louisiana since the climate there was said to help those with the condition. In Louisiana, Smith’s extraordinary career took off.

While preaching in Louisiana, Smith became an important ally of Huey Long, Louisiana’s most powerful and interesting political figure. Long was a Left-wing populist whose Share Our Wealth political platform was very popular. Long was a serious rival to Franklin Roosevelt, but he was killed by an ethnic Jew (baptized Catholic) named Carl Weiss. Smith was with Senator Long during the shooting and gave a funeral oration  [7]for Long [8].

It was during Smith’s time with Senator Long that he became aware of the Jewish Question. Not only was Long’s killer an ethnic Jew, but Long’s most corrupt and disloyal aides were Jews. The most important event was when Smith used his connections to defend some parishioners from a bank foreclosure. The bank was attempting to foreclose on those who had very little left to pay on their mortgage. That bank was headed by a Jew.

Smith lost his preaching job due to his fight with the bank, and since Huey Long was dead, he decided to try his hand in politics and move on to other places. For a short time, he was allied with William Dudley Pelly. [9] He later moved to Detroit, where he became allies with Father Coughlin [10] and other Rightists and anti-Roosevelt people. He ran for the US Senate in Michigan in 1942, but was defeated in the primary. In 1944, Smith organized and led the America First Party, but it didn’t generate many votes.

You can buy It’s Okay to Be White: The Best of Greg Johnson here. [12]

While in Michigan, Smith also had his work translated into Polish. At that time, a Protestant minister’s ideas didn’t take in that mostly Catholic community, though this translation attempt does deserve some further remarks. In the nineteenth century, a preacher like Smith would have been a dedicated anti-Catholic and Poles would have seemed like an alien people to any Anglo-American. But by the 1940s, Poles and other Catholic ethnics were assimilating to the mainstream, and the political Right was recognizing the overlap between Catholicism and Protestantism. Reverend Smith was ahead of the Reagan administration and Pope John Paul II by forty years.

After World War II, Smith started to connect with returning veterans’ groups, such as Protestant War Veterans, headed by Edward J. Smythe, and the Saint Sebastian Brigade. These groups were against an internationalist agenda and were frustrated with the late President Roosevelt’s policies that helped lead to the Soviet’s takeover of Eastern Europe.

After World War II, Smith argued for an America First agenda that included buying Greenland, repatriating blacks to their homeland in Africa, ceasing to subsidize the British Empire, and taking ownership of Pacific islands to wipe out Allied war debts. He was not as hostile to President Truman as he was towards Roosevelt, but he was still very much a fire-and-brimstone outsider.

Although Smith was friends with Henry Ford (to a degree), Jewish pressure groups and mainstream political rivals in Detroit made the local scene hostile to Smith. He couldn’t rent venues, was met with angry crowds, and was generally squeezed out. As a result, he moved his headquarters to Saint Louis [13] in 1947. That Midwestern city was one of the first to suffer from the so-called Great Migration of sub-Saharans to the cities of the North and so it had a considerably red-pilled population that quietly supported Smith’s organization. From Saint Louis, Smith’s newsletter, The Cross and the Flag, would be published until after his death.

Smith didn’t live in Saint Louis, however. He mostly lived in Tulsa and Los Angeles. Smith also changed his organization from an America First orientation to a Christian Nationalist orientation.

His Christian Nationalist [14] principles were:

Smith’s only mistake at this time was not going on television. In the 1950s, he was getting older. He was not as ruggedly handsome as he was while working for Huey Long. He felt that he’d not be a good fit for TV, which was probably his biggest mistake.

Smith’s Christian Nationalism was funded mostly by small donations. His donors were usually from California, and there were also large pockets of donors from Michigan and Illinois. Many donors were also scattered across the South. None came from the Northeast. He pulled in around $150,000 a year and paid himself between $14,000 and $20,000. In the 1960s, his most passionate followers from the 1930s and 40s were dying off. Many left him money in their wills. He invested this money in antiques, art, and a large collection of unique Bibles. He did not pay his staff well at all, and many of his help were women and semi-retired volunteers. They often spent their time managing correspondence and stuffing envelopes. The bulk of his donations were used for shipping and handling, as well as postage. The Cross and The Flag was never a profitable publication.

The gist of Smith’s work consisted of exposing conspiracies that are very well known by now, such as those involving the “Illuminati.” These conspiracies are impossible to prove and hardly matter at all in the real world except that they give focus to white discontent. What he hit upon, more importantly, was that the organized Jewish community was a fifth column that sought to get the United States involved in Middle Eastern wars on behalf of Israel. Furthermore, he argued that Jews in the United States were conspiring to get America hooked on drugs.

Biographer Glean Jeansonne provides a psychobabble-filled analysis of why Gerald L. K. Smith embarked on a counter-Semitic crusade, but since he cites concepts like the “authoritarian personality” that are now known to be hogwash, I won’t repeat these ideas here. Jeansonne falls short in the same way all mainstream historians do when analyzing the ideas of Rightists and white advocates: Jeansonne seems to try very hard to not understand the context in which Smith’s ideas developed.

During Smith’s life, and after the 1964 Civil Rights Act was passed, the United States was beset with a Congoid insurgency that turned every African ghetto in the Northern United States into a post-apocalyptic wasteland. It took a policy of locking up nearly every young, sub-Saharan male to end the problem. Additionally, Jews in the pharmaceutical industry were getting white Americans hooked on drugs. In the 1960s it was Valium [15], and more recently it has been OxyContin [16].

After Smith died, it became clear that the organized Jewish community is a Fifth Column when it comes to foreign policy. Since the end of the Cold War, a parade of ethnic Jews (Paul Wolfowitz, Madeline Albright, Wesley Clark, William Safire, and more) have encouraged American aggression in the Middle East and against Russia. None of these conflicts have benefited America and none have gone well.

One could argue that since the book was published in 1988, nobody could possibly have known about the neoconservatives and the disaster of the Iraq War. But in 1983, hundreds of American Marines were killed in the Beirut bombing while deployed there to protect the interests of Israel. The fact that Jeansonne doesn’t mention that event in the biography is an act of historical malpractice. According to Jeansonne, Smith was just a guy “spewing hate.”

In looking over Smith’s career compared to other Rightist activists, I have come to conclude that Smith didn’t do anything wrong except forgo any possible opportunity to get on television. He had no big financial scandals, no sex scandals, and didn’t recant his beliefs and go to the Southern Poverty Law Center to grovel. He worked hard every day of his life.

Other than his early political activism with Share Our Wealth and America First prior to Pearl Harbor, Reverend Smith was out-of-step with his times. American Protestants in the twentieth century were totally wrapped up in Christian Zionism and the heretical Scofield Bible [17]. All of the men whom he supported for President lost, and after his first Senate run, Smith got fewer and fewer votes. When Gerald L. K. Smith died in 1976, counter-Semitic clergy did preach at his funeral, but no major politician came to see him laid low.

Smith’s career should be seen as that of a prophet. He was ahead of his time, and he was hated by the mainstream for it. In fact, he didn’t attend church for the last two decades of his life due to his political activity. Now America First and immigration control is moving to capture the mainstream of the Republican Party.

On a final note, as mentioned above, Gerald L. K. Smith was a Disciples of Christ minister. That denomination’s main rule is to follow the words of Christ — all other matters can be handled in accordance with the individual’s conscience. There are two famous Disciples of Christ ministers. On the Right was Smith, and on the Left was Jim Jones of the Peoples Temple. Jones was praised to the sky by the media until he led his followers to drink poison in a South American jungle. In his later years, hounded by the media and mainstream, Smith moved to Eureka Springs, Arkansas. There, he had a huge statue of Christ built upon a mountain top. He also founded a museum. Eventually, he built an amphitheater that hosted a Passion Play [18] in the summer. Audiences loved it, although the organized Jewish community blocked efforts to improve the area’s roads to handle the excess traffic. The play continues to this day, and because of Smith, Eureka Springs went from being a poor town in the hills to a prosperous community.

In other words, Leftism leads to disasters when applied in the real world. Rightists produce goodness everywhere they go.