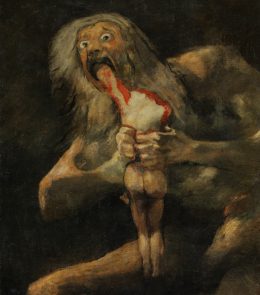 As usual, it starts with an anecdote — a “friend of a friend” kind of story. There was a guy who raised pigs. He wasn’t a professional pig farmer, but he raised some hogs on the side. He lived in a town with a large cakes and sweets company. So, to save on pig feed, he’d purchase the cakes and sweets unfit for human consumption and their byproducts from the factory. That’s what he used to feed the hogs. Then a friend of a friend was invited to the amateur hog farmer’s house for roast hog. Indeed, a whole crew of guys got together, since it’s apparently impossible for the average man to eat a whole hog all by himself. I’m told they killed the pig with an axe and roasted it on a spit over a great big fire. They were probably salivating something fierce as they prepared to devour this delectable meat, but the first bite of pork held a nasty surprise. The pork tasted like cookies. Not faintly. Not a sugary aftertaste. Not a sweetish aroma. The pork was sweet and tasted like literal cookies.

I could not believe my ears. I was incredulous. What universe do we live in when pork can taste like cookies?

I was ready to dismiss this story out of hand until my friend, whose friend had gone to the cookout, set his mug of black ale resolutely on the beer hall table and assured me that he “shits me not.” That settled it. I was a believer in hog cookies.

Now, we can discuss how you are what you eat. This also applies to the animals we eat. You are what your food eats. For example, people who do not eat omnivores cannot consider themselves meat-eaters. Pigs and prawns are the most commonly consumed meat-eaters, and anyone who avoids these delicacies should be considered a vegetarian and treated with the same suspicion and distrust we reserve for these gastronomic deviants. Insofar as we are committed to health, wellness and strength, we should not only mind our diets, but our food’s diet as well. Many other people have harped on about eating grass-fed and free-range meat, rather than meat from factory-farmed animals. Eating free-range animals is also important because their offal contains those vital vitamins we’d otherwise be forced to consume through vegetables (hawk ptooey). Your physical fitness is greatly determined by what you eat, possibly to an even greater degree than your physical activity. It won’t do you much good to exercise like a madman if you consume garbage and gruel to sustain yourself. Part of the reason why the modern world is the way it is is that we are weak and complacent due to our unhealthy diets. As the data guys say, garbage in, garbage out. So, there’s a lesson for you: buy meat from sources where you can be reasonably certain that the animals are properly fed and cared for. It’ll cost more, but that’s the price of being healthy.

While for the time being, I have no plans to eat my neighbor’s ass, the pig story intrigued me. 2020 saw me under lockdown, with no gym to go to for the better part of the year. Demons I long considered buried started rearing their ugly heads. 2020 was the year I was reminded of my ravenous sweet tooth and predilection for fast food binges, fueled by the boredom of nothing to do while everything was locked down. 2020 was the year when I reawakened my old sugar addiction and got fat.

Now, I can walk around and look for excuses. There was the lockdown, so my gym was closed. I’m genetically prone to obesity and I have an addictive personality, both traits running in the family. I also have the age-old problem of washed-up jocks: nothing in the civilian world compares to the number of calories I used to burn when I was doing pro sports. But ultimately, it was me who willingly purchased the hamburgers, potato chips, and genuinely frightening quantities of cheesecake. It was me who shoved them down my gullet, and it was me who did not avail himself of the armbars and jungle gyms around town. Man is subject to circumstance, but also in charge of his own destiny. The tension of these two contradictory statements is where life happens and in the year of our Lord 2020, I made all the wrong choices.

When I heard the pig story, my first thought was about what my flesh would taste like if eaten. The very thought of cookie dough pork made my stomach turn, but what would I taste like, given my nasty diet? For all of Nick’s piss and vinegar, Jeelvysteaks are basically candy. Believe it or not, the thought of my flesh tasting like cookies was the shock I needed to shake me out of my complacency. That was three weeks ago. I’ve removed all carbohydrates from my diet, ceased drinking, and hopefully, I’ll reach my usual levels of fitness too.

Next time you’re tempted to eat junk food or sugars, think of poor Alex Jones stringing you up by a chain, gutting you, skinning you, turning your ass into steaks of magnificent smell and color, and biting into you — only to discover that he’s eating meat which tastes like cookies.