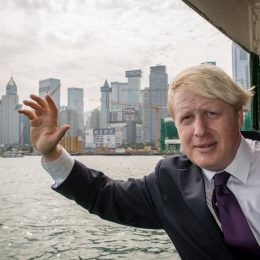 Boris Johnson visits Hong Kong in 2013 while Mayor of London

Boris Johnson led his country into separating from Europe because of uncontrolled mass immigration from Africa and the Middle East only to offer 5 million passports to the Chinese. It is unclear how many eligible Hong Kong citizens will take advantage of Johnson’s offer. The propaganda media spread a number: 300,000 applications so far (January 29, 2021).

Also unclear is whether or not Johnson consulted the English on their support for Chinese mass migration into their kingdom.

London’s calculations have a racial undertone. Hong Kong Chinese will “bring in between £2.4bn and £2.9bn to the UK by 2025.“ Modern slave trade? Is there a gender and age itemization? Why did London reject the 3.5 million Syrian refugees still waiting in Turkish border camps? Maybe because they would probably take out £2.4bn and £2.9bn off the welfare system?

Are people of color less valuable than the Chinese? That would, of course, contradict the European values of former EU Parliament president Martin Schulz, who impeccably stated that “what the migrants bring to us is more valuable than gold.“

Are we witnessing the new trade of human livestock and the emergence of a migration industry? The beneficiary capitalist class, whom Mr. Johnson and Mr. Schulz serve, operates globally and profits from migration games. It’s like playing the stock markets, but with demographics. Shorting China, longing the West. Where will the hypothetical Chinese refugees live in England? London is already 50% non-English.

Maybe London’s Muslim mayor Sadiq Khan has pluralistic ideas. He has made the City more Islamic, but less Confucian. Or the Chinese could move to second-tier Birmingham and Manchester, places not yet as diverse and tolerant as they could be.

We hear from pundits that mass migration can lead to disaster. “Open Immigration Was a Disaster for Rome” (The Wall Street Journal). “Migrants sank the Roman Empire. Now they are sinking the U.S.” (Shreveport Times). But surely that cannot be science, because the West is actually thriving, thanks to its Diversity, Inclusion, Equality (DIE) master plan.

Meanwhile, Chinese authorities in Beijing are baffled by Mr. Johnson’s resolution. China is overpopulated and has 1,400,000,000 citizens. If a UK leader was foolish enough, Beijing would immediately relocate 60 million Chinese to Brighton on the cliff by the Sea.

However, authorities suspect Johnson’s quick money grab: The capitalist elites of the West want to repatriate colonial wealth back to London. Hong Kong had served the British Empire as the Asian hub for money laundering and human trafficking (both Western and Chinese). Mr. Johnson wants to evacuate everything, part and parcel, and ship it to the Crown. That must be it.

Hong Kong was returned to China in 1997, but before the hand-over, Britain made sure it held a post-colonial sway in finance, education, politics, the courts, and the media. So, while Beijing informed its people that Hong Kong has returned, the West told the world that Hong Kong was now independent.

Naturally, when Beijing and Hong Kong act sovereign, Western propagandists report this as oppression and human rights violation. Western media even concocted a biblical Exodus narrative, in which Hong Kongers flee from repressive Beijing and into the holy land: Liverpool in the North on the Left.

Allies are not happy. French President Emmanuel Macron, a former Rothschild banker, warned Boris Johnson’s government: “Half-pregnant is not a concept. What politics does Great Britain wish to choose? It cannot be the best ally of the US, the best ally of the EU and the new Singapore . . . It has to choose a model,” the French president said in an interview with the Guardian.

That was a funny and clever French double entendre. After the British settled in Malaysia in the 19th century, they flooded Singapore with Chinese migrants. British colonialists weren’t exactly going for “half-pregnant“ with Asians either.

English politics look a bit like self-sabotage. It wants to be tolerant, so no racism, please. But surely the English must see themselves as morally superior if they assume foreigners will integrate. What if your former colonial serfs — Africans, Hindus, Muslims, Chinese — secretly hate you, and wait for a reckoning?

Multiculturalism dictates that Western governments diversify their population portfolio. Just a few Africans in sports and music, Italians for authentic Pizza, Pakistani selling Queen Elizabeth memorabilia, Jews in banking, Hindus in call centers, Polish in plumbing, and Chinese in academia is not enough.

The average wealth per head in Hong Kong is $61,000. In Britain, it is only $40,000, according to the World Bank. So, Mr. Johnson is aware that importing a few million Hong Kongers would compensate Britain for possible losses inflicted by the Northern Irish ($30k) or Scots ($36k), should they leave the Union.

In the long term, however, five million Chinese in England could advance the interests of the Chinese civilization, but not the English. Just imagine the unimaginable power of the CCP, the Colonial Cocktail Party, over future parliaments.

Let us hope that Mr. Johnson’s divisive population gamble misfires, because, really, Beijing wants to expand all its trade relations.

No need for Brits to render their homeland.

« The Next Four Years

» Counter-Currents Radio Podcast No. 319 Ask Me Anything with Greg Johnson