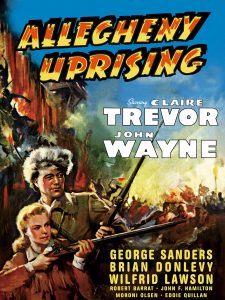 Every movement needs a movie. Liberals have To Kill a Mockingbird, conservatives have Patton, but what about Trump and the deplorables? The movement has anger and followers, but no film — here’s one.

Allegheny Uprising (1939) is a John Wayne and Claire Trevor film based on Jim Smith’s uprising in the Conococheague Valley after the French and Indian War. Wayne plays Smith, a just-released POW. He and Janie MacDougal (Claire Trevor) are in an on-again, off-again relationship. Smith and the Professor (John F. Hamilton) are headed back to the valley on their way west.

Smith and Janie’s romantic escapades end with Indians on the warpath. Smith must lead men to rescue captured children and wipe out the war party. This done, they march to Philadelphia to appeal for troops, also informing Governor Penn (in a wonderful scene where Wayne and his men stride through aisles of dancers at the Governor’s ball after having been denied admittance — certainly a foretaste of insurrectionists going through the Capitol) that an Indian war party used trade goods and other war-making materials in their campaign. Governor Penn agrees to send troops and ban such trade with the Indians.

Callender (a cocky Brian Donlevy) leads the traders, who worry about a loss in profits. Callender proposes that trade continue with the Indians anyway, under army protection. “The purpose of the army,” he says in corporate mode, “is to protect business.”

A fort is built in the valley, commanded by Captain Swanson (George Saunders at his arrogant best). He and Smith were already on bad terms, and when a settler calls Swanson an “uppish gamecock” for his disparaging remarks about Americans, Swanson wants him arrested. Smith steps in, as civilians are not under military law and can say whatever they please. Swanson clearly wants that to change.

Callender sneaks in trade goods on a military convoy. Smith and his friends find out, stop the convoy, separate the trade goods from military stores — and then burn the former. Callender goes one better and orders his men to burn all the goods. When Swanson sees the ashes, he’s ready to go on the royal warpath.

Smith and the settlers discover that with the Indian problem over, they now have a redcoat problem. To counter Swanson’s dragnet, Smith calls the valley to arms. Upon meeting a defiant Swanson, the professor speaks for everyone: “We built your fort, and we’ll not let it be used against us.”

A siege begins. Wayne orders his men not to shoot to kill, but to keep the soldiers pinned down. Exhaustion begins in the fort. Swanson surrenders and leaves. Callender and his traders are pulled out from the column, whipped, and their goods are burned. Swanson returns with more troops, jails dozens of settlers, and Smith leads a nighttime assault to free the captives. Once again, Swanson is bested. Smith, framed for murder by Callender, is arrested and jailed.

Janie leads an armed mob to break Smith out, but he refuses to go, letting the professor speak: “In defending one law, we’ve come to despise all laws.” Smith orders everyone to let the trial go on. The mob disperses.

At trial, Smith’s lawyer (the valley’s magistrate) proves the murder was a set-up, but Swanson tries to control the military court. General Gage arrives and, determined to keep the peace, dismisses the charges. There is peace between redcoats and settlers. For now, Gage uneasily ruminates. Smith and the Professor are off for Tennessee, Janie charging after them, but there’s the expectation Smith might return if needed.

Allegheny Uprising is a fast-paced movie at eighty minutes with a lot of good performances and comic relief, especially provided by Wilfred Lawson as MacDougal, Janie’s innkeeper father. (In the film, “go to MacDougal’s” is the cry to assemble for action.)

MacDougal’s battle cry is “Cooeeoh,” to any endeavor. Actually, it was the name of a mixed drink in eighteenth-century New England, much like “Tequila” might be the war cry of frat kids at spring break.

How is Allegheny Uprising a Trump movie? It’s a good populist narrative about fighting imperial and corporate interests. Smith doesn’t intend to start a war, but he consistently backs the rights of the settlers. The attack on the fort isn’t to kill, but to force a surrender. He’s not being Rambo, but Clausewitz. He also isn’t an egotist. When someone like the professor has good advice, he follows it. Smith always has the local magistrate with him to demonstrate that British actions violate the law. The magistrate isn’t for sale, either; when he is in Philadelphia and Callender tries to buy him off, he refuses and gallops back to warn Smith.

The uprisings succeed because the settlers are local. It’s their land, they aren’t spread out in any kind of suburbia, and they bond together. When they hear the battle cry, they grab their guns and assemble.

The media is in the hands of Callender and the traders. They print leaflets depicting Smith and the settlers as drunks and rabble. As Callender explains to the journalist: “you gotta make it plain. These people are thickheaded.”

Swanson isn’t really cruel, but he has tunnel vision, enforcing rules with no sense of the local situation or how he can be manipulated. Swanson sees subjects, rather than people. He’s the king’s hammer, and the Americans are nails.

Smith is careful with the British, but with the real enemy — the Indians — he and the settlers are ruthless. When he needs to use force, he does so immediately and without hesitation.

The film didn’t do very well at the box office. Some thought it was too anti-British — the Second World War was on the horizon, and some anti-British scenes were cut out. A scene at the fort depicting Swanson shaking a dozing soldier awake was done to make him sympathetic.

Allegheny Uprising has things to consider as we start gliding out of the Trump era into that dark winter happily foretold by his usurper; a man who is true Callender material. It is a John Wayne film, but one where the Duke rouses a community to defend their rights and survival in face of imperial interests.

It’s a good popcorn movie, and I give it a rating of four “Cooeeohs.”