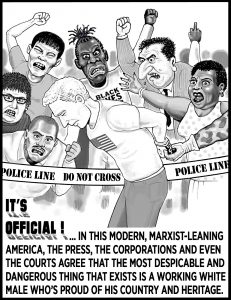 I fell asleep early on Election Eve because I lost faith in the federal government — and the very idea that the United States was a sustainable nation — years ago. Ever since November 3, I’ve been disinterested in the issue of election fraud because I don’t think there’s much of an “America” that’s left to save. My gut feeling is that no matter who got elected president, we’re already well into a post-American phase and that the USA is a bankrupt and irredeemable enterprise. What good is one last round of chemo if the patient is already terminal?

But on Wednesday when I was informed that a jolly band of MAGAteers had stormed the Capitol building in DC, I switched on the livestreams and paid close attention.

My initial gut reaction was not one of sudden empowerment and a sense that we, the people had finally taken action. Instead, it was a deep sense of queasiness at the inevitable blowback. As a part-time student of history, I’m painfully aware of how governments react when you try to overthrow them and fail.

Before you commence with the inevitable barking and name-calling, I need to clarify that I don’t think what happened was morally wrong — I don’t make moral judgments, ever — but I think it was tactically shortsighted to the point of absurdity.

I realize that many of the people who showed up in DC at Trump’s behest to protest what they see as a stolen election — only for him to stab them all in the back — were acting out of a deep sense of betrayal and alienation. Many of us do things that feel fantastic in the moment but wind up affecting us negatively for a lifetime. I can personally bear witness to the fact that finally losing your temper and hitting someone who’s been persistently threatening, attacking, and taunting you feels fantastic — until you wind up in prison for it.

When I told Atlanta-based lawyer Sam Dickson that I’d be writing about the Capitol Siege, he insisted that my task was to set the record straight and correct all the rampant misinformation. He also told me I should point out the hypocrisy of the same people who talked about “peaceful protests” and killing cops all summer were now calling this a “riot” and cheering on the fact that a cop — apparently a black one — shot a white woman dead when she was already surrounded by police and posed no direct physical threat.

I became a writer because I care about the truth. It took about thirty years before I realized that hardly anyone shares my concern. It took the same amount of time to realize that people only care about being on the side of power — or at least on the “good” side as they fight the “evil” people who currently hold power — and feel absolutely no shame when you point out their egregious hypocrisies.

But as the saying goes, truth is the first casualty of war. And if you’re lying bleeding on the ground because you’ve just been shot, I doubt you’ll find much comfort in the fact that, hey, at least you weren’t a hypocrite.

Morality doesn’t win wars. Neither does being factually correct. Being the most efficient killer is what wins wars. So does monopolizing the propaganda outlets.

Did the people who stormed the Capitol on Wednesday have any idea what the fuck they were doing, or was it all a big video game and selfie opportunity for them? What they did was the equivalent of crossing enemy lines in the midst of a war, only to fart loudly on camera. Did they think they would frighten Congress into reconsidering the topic of election fraud? Well, it backfired. Badly.

I’ve never staged a coup nor plotted a coup, but my instincts tell me that if you’re going to attempt one, take it to its logical conclusion. If you don’t, you’ve greatly strengthened those you were trying to overthrow. This might have been the most half-assed attempted coup in world history.

What’s bitterly ironic is that this failed coup was staged by many of the same people who have been acting like frigid schoolmarms and sternly lecturing us about “optics” ever since Charlottesville. Well, what happened Wednesday was a textbook display of mental optardation. If your whole shtick involves worshiping cops and touting “law and order,” it’s bad optics to bludgeon police, one of whom allegedly died from being smashed in the skull with a fire extinguisher. If you worship the Constitution, it’s bad optics to construct a gallows with which to hang elected officials. It’s bad optics to gloat about how you’re going to blow out Nancy Pelosi’s brains on live TV.

If good optics is about winning over the normies, polls show that anywhere from 71% to 92% of normies disapproved of what happened Wednesday. If good optics are about uniting Republicans to fight the Democrats, a YouGov poll found that Republicans were evenly split about what happened — 45% supported it and 43% opposed it. This latest stunt definitely did not “unite the right.”

The normally Trump-friendly New York Post predicted that this event will be used to discredit everything about Trump and his supporters from here until the end of time:

On Wednesday, Jan. 6, a line was drawn in the sand. Before that date, critics had unfairly slammed Trump supporters for being violent, resentment-fueled lunatics for four years, but they couldn’t point to any major proof of it. . . . Then, on Jan. 6, the critics were proved right, as thousands of Trump fans — goaded by the president during a rally — encircled the US Capitol and stormed it while Congress tried to certify the election. . . . Trump condemned what happened. These people risked their lives for someone who didn’t have their back.

That’s the most startling, sad, and contempt-inducing thing about Trump’s continued support — I wonder how many times he needs to disavow these people before they finally get the hint.

The blowback has been swift and predictable, and it’s only begun. Trump was banned from Twitter, and by the time this essay sees the light of day, the MAGApede Twitter alternative known as Parler will probably have been permanently shuttered.

Noted ex-German political sage Arnold Schwarzenegger compared the siege to Kristallnacht. BuzzFeed — for once — did a cop-sympathetic piece about how black Capitol Police had to deal with “Racist-Ass Terrorists,” but the article didn’t make a peep about how one of those cops shot a white woman dead. Senator Dick Durbin resurrected his “Domestic Terrorism Prevention Act,” the first line of which reads as follows: “White supremacists and other far-right-wing extremists are the most significant domestic terrorism threat facing the United States.”

Problem is, that’s not much different than Trump’s position. He rewarded black America for rioting all summer with a $500-billion “Platinum Plan,” while he never once addressed white Americans as a political constituency and his Justice Department aggressively targeted white nationalists.

I fully expected the gaslighting, deplatforming, and utter contempt for free speech to get worse under Biden. What I didn’t expect was that a group of Trump supporters would hand-deliver Biden and everyone who’s propping up his carcass an excuse to feel justified about bringing the boot down on our necks that much harder. From now on, the powers that be will equate any allegations of electoral fraud with violent domestic terrorism. In war, truth doesn’t matter. But it’s dumb to hand your enemy a loaded gun, then walk away claiming victory.

I suspect that a lot of die-hard Trump supporters are caught in a spiral of cognitive dissonance because if there’s one thing humans hate doing, it’s admitting that they were suckered.

Some say that the federal government’s power is not insurmountable and that the very fact that protesters were able to penetrate into the Capitol building exposed the government’s vulnerability. But what if, just like Charlottesville, they walked right into a trap?

If there’s anything positive to come out of what happened on Wednesday, it’s the remote chance that millions of people became aware that the government sees us as enemies whether we like it or not. It’s impossible to work within a system that’s designed to eliminate you.

Violence and propaganda are the only things that win wars, and all governments exist to monopolize violence. Voting only gives you the false impression that your voice matters. When there is no apparent political solution and no common ground, things tend to get violent.

They taught me back in journalism school that the only speech the First Amendment does not protect is when one calls for the immediate violent overthrow of the government. By that standard, the Declaration of Independence was an Anglophobic document consisting of nothing but violent white-supremacist terrorist hate speech.

So although I realize that violence is what makes the world go ’round, I’m not so naive that I’d directly advocate violence. I’m simply observing that the pretense of democracy shrouds the reality that the main business of government is to monopolize violence.

I’m a fighter by temperament. Social ostracism doesn’t shut me up. Attempts at shaming don’t shut me up. Multiple near-death experiences haven’t shut me up. The only thing that could shut me up is a bullet to the head, Ashli Babbitt style.

I wonder how many others are fighters, though. The imminent clampdown is going to be insane. We’re heading into a dark blizzard, and if there’s even a remote chance of turning the tide, I’d suggest all you nitpicking purity-spiralers put aside the endless doctrinal infighting and focus instead on the common enemy. This isn’t about scene status — it’s about life and death.

Until very recently, Ukrainian lightweight boxer Vasily Lomachenko was considered the best pound-for-pound fighter in the world — almost unbeatable. In the run-up to his recent bout with Brooklyn-born Teofimo Lopez, he warned that his opponent was in over his head:

“I don’t think he fully gets it. It seems to me that he doesn’t understand. I hope to drag him into deep waters, down to the bottom, and keep him underwater without air.”

Lopez wasn’t intimidated. He beat Lomachenko and snatched all four of his championship belts.

I suspect the federal government is gearing up to drag us into deep waters and keep us underwater without air. But until you stop trusting the plan and realize the government is not your friend, you are all doomed to drown.

I hope I’m wrong here. I take no comfort in suspecting that I’m right. In fact, it’s the worst feeling in the world.