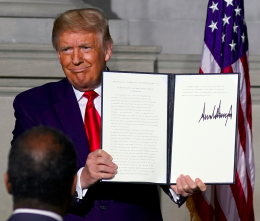 One of President Trump’s last acts in office offered his view of American history. Just a few days before Joe Biden’s inauguration, the Trump administration released both the 1776 Commission Report and the list of statues for the proposed National Garden of American Heroes.

Both were well-intentioned efforts designed to counter the poison of Leftist historiography — but both fail to do exactly that. The effort amounts to little more than a boomer clinging to the last vestiges of Cold War civic nationalism.

The project [2] appeared promising at first. “On this very day in 1787, our Founding Fathers signed the Constitution at Independence Hall in Philadelphia. It was the fulfillment of a thousand years of Western civilization. Our Constitution was the product of centuries of tradition, wisdom, and experience,” Trump said at the September ceremony announcing the initiative. He lambasted the anti-Americanism of Leftist history — specifically naming the notorious 1619 Project — and how it poisons the minds of the young. “Our mission is to defend the legacy of America’s founding, the virtue of America’s heroes, and the nobility of the American character,” the then-president added. He pledged to create a curriculum that will effectively counter liberal lies and turn our young students into ardent patriots. He also vowed to erect a garden of statues dedicated to American heroes.

This project solidified Trump’s campaign pitch as the defender of the historic American nation. He would restore our nation’s sense of itself and banish anti-white racism from the classroom. His history would inculcate patriotism and dispel the detritus of past indoctrination.

But his initiatives fall short. They attempt to reanimate the rosy history of Cold War liberals and see America as a Conservative Inc. fantasy. The 1776 Report [3] denies an ethnic or cultural basis to America’s founders.

“They were neither wholly English nor wholly Protestant nor wholly Christian,” the report claims. “Some other basis would have to be found and asserted to bind the new people together and to which they would remain attached if they were to remain a people. That basis was the assertion of universal and eternal principles of justice and political legitimacy.”

Yes, the 1776 Report’s grand proposal is that America was founded on “ideas” — something conservatives and liberals have repeated ad nauseam since World War II. According to the report, our key founding principle is equality. The 1619 Project [4] makes the same claim, except the New York Times’ series acknowledges the racialism of the founders. The 1776 Report pretends the Founders were colorblind conservatives. The Trump-approved report is filled with tripe such as this:

To be an American means something noble and good. It means treasuring freedom and embracing the vitality of self-government. We are shaped by the beauty, bounty, and wildness of our continent. We are united by the glory of our history. And we are distinguished by the American virtues of openness, honesty, optimism, determination, generosity, confidence, kindness, hard work, courage, and hope.

Does any nationality claim to not be something noble and good? America’s alleged virtues sound like they were plagiarized from a self-help book for middle-aged women. The founding stock was certainly not open to Indian marauders.

The report’s discussion of identity politics may be its most risible element. It blames minority identity politics on — you guessed it — racist Democrats: “In portraying America as racist and white supremacist, identity politics advocates follow Lincoln’s great rival Stephen A. Douglas, who wrongly claimed that American government ‘was made on the white basis’ ‘by white men, for the benefit of white men.’” Douglas, unlike the 1776 report, spoke the truth. The report’s chief identitarian villain is John C. Calhoun, the political titan of the antebellum South. Calhoun’s beliefs, as described by the report, are more insightful than any of its silly arguments.

Rejecting America’s common political identity that follows from the Declaration’s principles, he argued that the American polity was not an actual community at all but was reducible only to diverse majority and minority groups. Calhoun saw these groups as more or less permanent, slowly evolving products of their race and particular historical circumstances.

Calhoun’s vision sounds like a more useful guide for the American Right than anything the 1776 Commission proposes.

On top of the demonization of great white politicians, the report worships a false image of Martin Luther King [7]. Instead of accurately portraying King as a race hustler who supported identity politics and wealth redistribution, the commission treats him as a colorblind conservative: “King refused to define Americans in terms of permanent racialized identities and called on Americans ‘to lift our nation from the quicksands of racial injustice to the solid rock of brotherhood’ and see ourselves as one nation united by a common political creed and commitment to Christian love.” The report claims, like all conservative historiography, that the Civil Rights Movement went off the rails following King’s death. If any of the scholars involved had read Christopher Caldwell’s Age of Entitlement, [8] they would’ve understood that’s an erroneous distinction: the latter Civil Rights Movement, including Black Lives Matter, is a natural outgrowth of King’s work.

Despite the report’s goofy analysis and conclusions, it was still dubbed “racist” by the mainstream media. CNN, for instance, called it a “racist school curriculum [9]” because it criticized affirmative action and identity politics. Journalists no longer have to fear it after Joe Biden quickly rescinded it on his first day of office.

The report was not just the work of Trump administration interns. It was overseen by heavy hitters from the Claremont Institute, Heritage Foundation, and Hillsdale College. The 40-some odd pages embody Conservative Inc.’s view of America and its history. It demonstrates how flawed and stupid movement conservatism is.

The National Garden of American Heroes [10] is even more embarrassing. This proposal would erect at least 100 statues to honor our history. One would think that this would be America’s answer to the German Empire’s Siegesallee, which displayed great statues of Prussian leaders and heroes. Instead, the Garden mixes American presidents with random entertainers and black athletes. If ever built, you would see Andrew Jackson standing aside Kobe Bryant, Whitney Houston, and, for some reason, Hannah Arendt. The list may as well have included the Hamburglar and Scooby-Doo. Are they not great icons of American culture as well?

The list of heroes reads like a small group of boomers jotted down their favorite figures and added some random presidents as well. The garden would stand as a joke rather than an inspiration. No serious country includes basketball players and drug-addled singers next to great generals and statesmen.

The 1776 Commission and the Garden of Cringe reveal conservatives’ failure to grapple with reality. The Cold War consensus is never going to return. It makes no sense to continue to lie about the American founding. The 1619 Project is insidious, but at least it’s honest about the inherent racialism of our nation. Conservatives would do much better to emphasize the founding people rather than supposed founding principles. They were white men, primarily British, fighting for their independence from a foreign power. As John Jay stated, to the consternation of the 1776 report authors:

Providence has been pleased to give this one connected country to one united people — a people descended from the same ancestors, speaking the same language, professing the same religion, attached to the same principles of government, very similar in their manners and customs, and who, by their joint counsels, arms, and efforts, fighting side by side throughout a long and bloody war, have nobly established general liberty and independence.

Principles can change and easily be reinterpreted over time. So long as the people remains, the nation lives on. If the people changes, then the nation changes — no matter how much the current regime preaches the gospel of foundational principles.

Conservatives would do better to follow Stephen A. Douglas and John C. Calhoun rather than Martin Luther King. The former embraced the Founders’ vision, the latter sought to overturn it. Conservatives offer no serious alternative to the 1619 Project if they cling to King and gush over equality. Those poisonous traits are how we got to the anti-white history that reigns today.