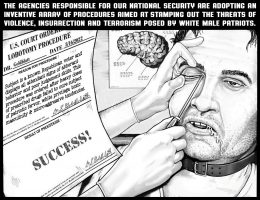 I attended the last presidential inauguration because I wanted to.

Even if I had wanted to, I couldn’t have attended the weird Carnival of Masked Corpses in DC this time around because I’m man enough to admit I am no match for 25,000 National Guardsmen and rings of barbed wire wrapped around the Capitol like so much Christmas garland.

When his three remaining strands of white hair weren’t blowing in the January wind, Joe Biden spoke of [2] “a rise of political extremism, white supremacy, domestic terrorism that we must confront and we will defeat.”

Can anyone tell me where all this white supremacy is occurring? Maybe it’s my internet connection, but I’m having a really hard time finding it.

Biden bemoaned “the sting of systemic racism” and gave a token nod to Martin Luther King, Jr. — who, according to Ralph David Abernathy, beat up a white hooker in his motel room the morning of his assassination.

The new president’s handlers trotted out a 22-year-old poetic Negress [3] who spoke of her “bronze-pounded chest” and how America is great because “a skinny black girl descended from slaves and raised by a single mother can dream of becoming president, only to find herself reciting for one.”

Two weeks earlier, the Capitol was besieged and invaded by a mostly white crowd who made no point about their whiteness, which naturally didn’t stop the professional media soothsayers from blaming it ALL on their whiteness.

Even the ones who weren’t white were accused by a half-cocked self-identified “Latinx” NYU professor of engaging in “multiracial whiteness [4]” — “the promise that they, too, can lay claim to the politics of aggression, exclusion, and domination.”

Scientific American [5] — which, if memory serves, denies the very existence of race — somehow claims the ability to spot “white males” anyway, asserting that “science” can explain Trump’s “grip” on them, a grip so strong that he hypnotized them into storming the Capitol.

Not merely drunk on power, some Leftists are absolutely shitfaced on their new victory and are calling [6] for a nationwide “army” of snitches to monitor the behavior of Trump supporters and report it to local authorities.

Writing for the Daily Beast, a certain Jeff Stein claims without a morsel of evidence that our huddled masses currently shiver in fear beneath “a cloud of more and widespread white nationalist attacks.” Stein implores the feds to set up a nationwide network of “secret police” to “stop white terror [7]” and deliver a WWF-style smackdown on all those gun-toting “Bubba Boys.”

Our friends at the Pentagon [10] are “intensifying efforts to identify and combat white supremacy and other far-Right extremism in its ranks as federal investigators seek to determine how many military personnel and veterans joined the violent assault on the Capitol.” This noble cause will be greatly accelerated by the fact that Biden has nominated a Defense Secretary who, if approved by Congress, will be the first Negro in that position throughout American history.

Gushing with unbridled ethnic glee about a Cabinet that is top-heavy with ethnic kinsmen, kinswomen, and even a kinstransperson, the Jerusalem Post [11] described one nominee as “the stepson of a Holocaust survivor whose stories shaped his worldview,” another as having “long been involved in Jewish causes and issues,” another whose grandparents “fled anti-Semitism in Europe,” a son of Holocaust-escapers who “has worked closely with Jewish groups and spoken often about the specific threats facing American Jews,” another who is an “Orthodox Jew originally from Brooklyn and educated through college in Orthodox schools,” one whose former role was “hewing the Democratic Party platform to traditional pro-Israel lines,” and one who “has spoken about his commitment to raising Jewish children.”

I’ve heard of overplaying one’s hand, but apparently it’s impossible to over-Jew it.

Effusive friendliness toward Jews and blacks is one thing that will not change with the transfer of power.

Anyone who risked their necks on behalf of Trump during the Capitol Siege will be crestfallen to hear that he didn’t pardon any of them [12].

And then came the “Jews pardoned by Trump [13].” Hey — don’t crucify me for noticing. I read Jewish newspapers for a living. He pardoned crooks and spies and swindlers with names such as Aviem Sella, Sholam Weiss, Abel Holtz, Eliyahu Weinstein, Noah Kleinman, Drew Brownstein, and Hillel Nahmad. He also pardoned a whole shul’s worth of other Jews whose names weren’t quite as Jewy.

Last Monday, as one of his final official acts as president, Trump proposed a “National Garden of American Heroes” featuring statues “built to reflect the awesome splendor of our country’s timeless exceptionalism.” Among the hundred-plus proposed statues were 19 black “heroes.” One was Muhammad Ali, who was vocally opposed to race-mixing [14]. Another was jazz musician Miles Davis, who reportedly [15] once said “If somebody told me I only had one hour to live, I’d spend it choking a white man. I’d do it nice and slow. If I got tired I’d stop, have a glass of water, and choke him some more.”

Amid the deafening ’round-the-clock industrial noise about white violence, chances are that this is the first you’re hearing about that little nothingburger of a story, though.

Definitely the Worst Week Yet.