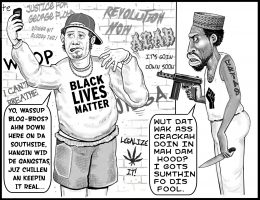 To be young and white in America right now is to walk through life with a black cloud hovering over your head with every word you utter and every step you take.

One major cultural shift over the past generation is that except for a few isolated hills and hollers in Appalachia and the Ozarks, there is effectively no such thing as “poor white culture” anymore. Although low-income whites have been forced to coexist alongside blacks for centuries now, in the past they at least retained semblances of their own unique culture.

Whereas the perennially maligned “rednecks” and “white trash” used to comprise an identifiable subculture with music, slang, and aesthetics that clearly delineated them from black Americans, the past generation has made it clear that whiteness is cancer and to identify with it in any way is to invite an immediate pummeling and eternal social ostracism.

Therefore, all the white kids who would have been cultural “rednecks” not so long ago are almost entirely wiggers now. Black culture is the culture of the American poor, regardless of race. If you’re young, white, and live in a trailer park, you’re going to talk like a Negro.

Then again, it’s not as if it’s acceptable to be rich and culturally white, either. No matter your economic status, you will eventually face consequences for “acting white.”

But you will also face consequences for “acting black.” The game has been rigged so that white people can’t win no matter how they act or how pure their intentions may be.

Since some point in the mid-1980s, I’ve watched with bemusement as whites were scolded for shunning black culture. Then, when they eagerly embraced American black culture’s endlessly inane mannerisms and argot, they were chastised for “stealing” it.

Two stories that emerged at the tail end of 2020 illustrate that in 2021, there will be no safe space for wiggers. One story involves a poor white male; the other regards an affluent white female. And they’ve both had their lives destroyed not for acting like KKK members, but for acting black — one because he apparently grew up in the ghetto, the other because she listened to a lot of rap.

In Ohio — one of the nation’s persistently bleakest states — a video of a burly black man smashing a skinny young white male’s face with a can of Twisted Tea before pounding him into the floor went viral last week. A smartphone video [2] filmed by a white woman at a Circle K store in Elyria, OH, begins in media res with an agitated young white male standing at the counter and peppering every third word out of his mouth with a gratuitous “nigga.” The young white male is either intoxicated or mentally impaired — possibly both.

The black man who committed felony assault live and on camera is named Barry Allen [3]. He is not hiding from police — he actually bragged of the assault, and his wife was so proud of him beating the stuffing out of that N-bomb-tossing young white male that she started a Twitter profile calling herself “MrsTeaKO [4],” where she is currently basking in praise for her husband’s decision to administer racial street justice through violence.

Barry Allen recounted the altercation to a reporter:

As soon as I walk in, he’s standing with his friends, I was assuming, and calling the employees, two black guys, niggers. I’m like, all right. Let’s just hope he leaves by the time I get up there. . . . So, I ignored it. . . . [When I got to the counter], he’s still there, still saying the word like he was just a normal black guy having fun with all his buddies, just chilling. And you could tell by their faces they wasn’t really feeling it, but they can’t say nothing ’cause that’ll put their job on the line. . . . Me, I didn’t feel that way. I’m like, “C’mon bro, stop saying the word. Why you shouting out ‘nigger,’ bro?”

The still-unidentified young white male responded that he lives only two blocks from the store, implying that since he resides in the ghetto and essentially lives a black existence, he’s entitled to use the word. He told Allen, “You ain’t my mama. My mama let me say the word.”

At that point, Allen said, “Fuck your mama.” He also referred to the white male as a “nigga.”

After Allen threateningly brandishes a can of Twisted Tea, the white male invites him to smash him in the face with it, liberally tossing nonstop “niggas” at him. Allen loses hold of the can, and it falls to the ground. When the white male attempts to kick it, Allen grabs it again and smashes the white boy square in the jaw with it, knocking him down. The white male bounces back up, puts up his dukes, and Allen quickly wrestles him to the ground before repeatedly punching him in the face and forcing him to cry uncle.

To me, the most appalling part of the video is hearing the woman who’s filming the altercation — she sounds white — taunting the white male with “Yeah, you got yours, buddy” while he’s being beaten and then congratulating Allen by saying, “I don’t blame you, dude” after the beating is finished. She posted the video within seconds. Allen — who, like the wigger he beat up, claims to live only two blocks from the store — said that within the minute or two it took him to drive home, his wife had already seen the video online.

Ohio police [5] say they have identified both men in the video but have yet to bring charges. As you might imagine, social media is treating Allen as a heroic justice warrior in the time-honored vein of W.E.B. Du Bois, Marcus Garvey, Nelson Mandela, Bishop Desmond Tutu, and George Floyd.

The other story from last week that shows it’s fatal to be a wigger in modern America comes from Leesburg, VA. Back in 2016, a white girl in her mid-teens named Mindi Groves made a three-second video [6] on Snapchat announcing that she’d gotten her driver’s license — “I can drive, niggers” is all she said.

Trying to muster all the objectivity I can manage, I sense that she was not insulting black people — instead, she was trying to sound black because she’s grown up in an environment where black people are worshiped and can do no wrong. When her life fell apart recently due to this five-year-old video being reposted online, she said she used the word because she listens to hip-hop and it’s used in every song. She sincerely didn’t seem to see why it became such a big deal.

Groves’s dream was to be a cheerleader. Her dream nearly came true when she was accepted at the University of Tennessee, which is said to have the nation’s top-rated cheerleading squad.

But her dreams were smashed to pieces this summer by Jimmy Galligan [7], a light-skinned, freckle-faced mulatto with a penchant for cross-dressing [8].

Galligan, who was a high-school classmate with Mimi Groves, told the New York Times [9] that he only became aware of the video last year but sat on it and waited until he could unleash it to inflict maximum damage on her.

This came over the summer, when Groves urged her followers on Instagram to “protest, donate, sign a petition, rally, do something” to support Black Lives Matter during the George Floyd riots.

Shortly thereafter, someone that Groves claims she didn’t know wrote, “You have the audacity to post this, after saying the N-word.”

The inevitable social-media torch mobs swooped down on Groves, and the University of Tennessee informed her that she could either voluntarily withdraw from the school or they would rescind their offer of admission. She chose the former and is now attending community college, whereas Galligan — who has a white father that he routinely scolds for “white privilege” — is attending college in sunny California.

As if he consciously intended to put the finishing touches on the Wigger Holocaust right at the end of the Worst Year Ever, Vanilla Ice [10] — the world’s most famous and successful wigger — entertained a crowd of mostly geriatric males and young coked-up women with fake tits on New Year’s Eve at Donald Trump’s Mar-a-Lago club in Florida. Although Trump was said to have skipped the event entirely, Donald Trump, Jr. is shown in the crowd eagerly singing along to not only “Ice Ice Baby,” but also Mr. Ice’s cover of Wild Cherry’s proto-wiggery 1976 disco anthem “Play That Funky Music,” whose refrain is a thunderous “Play that funky music, white boy.”

While that moment, more than any other I’ve ever witnessed, may represent the End of Whiteness, one may be forgiven for hoping against hope that it only marks the nadir rather than the death knell. I encourage you all to hug your George Floyd anti-stress dolls [11] and wish for a more propitious 2021.