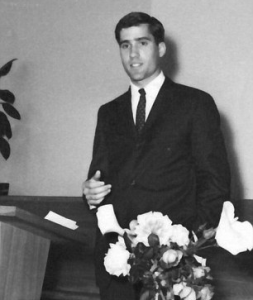 Romney as a missionary to France in the 1960s

Anti-whiteness is a fact of life in America. Many whites who want to go to a good college, get a good job, or just be considered a better person will attempt a flight from white. They will try to find some non-white identity they can grasp onto, or pretend a perfectly white ethnicity (such as Italian or Polish) make them non-white. Others will cling to an identity that just makes them a special minority, whether it’s their religion or their sexual orientation.

One white group that embraces minoritization is Mormons. The Church of the Latter-Day Saints has always faced hostility from America’s majority. They were literally hunted down and murdered in the 19th century, but today they mostly face jokes rather than lynchings. For the last 100 years or so, Mormons have worked hard to depict themselves as the ultimate white Americans. They stressed service in the military, hard work, thrift, sobriety, faith, conservative social values, and clean-cut attire. They strived to meet the stereotype of 1950s Americana. And unlike every other church, they explicitly defended white interests [2]and opposed integration in the 1960s. In more recent years, they served as the bulwark against gay marriage.

The last fight, along with their traditional American image, endeared them to many conservatives. The white majority no longer saw them as dangerous heretics, but as defenders of the historic American nation. However, Mormons no longer want to be uber-white Americans; they want to assimilate to the new, diverse order. They now characterize themselves as a persecuted minority that stands with the Other. They support mass immigration and oppose Trumpism. They’re now the ultimate white suburbanites who vote Democrat to restore “decency.”

This new approach was highlighted in a December essay in the Atlantic. Political journalist McKay Coppins, a Mormon, wrote how Mormons became American [5]. Coppins argues his co-religionists assimilated to an American ideal that no longer holds weight. The Anglo-Protestant culture is dying and middle-class values are held in contempt. The current ideal is Black Lives Matter, a movement the Mormon church supports. Coppins insists throughout his piece that Mormons are a minority group. He shares his own experiences growing up and being teased for his faith at school. He recounts the hostility that he faced as a missionary from random strangers. He was particularly incensed by a past employer stereotyping Mormons in a company-wide meeting. He writes of his disappointment with Mitt Romney not emphasizing his particular faith during the 2012 presidential election. According to Coppins, Romney’s all-American persona, the same one cultivated by the church, proved to be a liability rather than an asset. The rest of America was no longer like Leave It To Beaver, and the Republican’s image seemed too anachronistic for voters.

Coppins laments Mormon deference to the American majority and its tolerance of slights. When told that the reason his church did nothing about The Book of Mormon musical was because they lacked cultural cachet, he had a revelation about Mormon niceness. “It was a coping mechanism, born of a pulsing, sweaty desperation to be liked that I suddenly found humiliating.”

The essay strongly implies that Mormons need no longer cope — they just need to reform themselves to better advocate for minority groups. Coppins praises the church for standing with BLM and working with groups like the NAACP, but he believes more work must be done. He supports more black leaders and more “anti-racism” theology from the church. Coppins also wants Mormons to support homosexuality, even though leaders say it violates biblical law. The journalist thinks the Bible and church teachings should matter less than the interests of his own class.

Coppins concludes his piece with the hope that Mormons can offer an example for a troubled America: “What holds the country together is its conviction in certain ideals — community, democracy, mutual sacrifice — that it once possessed, and now urgently needs to reclaim. If Mormonism has anything to offer that effort, it will have to come from a confident Church, one that is unafraid of owning up to its mistakes and embracing what makes it distinct.”

The church essentially offers “decency” to the nation, but it is a decency that allows intruders to walk over us. The Mormon Way makes you smile as a black guy pummels you. It’s why liberals now have a strange new respect for the caffeine abstainers. They’ve forgiven Mormons for their opposition to gay marriage and cherish their support for mass immigration and hostility toward nationalism. Mormons now see themselves as one of America’s many minorities rather than the arch-defenders of old stock America. They will stand against Muslim bans and other measures that harm their fellow minorities. This is how you assimilate to the New America.

Mormons are more problematic than Methodists because its members actually follow the church. The vast majority of Protestants and Catholics in America ignore what their church leaders say on politics; Mormons don’t. While nearly all Christian denominations endorse mass immigration and Black Lives Matter, the Mormon flock is more inclined to take that endorsement to heart. Mormons risk ostracism from the community if they don’t toe the line.

Minoritization is a tempting strategy for whites. White privilege them nothing except denied job opportunities and endless lectures. Becoming a minority gives you elite status and allows you to signal your allegiance to the rainbow coalition. Most whites don’t have the Mormon advantage, but they can seek other avenues to minoritization. It could be their sexual orientation, their preferred entertainment, or maybe even their ethnicity (“The Irish are not white! [6]”). Mormon minoritization is going to make them hostile to any attempts to save the historic American nation. The church hierarchy cares too much about assimilating to multicultural America to resist it. The new America will reward them by demanding they change their teachings on gays, but will at least pat them on the head for being good Christians.

There is one positive lesson to take from the Mormons. Many on the Right like the idea of a “Benedict Option” where we try to escape society through isolated communities. I’ve previously argued against [7] this as a bad model for us. The Mormons present an alternative model. They no longer run to the hills and pretend their compound is the entire world. They go forth in the world and obtain influential positions. This has helped dispel their past pariah status and earned them clout within our society. They still have their communities, but they extend to the halls of power. They don’t try to escape the world — they try to shape it.

That power helped them to defeat gay marriage. Now it’s being used to import more immigrants.

The Mormons believe their power depends on their subservience to the present order. That will make them a foe to our cause.

Maybe the old Protestants were right to see Mormons as a threat back in the 19th century.