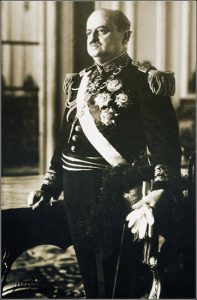 For my friends, anything.
For my enemies, the law.

That epigram is attributed to a fellow named Oscar Benavides. Señor Benavides during the 1930s was the President of a Banana Republic with the official name of Peru. I stumbled across this cynical, but candid stab at a compressed management philosophy recently and concluded that it should be the entirety of Joe Biden’s Inaugural Address later this January. This assumes that his medication has kicked in and he is coherent long enough to get him through the brief recitation and past the oath of office.

Nine, mostly one-syllable words; two short sentences. It will take him five to ten seconds to mumble them out, assuming . . . well, you know — and it’s all he needs to say. Joe would be plagiarizing, but it’s not like he hasn’t done it before. He can always use Hillary Clinton’s most memorable dodge: “What difference at this point does it make?” Yes, “at this point,” I think the rap sheet of the new President should be less concerning to us than his soon-to-be replacement who “casting-couched” her way into politics. If you have been worried about your future, think about what she has planned for her “friends” and “enemies.”

The Benavides badinage is perfect for the Inaugural occasion because it is backward-looking and reflective. Joe has been busy helping his “friends” since before the Eagles released “Witchy Woman” back in 1972. It points to the future that awaits those “deplorables and irredeemables” fingered for retribution back in 2016. Having said all this, it may be necessary for the incoming President to tweak the message slightly. I would suggest:

For my friends, family (especially Hunter), and the systemically oppressed Congressional Black Caucus folks, anything. For my enemies? I don’t need to tell you who they are. My good friends at CNN, the NYT, WaPo, plus Mitt, Jeff, Ben, and some other people whose names I can’t remember have taken excellent care of that part. Where was I? Yes, for my enemies, the law. I’m already getting lots of good suggestions for what should be done to them. No, I mean, how the law is going to make them for us less deplorable. Or else! Thank you, and God bless . . . you know, the thing.

I understand. This is a lot longer than the original, but I think he can still slog his way through it and get back home in time for his afternoon nap.

Post-inauguration, the recovery of “our democracy” from the usurpation of The Donald will rely on the Benavides-Biden doctrine of governance — “The Mailed Fist Cometh.”

Those of you deplorables and irredeemables out there probably thought that you were already experiencing the mailed fist for the last several years. That’s understandable. With the Covid-19 lockdowns, systemic racism at the top of the agenda, statues of evil white guys being torn down, and Antifa and BLM rioting and burning down parts of the big cities, you must be wondering how much more “mailed fist” can it get?

I have news: This has been the velvet glove treatment from the political establishment for some time. The mailed fist is on the way. Here is what it is going to look like.

Hillary Clinton’s “deplorables, irredeemables” comment signaled what was coming. But we often forget the sheer nastiness of this slur in how she finished it: “thankfully, they are not America.” Donald Trump was the little Dutch boy with his finger in the dike. But he and his finger are gone now. The dike has crumbled, and the Democrat sea has flooded in with the Republican leadership scrambling into their lifeboats still blabbering away about “racism.” The Democrats, on record as regarding millions of Trump voters as “not America,” will now have few obstacles to “systemically” removing us from America. Remember, we are “irredeemable.” Think back over the last hundred years or so about what happens to “irredeemables” when the virtuous ones get put in charge of them, starting with Lenin. Lots of specifics are for perusal in the Black Book of Communism.

Our purge has been underway even under the little Dutch boy. Our cultural heritage is under assault: statues and monuments demolished; buildings, schools, streets, institutions renamed; meaningful symbols and traditions stripped away. Our children are taught to think of themselves as hopeless bigots. The blue-collar, white working class has been economically devastated and utterly demoralized by the Covid-19 lockdowns. The Orwellian “we’re all in this together” propaganda mockingly flies in the face of the massive wealth transfer to the elites (Wall Street, Big Tech, Big Pharma), now feasting on the miseries of the folks out in flyover country, raining down their contempt on them for complaining about it.

Trump and his supporters have routinely been cast as Nazis; Donald, of course, as Hitler. (Google “Trump and Hitler.”) The establishment has a 21st-century program of “denazification” in mind for us, and they intend for nothing of our white European heritage to remain when they are done. Hate speech laws will silence us. The law will be selectively applied by the courts, making resistance to the pillaging revenge-agenda of BLM a criminal act. Floods from the needy Third World will pour in, furthering the goal of dispossession and immiseration. Our resistance to them will be further evidence for the denazifiers of our bigotry and a doubling down on the repression of freedom of association and expression will follow. Gun confiscation will complete the stripping away of our last remnants of independence.

So little time; so many to blame. I suggest that we focus on the Republican establishment: its treachery, cowardice, and venality.

Jim Goad said “only the jokes will get better.” Let’s look at the Republicans. There will be lots of jokes to come.