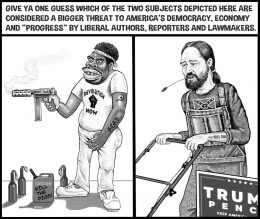 Kevin D. Williamson is a guy who tries to look tough [2] but in reality seems to be quite soft and fat [3].

I first became aware of his existence around 2016, when he verbally shat upon [4] the economically displaced poor whites who supported Donald Trump’s first presidential campaign. Shamelessly doing the bidding of his fart-sniffing masters at National Review, Williamson attacked poor rural whites with the sort of genocidal venom normally reserved for the likes of Tim Wise:

[N]obody did this to them. They failed themselves. . . . The truth about these dysfunctional, downscale communities is that they deserve to die. Economically, they are negative assets. Morally, they are indefensible. . . . The white American underclass is in thrall to a vicious, selfish culture whose main products are misery and used heroin needles.

As far as I can tell, Kevin D. Williamson’s “main products” are excess body fat and half-cocked screeds about why poor rural whites deserve to die. Perhaps it never occurred to him that our Brave New Global Economy could function quite well without either of Kevin’s “main products” and that people such as him are next up on the economic chopping block.

Many of you may recall that National Review fired John Derbyshire for daring to suggest that on average, blacks aren’t exactly MENSA material. But they reward writers who dismiss large swaths of rural white America as “Stone Cold Stupid.” In this regard, they are indistinguishable from the establishment Left that they claim to be fighting.

Despite the title, only a handful of Big White Ghetto’s 22 essays — all of them warmed-over pieces from the sclerotic National Review — deal with rural-white dysfunction. There are chapters about the oil industry, fracking, a Vegas porn convention, black ghettos in Chicago and Philly, the ever-expanding nationwide gambling industry, Bernie Bros, and Antifa nutjobs in Portland­ — and it’s never explained what any of this has to do with dumb, rage-filled whites in America’s hinterlands. It’s almost as if Williamson’s handlers wanted an excuse to kick out the hillbillies’ last remaining tooth, so they cobbled together some unrelated essays and gave it a provocative title hoping that no one would notice that at least three-quarters of the book has nothing to do with it.

He’s hardly fifty words into this book before he commits a major factual fuckup: He refers to eastern Kentucky as “the last redoubt of the Scots-Irish working class that picked up where African slave labor left off.”

The part he leaves out — whether through ignorance or malice — is the fact that those Scots-Irish hillbillies wound up in places such as eastern Kentucky because they were originally white slaves who’d been banished from the plantation economy after slaveowners realized it was more profitable to import African slaves, as well as easier to identify them should they attempt to make a break from the plantation.

To his credit, he notes that the violent crime rate in Owsley County, Kentucky — one of the poorest places in America — is lower than the national average, a fact that undermines the Leftist narrative that poverty is the main cause of violent crime. But since capitalism is as sacred to the National Review as the Holocaust, he flat-out denies that massive structural changes in the economy, engineered and implemented by global elites, are responsible to any degree for the plight of America’s pilled-out crackers who were too fucking dumb to pull up roots and move where the new jobs are.

You can buy Jim Goad’s The Redneck Manifesto here. [6]

As much as I strain to refrain from diagnosing other writers’ motivations, the most telling passages in the book for me are the handful of paragraphs where Williamson reveals he grew up in Lubbock, Texas. He was orphaned by his biological mother, a “girl in her early teens” whom he never met, only to be adopted by a woman who discarded husbands as if they were used tampons, one of whom was an alcoholic who physically abused Little Kevin.

And exactly like J.D. Vance, Williamson claims to be baffled as to why all these low-rent “pillbillies” don’t simply pull themselves up by the bootstraps and escape poverty just like he did.

I suspect the reason has something to do with the fact that there aren’t tens of millions of writing gigs available at National Review. That, and the fact that both their boots and their bootstraps are now being manufactured overseas.

The white underclass may suffer from “acting white,” but what poor people in general suffer from is acting poor — repeating the mistakes and habits that have left them (or their parents and grandparents, in many cases) in poverty or near-poverty to begin with. . . . When they were asked, they chose Donald Trump by a very large margin, but then the poor make poor choices all the time — that’s part of why they’re poor.

He acknowledges that “there are external forces, economic and otherwise” to explain why the life expectancy for white males is declining, but he spares us any elaboration regarding what those “external forces” might be. He is careful to distinguish the white “working class” — who love Jesus, love to work, don’t use profanity, and say “Yes, sir” and “Yes, ma’am” — from the white “underclass,” which is stuffed to its pink gills with fuckups and addicts and wiggers and, I’m presuming, the sort of stepfathers that Williamson claimed kicked him in the head when he was six.

He tut-tuts any mention of “globalists” or “elites” or even automation in explaining why there is a massive burgeoning class of apparently hopeless whites. For Williamson, even to suggest to members of this vanishing breed that their plight is in any way related to decisions made by the global managerial class is a comforting lie akin to hooking them on smack:

Feeding such people the lie that their problems are mainly external in origin — that they are the victims of scheming elites, immigrants, black welfare malingerers, superabundantly fecund Mexicans, capitalism with Chinese characteristics, Walmart, Wall Street, their neighbors — is the political equivalent of selling them heroin.

Viewed from another angle, it appears to be Williamson whose task is to comfort and psychologically shield the elite forces who’ve sold out their disadvantaged kinsmen in the name of endless profit and “racial tolerance” (i.e., cheap nonwhite labor) from any nagging guilt complexes related to the demonstrable fact that they are at least partially responsible for the emergence of a White Third World in rural America.

The last chapter, “Sinners in the Hands of an Indifferent God,” is for some reason tacked onto to this rambling mess of non-related essays in what appears to be an attempt to prove that Kevin D. Williamson can be every bit as inscrutably pretentious as a community college student taking a Creative Writing 101 class:

But there is work to be done, and champagne to be had (in moderation — we resolve to amend our ways), and even though everybody — everybody — knows that everybody — everybody — at every — every — New Year’s Eve party is only pretending to enjoy himself, we observe the proper offices and come together in our little pools of light in the brumal darkness.

What the FUCK are you talking about, peckerwood?

One can only hope that National Review will one day outsource Kevin D. Williamson’s job to some Pajeet in Bombay who truly understands the “real America” far better than some racial turncoat who is lasciviously eager to squat down and defecate on his roots in exchange for 30 pieces of silver.