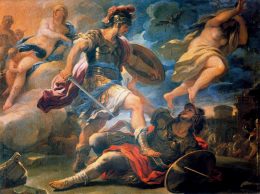 For most of my life, I have never really felt patriotic about America or being an American. The only time I felt a strong connection to America was during Donald Trump’s presidential campaign of 2016. I would drive hundreds of miles just to attend his campaign rallies and meet other Trump supporters. As the fallout of the Capitol occupation has led to increased censorship and arrests, I thought about the Trump supporters I met five years ago. These events have also reminded me of Virgil’s Aeneid. Just as Virgil helped shape a new mythos and identity for the Roman people, the Dissident Right can also help Trump supporters forge a new path for their land, their sovereignty, and their identity.

Although both of my parents were patriotic Americans, I always wished that I were born in Europe. Having discovered heavy metal at a young age, I always dreamed of moving to Europe and seeing all my favorite bands at metal festivals. After several years of attending public schools in the US, I became aware of all the anti-white propaganda that was being pushed in my classes. This led to a lot of heated arguments with my parents where I would tell them that I hated America and wanted to move to Europe. At least listening to Norwegian black metal and playing computer role-playing games made me feel like I was in Europe.

My parents were aware of the increasing anti-white propaganda in American society and even noticed these issues in their own lives and careers. Nevertheless, my parents always believed that the American values of liberty, freedom, and democracy would overcome any cultural, political, or demographic problems. I was not as optimistic. That is one of the reasons why I relocated to Scandinavia and Germany for most of my 20s. After my visa expired, I had to return to the US. Fortunately, I returned just in time to see the beginning of Trump’s presidential campaign.

I had never been interested in politics or supported an American politician until Trump ran for president in 2016. Trump was the first politician in my lifetime to speak about some of the issues that impacted white people in America. From Muslim bans to building a wall, I finally found a presidential candidate that had the guts to say what most white Americans were thinking and feeling. Supporting Trump was a big middle finger to all the schools, media companies, and government institutions that shamed and vilified white people my entire life.

By the beginning of 2016, I was calling in sick from work to drive hundreds of miles to attend Trump’s campaign rallies. The feeling of being surrounded by fellow Trump supporters in a packed auditorium was both exhilarating and inspiring. Going to these rallies made it feel like I was attending a heavy metal concert as a kid for the first time. It was easy to strike up conversations with fellow Trump supporters and I was also able to meet other nationalists that followed the same YouTube channels that I watched. There were always risks at these rallies of being confronted and attacked by Antifa and BLM, but these risks made it that much more exciting. This excitement would help get Trump elected in 2016. Despite the constant letdowns and disappointments of the last four years, thousands of Trump supporters from around the country had enough bravery and courage to show up in Washington DC to support their president on January 6, 2021.

Trump called for thousands of his supporters to “stop the steal” by gathering in DC to protest the voter fraud of the 2020 presidential election. This rally eventually led to the storming of the United States Capitol. As protestors wandered inside the Capitol Building, Ashli Babbitt was shot and killed. Along with Babbitt, three other Trump supporters died due to medical issues that occurred at the event. The fallout of the event is still being felt with ongoing censorship, doxing, and arrests. Trump had his Twitter account suspended. Over 30 protestors have been doxed, arrested, and charged with federal crimes. Nick Fuentes and several related content creators had their DLive channels deleted. The social media site Parler had its app removed from all the major smartphone app stores. Along with being vilified by the mainstream news outlets, the protesters were even denounced by Trump. For me, this was the straw that broke the camel’s back.

Over the last four years, Trump supporters have risked their livelihoods, careers, families, and physical safety. Many have lost their jobs, their families, and their social media accounts. Whether Trump had the power to protect his supporters is debatable. But it is unforgivable and inexcusable for him to condemn and abandon the supporters that answered his call and attended this rally. I was not at the storming of the Capitol, but I met similar people at the campaign rallies of 2016. They are patriotic Americans, and they deserve a leader that will stand up for them. If nothing else, Trump should pardon every single person that has been arrested for attending the protests on January 6.

How many Antifa and BLM rioters were arrested after burning our cities and destroying our monuments in 2020? How can the FBI locate and arrest so many Trump supporters within a few hours when thousands of looters and criminals during the George Floyd protests are still walking free after several months? During those riots, I saw numerous videos of Antifa and BLM attacking innocent bystanders with no repercussions. Before writing this article, I saw several videos of Trump supporters being arrested and detained at various airports for attending the Capitol occupation. This is political intimidation, harassment, and persecution.

This is why I have always struggled to feel patriotic towards America. America has become an oligarchical empire that has turned against conservative white people. Despite paying the taxes and doing the jobs that keep America running, white Americans are shamed, vilified, and persecuted. For the last several years, the US government has been working with both political parties and various corporations to import immigrants for our democratic and demographic displacement. Perhaps it is time for white Americans to form a new identity and mythos. In many ways, the Roman poet Virgil did these things for the Roman Empire and the Roman people.

The Aeneid is an epic poem written by Virgil between 29 and 19 BC. The poem follows Aeneas as he leads his fellow surviving Trojans to a new land where they become the ancestors of the Roman people. The first half of the poem depicts the adventures of Aeneas through the Mediterranean (and the mythical underworld) to his arrival in Latium (Rome). The second half of the poem follows the battles of Aeneas and his trojans against the Latin tribes. The Aeneid portrays Aeneas as a strong leader who is dedicated to securing the survival of the Trojan people. Even when falling in love with Queen Dido of Carthage, Aeneas abandons his own desires for the fate and survival of his people.

Virgil wrote the Aeneid during a time of social and political instability. After the last war of the Roman Republic (32-30 BC), the future of Rome seemed uncertain. Emperor Augustus attempted to implement a new era of peace and prosperity by promoting Roman identity, culture, and values. For Augustus, the Aeneid exemplified these ideals. Just like Augustus, Aeneas was depicted as a strong leader devoted to his country and his people. During the 2016 presidential campaign, Trump appeared to be a strong leader that would stick up for white Americans and make America great again. Unfortunately, Trump was not the hero that would recapture our glory or lead us to a new land of opportunity.

Many white Americans like me feel betrayed by Trump and abandoned by America. Being a white American today feels like being a Soviet citizen in 1990 or a Yugoslav citizen in 1991. When those declining empires fell, the people of those empires turned to their ethnic and racial identities. Although America may not collapse tomorrow, all empires eventually fall over time. Regardless, the ancestors of white Americans were some of the best explorers, settlers, and pioneers of Europe. The creativity of Virgil survives in their thoughts. The bravery of Aeneas survives in their souls. Whatever the future holds, I hope that white people in America can forge a new path of ethnic sovereignty and white solidarity. Whether that makes us the founders of New Denmark, New Karelia, or New Latium, my loyalty will always be to my people.

The true heroes of today are the Trump supporters that risked everything to support their candidate and their country. The real leaders are the brave individuals that gathered in DC to speak out against political corruption and election fraud. Rome may have been founded by Aeneas and his fellow Trojans, but the capital of my country was founded on January 6 by Roseanne Boyland, Kevin Greeson, Benjamin Phillips, and Ashli Babbitt. They risked everything to stand up for their people and their country. I call on President Trump to honor these brave heroes and pardon all the Trump supporters that have been arrested for attending the Capitol occupation.

That is something I could feel patriotic about.