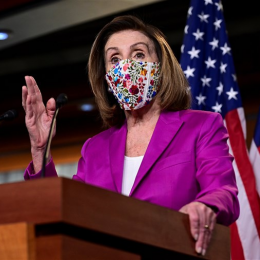 After the mostly peaceful pro-Trump protests on January 6, 2021, domestic politics moved further along the road to instability and blood in the United States. When and if the United States gets through this rough patch, future generations will look back and compare Nancy Pelosi to John C. Calhoun. Calhoun was a stubborn leader who used his consolidated power to support a narrow interest group of slaveholders. He ultimately cut away any chance for the Americans to compromise themselves out of the Civil War.

The nature of this protest aside, none of this is unprecedented, not even the deplatforming. A mob of Democrats stormed the Wisconsin State Capital in 2011 and stopped ongoing legislative efforts. There was also a mob that occupied part of the US Capital in 2018 during Justice Kavanaugh’s confirmation hearings. This is also comparable to the thousands of sit-ins during the Vietnam War.

Limiting free speech by establishment elders is not unprecedented either. Between 1836 and 1844, Congress had a “gag rule” on discussions of slavery, thereby making the pending Civil War more likely. At the same time, Southern postmasters didn’t distribute abolitionist literature through the mail.

Michael Lind argues that five intersecting crises [2] led to the Capitol Hill sit-in. I’ll add my own ideas, some of which intersect with Lind’s. For one, the “civil rights” paradigm is a socio-political order that is unstable and it is breaking down. Second, the 1964 Civil Rights Act is an illicit second constitution that is increasingly at odds with the core American population. Finally, the “respectable” political elite is female-led and hysterical at a time when the Establishment needs mellow men to keep things even.

There could be a connection to the natural human lifespan with the Fourth Turning — Pelosi was 24 when the ’64 Act was passed. The events a person experiences in their twenties shape people in such a way it becomes difficult to absorb new realities.

In other words, the “civil rights” consensus is breaking down. When I was a kid in the 1980s, it was nearly impossible to find a movement of pro-white anything. There were skinheads of course, but they were marginal, a sort of zoo animal that was paraded on daytime talk shows. By and large, there was no criticism of black behavior in an overt sense. Pro-white forces started to gather in the 1990s. The idea for American Renaissance was founded at a small, invitation-only conference during that decade. Since that time, pro-white ideas have grown. Pro-white activists are no longer skinheads or marginal figures.

The 1964 Civil Rights Act is also an illicit second constitution. Besides giving non-white terrorists what amounts to extralegal protections, the act empowers black rioters and forces people to lie about basic scientific truths (like the “trans” movement). The ’64 Act invalidates every American action prior to its passage. With this illicit second constitution, George Washington will eventually become a “terrorist” whose statue needs to be removed.

Finally, the political establishment, especially the Democratic Party, has been led by women and they’ve done very badly navigating the Trump Era. Donald Trump came to power based on three ideas:

All of this is objectively true and responding to it was not unreasonable. Regarding immigration, Alien Nation was published in 1995, The Clash of Civilizations was published in 1996, and manufacturing collapsed throughout the Bush (43) presidency. American foreign policy in Iraq, during the Arab Spring, and in Syria has been an unmitigated disaster. All of these issues were known and unaddressed except by Trump. Hillary Clinton, the Left’s first champion during the Trump years, seemed to want to expand these disastrous policies while provoking further conflicts with Russia.

After Hillary went down to defeat, the most powerful Democrat became Nancy Pelosi. She could have come up with an alternative strategy to Trump’s that addressed the nation’s problems and compromised in some way. Consider Newt Gingrich — a bitter opponent of President Clinton — and his “Contract with America.” The political conflict between the parties in the 1990s was channeled into economic matters. In the end, Gingrich compromised on Medicare and Clinton compromised on everything else. The American economy boomed and a thirty-year Sub-Saharan crime wave ended.

In contrast to Gingrich, Pelosi chose two disastrous ways to oppose Trump. The first was to fabricate a conspiracy theory that “the Russians” had “hacked” the 2016 election. The media uncritically repeated this lie, and the FBI and a special prosecutor were dispatched. Pelosi “sowed the wind” with the Russian hacking hoax. When the 2020 election counting turned out to be unusual, it was too easy for a great many Americans to suspect hacking by Democrats in large cities and nothing the mainstream press could say changed minds. On Wednesday, January 6, 2021, Congress “reaped the whirlwind.”

When the special prosecutor turned up nothing, Pelosi made a second disastrous decision. She impeached Trump over a disagreement in foreign policy. This plan was very poorly thought through — the American public has no passionate interest in Ukraine and the impeachment smeared Joe Biden with the label of “crook.” The most important long-term problem stemming from this act is the criminalization of policy differences. This political behavior caused the end of the late Roman Republic and has led to civil wars and bloodshed in other nations.

Pelosi has doubled down on her folly by turning a sit-in at the capital into an “insurrection.” Meanwhile, no Trump voter has changed their mind. She has potentially made 75 million Americans “rebels” and “terrorists.” Consider, when Antifa are shot by a guy like Kyle Rittenhouse, the slain were men with long criminal records. When the police shoot a Trump protestor, they kill a veteran with multiple overseas tours who runs a respectable business. This won’t end well.

These actions can only be explained by feminine hysteria. Women don’t really learn hard leadership lessons when they are young. They didn’t get punched in the face in junior high school and seem to have a limited understanding of the red lines of others.

Joe Biden is said to be a compromiser and a moderate man. Should he wish to stabilize America, he should ask for her resignation. Pelosi is hysterical, unwise, and lacking vision.

She is the worst Speaker of the House ever.