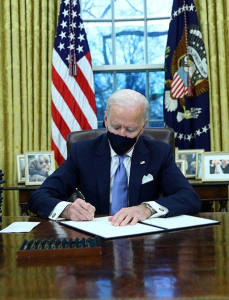 If you’re anything like me, you watched with frustration as Joe Biden stumbled through his inaugural speech and then proceeded to do away with many of Donald Trump’s great executive orders. In the meantime, QAnon’s prophecies did not manifest. Jesus didn’t return to save the Chosen People of America from this cognitively declining anti-Christ.

What is a white advocate and patriot to do? Don’t despair; there are plenty of great things going on. Mainstream media love Biden, but Biden’s obvious growing senility cannot be papered over forever. Biden’s shambling gait and vacant and confused looks will be front-and-center every day of Biden’s presidency be it long or short.

Biden’s presidency might already be crippled. Despite nonstop media propaganda about “baseless” claims of election fraud, it is clear that much of the public still suspects a steal. Indeed, more people turned out to protest at the Capitol on January 6 than went to the inauguration. Biden held a “virtual” parade because it is highly likely that more Trump supporters would have shown up than his own. Biden needed thousands of troops to protect his inauguration, and he didn’t trust them [2].

The inauguration was a sign of instability and weakness. Lincoln, for all his polarizing faults, at least had passionate supporters at his swearing-in.

There is another thing I wish to point out. Although the Judeo-establishment and mainstream media think that Biden is a return to normal after the Trump Interregnum, things won’t return to the way they were. A historical parallel to this situation is that of French Indochina in 1945. Although the French returned after the Japanese occupation, the region had changed so much that French rule was effectively over.

Biden has also signed several executive orders [3] that are as shortsighted and foolish as the neoconservatives’ De-Baathification policy.

With the stroke of a pen, Biden has destroyed an ongoing project [4] worth $8 billion. This has put a great many people out of work, from janitors to steelworkers to engineers to investors. There is now a large, angry group of people with nothing to do. Furthermore, the project has nothing to do with “climate change.” It is more a give-away to oil-producing nations like Saudi Arabia. The Saudis don’t want an energy-independent North America.

The “Muslim ban” didn’t come from nowhere. By 2016, thousands of Americans and Europeans had been killed in terror attacks. Truck ramming attacks, mass shootings, and real-life snuff films were coming out of Syria and Libya constantly during Obama’s second term. With the “Muslim ban” reversed, these events could return.

Trump’s immigration executive orders also didn’t rise from the sea like Venus on a clam-shell. Immigration is universally known to be a problem. If the African Question is the queen of all social problems, immigration is the king. Any disorder on the border will be bad for Biden. The media might not be able to ignore the crisis, either. When one media outlet goes anti-white, another outlet will spring up to take its place and that info makes it to the House and Senate.

The immigration enforcement rules are more important than the wall, but the wall has an important economic impact. American steelmakers were building components, American truckers were transporting those components, and American builders were putting them all together. They’re all out of work now, and lenders won’t get paid back, support jobs will vanish, et cetera. The next big illegal immigrant crime or Muslim terror act will be a bloody shirt that can be used by even the most cowardly Republican cuck against Senile Joe.

Officially, this pledge has something to do with the “independence” of the Justice Department, and it is a significant development. It is an indicator that the social environment supporting the illicit second constitution [7] of the 1964 Civil Rights Act is falling apart.

Unstable social arrangements, like the Civil Rights Act and the 1965 Voting and Immigration Acts, tend to have a four-score and seven-year lifespan, and the cracks show up long before the final collapse. We’re seeing one such crack now.

Don’t sit on the couch for the next (possibly) four years and weep. But before taking action, follow these principles first: Don’t do anything illegal, be truthful, and have your facts straight. Then decide how much you wish to be involved. Most people still need to raise their families and get ahead in their careers. Having money and status always helps.

It must also be said that yes, what the mainstream media preach and what Leftist politicians say is true: This is about race and “anti-Semitism.” America is effectively occupied with Jews at the top, and these Jews are governing things poorly. Many MSM companies are owned by Jews. Leftist terror groups are funded by Jews, and Trump’s first impeachment was carried out by Jews over a dispute over policies that Jews favored.

If Trumpism continues on to victory over the years, the place of the organized Jewish community in American society will no longer be privileged. Our advisories know this and are acting accordingly. Don’t think that our enemies will go down without a hard fight.

If you wish to get involved politically, either party will probably do, but the Republican Party must support white interests in the future. The Capitol Selfie-Fest of 2021 united the Right. There were politicians, bankers, podcasters, businessmen, veterans, and at least one Olympic gold medalist there. All of them had to be somewhat aware of pro-white messages beforehand, and if they weren’t, they’ve been declared and effectively are white advocates now.

For those facing legal challenges due to the event, don’t despair or commit suicide. Go on defense. Millions support you. You might get sympathetic jurors.

For those wishing to get involved in politics, the first thing to do is support your local Republican (or reasonable Democratic) official. Go and stuff envelopes, beat the bricks, answer phone calls, or whatever. Then, local officials need to focus on ending election fraud at the state level. The true story of 2020’s election fraud will come out. JFK, a hero to the MSM and liberals of the day, was protected by the press, but rumored to be sexually reckless, have major health issues, a family involved in serious corruption, and an election victory due to voter fraud in Chicago. All of those rumors were proven true, although Kennedy’s supporters shouted that they were not for as long as they could get away with it. JFK even had a tryst during the Cuban Missile Crisis. Had he not been slain, his legacy would not be positive.

We can also put pressure on America’s so-called “allies” to advance an America First agenda. South Korea, Israel, Saudi Arabia, and Azerbaijan top the list of allies that are more trouble than they are worth. If one is in the State Department or military and dealing with those people, be as legally unhelpful to them as possible. Don’t give them info, make them work hard for everything, don’t invite them to your social functions, and don’t attend their social functions. If you aren’t in such a job, one can protest the cost of joint training exercises, such as those in Korea. Let Congress hear your voice.

Finally, don’t be an asshole. After watching a BLM protest [8] from a distance, I was surprised by how poorly behaved the counter-protestors were. Trumpist and pro-white activists should do as much as possible to be the respectable, model citizen. Every non-mattoid white currently status signaling with BLM will change their mind eventually. Ronald Reagan was a vicious anti-Communist with a smile and that helped demoralize his anti-anti-Communist enemies. We need vicious pro-whites with a smile too.