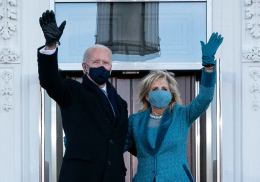 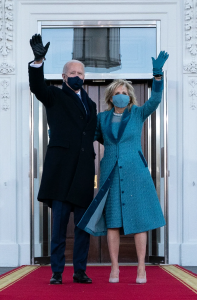 Il buono, il brutto, il cattivo — The Good, the Bad, and the Ugly — is the title of the 1966 Italian epic Spaghetti Western film directed by Sergio Leone that starred Clint Eastwood as “the Good,” Lee Van Cleef as “the Bad,” and Eli Wallach as “the Ugly.” With Eastwood as the star, it was a fun movie to watch. Lots of macho action.

Fast forward to the January 20, 2021 Presidential Inaugural Address, a remake of the original with little action and no macho.

Of course, this production was much different from the Italian version: inferior direction, trite, hackneyed script, and a geriatric set of “stars” whose performance made a comedy out of what was intended to be a solemn ceremony. It was painful, certainly not fun to watch. But, like the 1966 movie, “the good,” “the bad,” and “the ugly” each made an appearance, though probably not as intended by the producers of this farce.

Let’s start with “the good.” It’s the easiest because, unlike Clint Eastwood in the original, it had a minor role. I’m talking about the masks. They were “the good.” Seeing our esteemed members of the ruling class clumped together on the podium with their faces covered with masks was the most enjoyable part of the whole event. Why? Because you didn’t have to look at their faces. Because maybe they weren’t even there: maybe they were using their body-doubles.

Hey, no sense in taking chances with this Covid-19 stuff, just to watch some stiff go through the drill. Who knows? In any case, I’ve seen the mugs of Obama, Bill, and Hillary enough to last a couple of lifetimes, especially Hillary’s. Plus, there was some mild entertainment afforded by trying to figure out who was who. Is that Hillary or is it Dr. Jill? Which one is Nancy? The hair — that’s got to be Bill. Not that it made any difference, but it helped to cope with the boredom.

Then there’s the irony at work with the mask-wearing, irony that cuts in two different directions. One of the main purposes of masks that differs from their alleged prophylactic value is to make people wearing them harder to identify when they are committing crimes. Seeing the members of this much-vaunted ruling class up close, huddled together and all masked-up — it’s hard not to view them as more than what they are: a criminal class. It seemed to be so very fitting to see them in disguise.

Speaking of “huddled together,” you couldn’t help but recoil from the hypocrisy. When we, “the ruled over,” venture out, we’re constantly tut-tutted to “social distance” — you know, six feet apart because it’s so very important. You might think that because social distancing is so crucial for defeating the progress of Covid-19, and because the DC gang is so important in leading the way, that these folks would be sitting apart. You would be forgetting that the rules they make for us don’t apply to themselves. Adding insult to injury is the arrogance: they either think we are too stupid to notice or they don’t care. Probably both.

The other irony at work in the mask-wearing is “the virtue flip.” Bad guys used to wear masks; now it’s the good guys who don them. So, this was a grand opportunity for the masked-up boys, girls, and converts on the stage to collectively strut their superior virtue. “See how it’s done: be virtuous just like us.” Whatever the prophylactic service the masks might offer, the mask is first and foremost a visible badge of belief in the terror of the plague and the wisdom of the ruling class in defeating it. That’s why the moral opprobrium rains own on the refuseniks. Not wearing a mask marks a non-believer, a heretic, a “deplorable,” perhaps, who must be shunned, even punished. Authoritarian rulers must have their heretics to legitimize the repression they inevitably bring down.

On to “the bad.” Looking at the setting for Inauguration 2021, you might for a moment pinch yourself thinking you were watching some generals, post-coup, installing the chosen “strongman” in Bogota, Quito, Tegucigalpa, or in some other banana republic. You were not. This was taking place in the hallowed ground of “democracy” in Washington DC. An installation was underway, however, not of a strongman, but a cognitively compromised puppet reading his lines prepared by a gang of cynical scriptwriters, no doubt yucking it up as they churned out the “all for one; one for all” platitudes. Did President Biden believe in the words he was reading off the teleprompter? Given the low horsepower moving his thought processes these days, I’m tempted to think that he did. But whether he did not, the content of the speech was so far removed from the reality of the physical surroundings and the circumstances of the election and its aftermath that it could only be regarded as a pathetic curiosity.

Yes, a bit more on the physical surroundings. The ruling class was protected by twelve-foot fencing topped with concertina wire; thousands of military personal, heavily armed — vetted for political reliability — were standing around to protect them. Twenty-five thousand men, more than the combined troops in Afghanistan and Iraq. To do what? Protect the ruling class from its own people. “Fear” is the word that captures the ambiance of the event. You don’t have to be a deep thinker or a social psychologist to figure out that what you were looking at was a bunch of political bosses who are afraid of the people they rule over, pretend to care about, and thoroughly despise. This was, as another observer noted, a “Potemkin inauguration.”

Finally, “the ugly.” Here is where I take the risk of elder abuse. Giving this speech was a very old man who looked and sounded like, well, a very old man. Even some of the Democrats must have wondered to themselves: “Jesus, how were we able to pull it off with someone so devoid of energy and substance, someone who looks and acts like he should be enjoying himself in a retirement village?” As he moved around the platform before and after the speech, he looked fragile and unsteady. Oddly, from behind, with the bald spots and the limp, stringy hair hanging off the back of his neck, he seemed to look especially elderly.

No doubt, he makes his handlers very nervous. Kamala Harris, sitting behind him, must have begun crossing off those dates on her 100-day calendar. She is already making remodeling plans for the White House, compiling her enemies list. Under her breath, she says: “He’s not going to last long.”

That was it, and it was one lousy movie. Not recommended for children.