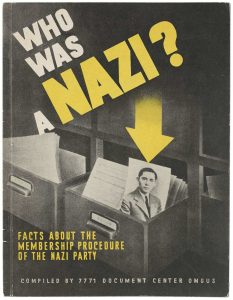 The mainstream media’s Pravda-like flogging of protestors who invaded the Capitol on January 6 suggests it might be useful looking to the past for a historical parallel to help us understand what happened on that day, what is unfolding now, and what we might expect over the next few months.

We are now in a propaganda deluge, unprecedented in America’s history of transitions of Presidential power in its venom and vindictiveness. Encouraged by the elites in both parties, it is laying the foundation for massive repression — perhaps approaching a pogrom — for the supporters of Donald Trump. Worth noting is Washington Post columnist Jennifer Rubin’s [2] comments on MSNBC:

[T]he only way to purge the GOP of Donald Trump supporters is to burn down the Republican Party with no survivors. What we should be doing is shunning these people. Shunning, shaming these people is a statement of moral indignation that these people are not fit for polite society.

So: speaking of “burning down the Republican Party,” the burning of the Reichstag in March 1933 and the ensuing “Enabling Act” Ermächtigungsgesetz that gave Chancellor Adolf Hitler plenary powers is a tempting choice of historical parallel.

The media are painting the January 6 Capitol protest as a riotous insurrection by followers of an illegitimate ruler seeking to nullify the recent election and re-install him. With the executive and legislative branches of the government under Democrat control and a compliant Judiciary, it is reasonable to expect a series of “enabling” executive orders and Congressional enactments that strip away basic constitutional rights and freedoms — speech, assembly, fair trial — from a large body of Americans who are now vicious, white bigots. Terrorist status is on the agenda. House Speaker Nancy Pelosi nicely summed it up [3]: “There are people in our country, led by this president, for the moment, who have chosen their whiteness over democracy. That’s what this is about.” What she “is about” is the disenfranchisement and ultimately dispossession of white Americans. The captains of the tech industry, Zuck, Jack, and Sundar, will finish strangling the First Amendment for social media users. That, combined with the control of the mass media by the Democrats, will “enable” them to rule with virtually no voiced opposition. 2021 is on the precipice of one-party rule: thus, the historical parallel with Germany, March 1933.

The Reichstag burning parallel, however, is imperfect in multiple ways. Unlike the Democrats, the NSDAP 1933 did not have a majority in the German legislature (the Reichstag) and, unlike the Democrats, the National Socialists had no history of governing Germany. The Democrats have the undeserved advantage of (at least some) voters who trust that they will govern within the boundaries of the constitution. This makes the lure of a party dictatorship for them even more alluring and easier for them to initiate.

But the most obvious and perhaps the most disturbing difference between Germany 1933 and the US 2021 is that the group targeted for repression in Germany, the Jews, were a small minority. Whites in the US are still the majority.

How can this be happening? How can a majority population in a country with a long history of constitutionally governed stability be so docile and complacent as to surrender their rights, freedoms, and worst of all, the future of their children to people who hate them? Once in complete power, they will complete the despoiling of their cultural heritage, reduce them to peonage, and, at some point, attempt to dispose of them.

You can buy Greg Johnson’s Here’s the Thing here. [5]

The answer to these questions comes with a different historical parallel, one that comes closer to current events and likely better predicts what lies ahead.

Back to Germany, but fast-forward from 1933 to 1945. Under Allied occupation, the German people live under the denazification — Entnazifizierung — program for the next six years. Germany in 1945 was not just a militarily defeated nation. It was occupied and physically destroyed. Its entire population was at the mercy of its occupiers and judged to be infected with the Nazi ideology of racial hatred and the legacy of Prussian authoritarianism and militarism. Denazification conducted by the victorious occupiers was to be a forced transformation of the German national psyche: through re-education, the German people would come to embrace democracy and racial equality. They would become a nation of anti-Fascists, “Antifa” for short.

Looking at Germany today, one can affirm with absolute certainty that denazification was a smashing success. No real Nazis of any consequence could be found anywhere in that country. And for good reason. Try calling yourself a Nazi in today’s Germany and see what happens to you.

Whether denazification was a good thing for the German people, however, is a matter of debate. Which side you come down on depends on your level of enthusiasm for unrelieved guilt and unending self-flagellation. While much of the world, I would surmise, has forgiven Germany for its Nazi-era “sins”, the Germans themselves seem fanatically determined to despise themselves for being Germans. The German people are collectively Bill Murray in Groundhog Day. Every day they wake up is the same day in 1946, over and over, and they do the same thing. The same thing is The Purge — of people, symbols, customs, language — the purge of all things that might suggest that Germans are still infected with the Nazi virus.

Though never formally proclaimed, American-style denazification has been underway for some time. The official name for it is “the elimination of systemic racism.” The 2020 presidential election and the aftermath leading up to the January 6 protest portends its next, shall we say, more vigorous stage. At the beginning of his quest for the Presidency, Donald Trump was christened as another “Adolf Hitler.” (Google the terms “Trump” and “Hitler” and plan on eternity to look at them all.) Seventy years after Hitler the First blew his brains out with his Luger in the Fuhrer Bunker, Hitler the Second burst on the American political stage with the support of the lumpenproletariat. Hillary Clinton, late in her failed campaign, described them as “irredeemables.” “Untermenschen” if she were talking to a German audience on Groundhog Day.

The country has groaned under the tyranny of Hitler the Second for the last four years — all those “undesirables” he rounded up and threw into concentration camps, the invasion of Mexico, the elimination of political rivals.

Well, he didn’t actually have time to get around to all of that. But you can bet he was going to!

Now out of power, expect a full-blown program of denazification to be unleashed. The deplorables and irredeemables must be punished. Think of the impeachment proceedings planned by the Congressional Democrats as a kind of Nuremberg Trial, a rite of condemnation for the deposed Chief Nazi. For his followers, expect persecutions of various sorts: loss of employment and/or promotion opportunities; social ostracism; purging from positions of influence and authority, struggle sessions with confessions of innate bigotry and racism with tearful apologies.

Here we arrive at the perfect parallelism: denazification, the German original and its American farce. Like the German people whose collective psyche had to be purged of its Nazi sins, white America’s collective sin of “racism” must be addressed and white America also must be purged. This has been in progress for a long time and explains the complacency of so many white Americans and their willingness to engage in the prescribed rituals of self-flagellation.

The Germans bowed to their guilt, and Germany as a rich, distinctive culture is quickly dissolving into a multicultural mass, indistinguishable from people elsewhere on the planet. The compliance of white America to denazification, similarly, is driven by a systematic plan of engineered guilt to remake America into a multicultural society that scorns its white-European heritage.

White, eight-year-old Johnny asks his white mommy: “Why are white people so hateful of black and brown people? That’s what the teacher told us today.” Mommy: “Well, I think Oprah can help explain it to us.”

Foreign military occupiers were the initiators of German denazification. American educators are the agents of the American version. American universities and schools are where the guilt “engineering” has been going on, right under our entertainment-distracted noses.

One can perhaps hope that the havoc wrought by COVID-19 might bring about the eventual collapse of America’s existing educational system. Therein would lie the beginning of resistance to American denazification and an escape from the fate of Germany.