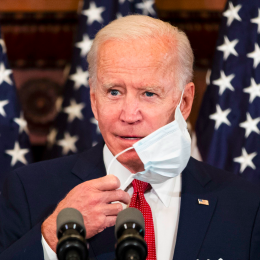 Joe Biden has only been president for a little over a week, but the system is already emboldened to bare its ugly face. It now persecutes political enemies for memes, imposes a permanent military occupation in the capital, shuts off the markets to populist forces, and replaces popular symbols of the historic American nation with hideous images of multicultural America.

Only the blind can’t see the system for what it is now. Liberal elites feel comfortable revealing their true selves to the public — will this finally lead the public to wake up?

The first sign of the system baring itself was the military occupation of Washington D.C. The most popular president in United States history was inaugurated under the watch of 26,000 troops and no ordinary civilians. Soldiers locked down the city, blocked off streets, and wandered around like their nation’s capital was Baghdad’s Green Zone. Some lawmakers even proposed crew-manned machine guns be placed on the Capitol — all because of hysteria surrounding January 6. Thousands of troops are staying in DC for the foreseeable future and authorities plan to erect a permanent fence [2] around the Capitol. The sacred temple of democracy apparently needs to tell the people they’re not welcome.

DC’s liberal residents greeted their military occupiers as liberators from the MAGA menace. They provided free food, hugs, and much adoration to the slovenly National Guardsmen who patrolled the deserted streets. Not one threat was encountered during inauguration week, but it didn’t matter. It was about sending a message to Middle America: “We have the military on our side; you don’t.”

The authorities plan to keep us in a continual heightened state of alert. The Department of Homeland Security issued a suspicious bulletin warning [3] of an increased “threat level” for the next couple months. It warned that “ideologically-motivated violent extremists with objections to the exercise of governmental authority and the presidential transition, as well as other perceived grievances fueled by false narratives, could continue to mobilize to incite or commit violence.” Thus, we need to keep on our lookout for “domestic terrorists” who object to our 100% free and fair government. The point is to inflame mass hysteria and befuddle people into thinking Right-wingers are the biggest threat to the country. We must always remember the enemy in our midst.

The military itself plans to purge the enemy [4] within its ranks. The new defense secretary, Lloyd Austin, pledged to rid the armed forces of “racists and extremists,” saying we can’t fight when “those enemies lie within our own ranks.” The message is drilled home again: “We have the military on our side; you don’t.”

The system also wants to make sure you don’t see great Americans on their money anymore. The Biden administration announced it would accelerate the process to get alleged Underground Railroad conductor Harriet Tubman on the twenty-dollar bill. She would replace Andrew Jackson. “It’s important that our notes, our money . . . reflect the history and diversity of our country and Harriet Tubman’s image gracing the new $20 note would certainly reflect that,” said White House press secretary Jen Psaki [5].

Tubman is a more suitable figure for the regime. She’s a strong black woman who stuck it to evil white racists. Her legend says she freed hundreds of slaves and even led military raids on the Confederates. Meanwhile, Jackson owned slaves and removed Indians from their lands. Why would we keep a white racist on the twenty when we could have a badass black woman? That’s the question the sleepwalkers among us may ask as they proudly celebrate a grim-faced black on their favorite dollar bill.

Tubman’s legend is mostly exaggeration [6]. She did not command a military raid and she at most freed 70 slaves, nearly all of whom were relatives. The only sources for her life are her own testimony, which may have been impacted by a severe mental condition that resembled some form of narcolepsy. Whether her story is true or not doesn’t matter. Millions of school kids learn the legend and refuse to disbelieve it. It also reaffirms the liberal delusions that individual blacks contributed significantly to the development of America. In the eyes of the brainwashed masses, Tubman is more important than Jackson. Random blacks matter more than great whites.

You can buy Greg Johnson’s Here’s the Thing here. [8]

While the Treasury Department planned to change our money, a populist revolt sought to take back the people’s money from corrupt hedge funds. The GameStop Reddit revolt shook Wall Street with the simple technique of retail investors banding together to take on the big dogs — and they nearly won. But then the system brought down the hammer. Discord banned r/wallstreetbets, an organizing force behind the revolt, for “hate speech.” Nearly every trading platform barred users from buying stocks targeted by the revolt. Wall Street and politicians demanded criminal investigations into the trading and promised severe consequences for the peasants. One of those demanding punishment of the peasants is alleged populist Elizabeth Warren [9], who demanded regulators to zealously pursue the GameStop traders.

The Reddit-driven stock trades were a hit with the masses, however. Various celebrities and political commentators lent their support to the populist surge. It may be nothing more than a harmless prank and not a serious threat to the system. But the system is treating it as such and is changing the rules to make sure it doesn’t happen again. Many traders want stock talk banned from social media — only they can discuss it among themselves.

The system encourages people to invest in the stock market, but on its terms. It doesn’t want the people to manipulate the markets; that’s the job of the hedge funds. Even though the vast majority of Americans were on the side of the Redditors, the system sided with the hedge funds. Elites may boast of free markets, but they’re only free to those with access and power. The little guy just needs to take the scaps he’s given.

The next indignity imposed on us by this system was the arrest of Ricky Vaughn [10]. Readers may remember Vaughn for his great work during the 2016 election that made him one of the most influential posters on Twitter. The FBI arrested him this week for his memes — literally. Vaughn — real name Douglass Mackey — stands accused of election interference for memes that jokingly advised Hillary Clinton supporters to vote by text. Those who texted the number would receive a message that they had not voted. It was certainly not election interference. Unfortunately, the federal government can decide what is and is not election interference. So they can persecute political enemies for memes. Mackey faces up to 10 years in jail if he’s convicted. Even if he wins this case, his life is irreparably damaged by it.

One is not allowed to question the legitimacy of the 2020 election on YouTube, but you can make skepticism of the 2016 election into the basis of a federal criminal investigation. Vaughn’s prosecution is just the beginning of the feds criminalizing dissent. You already can’t have access to social media as a Dissident Right-winger — now you may not have access to the world outside your jail cell.

At the same time the federal government arrested a dissident for memes, they let off one of their own with a slap on the wrist. Former FBI lawyer Kevin Clinesmith avoided jail time [11] this week in receiving a generous one-year probation for falsifying information that inspired the Russia hoax. Clinesmith passed along false information to a FISA court to authorize surveillance of Trump adviser Carter Page. That probe destroyed Page’s life, nearly upended an elected president, and inspired a mass wave of Russian hysteria. But the court decided Clinesmith didn’t deserve prison, unlike the many Capitol protesters who can’t even make bail.

Only the delusional can’t recognize the corrupt system we live under. The Biden administration wants to ramp up dispossession as quickly as possible. We must dispense with any illusions about the country we live in. The American regime sees us as its enemies and no longer has to bother with democratic pretenses.