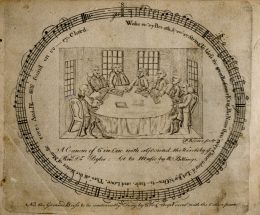 The Yankee tunesmiths were a group of composers active in New England in the late 18th century. Most of them were self-taught and made a living as craftsmen or farmers. Many also fought in the Revolutionary War. Their music draws on their British heritage, namely the tradition of English psalmody, but it is also uniquely American.

The Yankee tunesmiths’ main influence was English “West Gallery” music, so named for the wooden east-facing galleries in churches from which choirs would perform. West Gallery music primarily consists of metrical psalm settings, anthems, and “fuging tunes” (not to be confused with fugues), songs that contained canons. The major composers in this tradition were William Tans’ur and Aaron Williams. West Gallery music died out in the mid-19th century when the use of organs in churches became commonplace.

Some of the Yankee tunesmiths led quite productive and interesting lives outside of music. Supply Belcher, known as the “Handel of Maine,” was variously a tax assessor, schoolmaster, clerk, judicial officer, magistrate, and representative to the Massachusetts General Court. Oliver Holden, whose tune “Coronation” is the oldest American hymn tune still commonly sung, served as a marine during the Revolutionary War and was a carpenter, real estate dealer, and representative to the Massachusetts legislature. Jeremiah Ingalls worked as a farmer, cooper, and taverner.

The most prominent early American composer was William Billings. Born in Boston in 1746, Billings dropped out of school at 14 and trained as a tanner. Apart from having received some musical instruction from a member of a local church, he was self-taught. Billings wrote more than 300 compositions, almost all of them four-part choral works, which were published in six book-length collections. Despite his lack of formal education, he was a talented writer and wrote essays on music and other topics. He often altered Biblical texts to make them more florid and expressive (a bold move at the time).

Billings’ first collection was The New England Psalm Singer, which was published in 1770. It was the first collection of exclusively American music to be published in America and launched a movement of grassroots American choral singing. Paul Revere engraved its frontispiece. The collection contains over 120 songs, including “When Jesus Wept,” a short but poignant fuging tune, and “Chester,” a patriotic anthem popular during the Revolutionary War. An interesting feature of The New England Psalm Singer is that it begins with a lengthy introduction to the fundamentals of music theory and acoustics. It appears that since texts on music theory would have been nowhere to be found in colonial America, Billings took it upon himself to write one.

Psalmody was an important part of colonial American life. The first book ever published in America (in Cambridge, Massachusetts in 1640) was a metrical psalter entitled the Bay Psalm Book. The ninth edition of the psalter, published in 1698, was the first published book in America to include music. The earliest form of systematic music education in America — “singing schools” — arose out of a movement to establish the use of written music in psalm-singing. The first singing school was founded in Boston in 1714. (A little over a century later, the first conservatory in America was founded in Boston.) Students were instructed by itinerant musicians who held gatherings in barns, taverns, schoolhouses, and similar locations. Most of the Yankee tunesmiths taught at singing schools, including Billings. The Old Stoughton Musical Society, the oldest musical ensemble in America, was formed by members of Billings’ singing school in Stoughton. The emergence of singing schools, which became an important part of community life in New England, was accompanied by an increase in the publication of “tunebooks,” or collections of songs and a flourishing musical culture.

Early American composers had little in the way of education apart from singing schools. Cut off from the great institutions and concert halls of Europe, they learned mostly by doing. Their approach to composition was individualistic and experimental. Billings describes his philosophy in the introduction to The New England Psalm Singer:

For my own Part, as I don’t think myself confined to any Rules of Composition, laid down by any that went before me, neither should I think (were I to pretend to lay down Rules) that any one who came after me were in any ways obligated to adhere to them, any further than they should think proper: So in fact I think it best for every Composer to be his own Carver. [1] [2]

Billings drily acknowledges that “perhaps some may think I mean and intend to throw Art intirely [sic] out of the Question” and notes that “Study” and craft are also important. [2] [5]

The Yankee tunesmiths’ distance from contemporary musical developments in Europe led to the creation of a distinctly American sound. Though similar to English psalm-singing, early American music sounds rougher and more vigorous and often departs from convention (e.g., by omitting thirds and using parallel fifths and octaves, which has a medieval-sounding effect). Notable examples of pieces by Yankee Tunesmiths include Billings’ “David’s Lamentation,” “I Am the Rose of Sharon,” “Creation,” “Easter Anthem,” “Euroclydon,” and “Brookfield”; Daniel Read’s “Windham”; and Lewis Edson’s “Bridgewater.”

Billings’ “Jargon,” a short musical joke from The Singing Master’s Assistant, deserves special mention as a testament to his wry sense of humor and his disregard for popular opinion. Paired with a humorous satirical address entitled “To the Goddess of Discord,” nearly every chord in the song is dissonant.

By the time of Billings’ death in 1800, the music of the Yankee tunesmiths had largely fallen out of fashion among educated New Englanders, who saw American music as crude and primitive. Billings’ unkempt, deformed appearance and humble origins may have reinforced this view. He died in poverty (partly due to weak copyright laws) and was buried in an unmarked grave. That notwithstanding, the Unitarian minister and columnist William Bentley, who most likely met Billings at the height of his fame, published a favorable, albeit not uncritical, obituary in which he described Billings as “a man above the common abilities” and “the father of our new England music.” [3] [6] His view was shared by critics such as Nathaniel Gould and Alexander Thayer (the future biographer of Beethoven [7]), who saw Billings as a musical genius hampered by his ignorance of the “rules” of composing. [4] [8]

Despite the occasional nod to Billings’ talent, the general consensus among the educated was that American music was “extremely faulty.” [5] [9] The most ardent proponent of this view was Lowell Mason, a prominent 19th-century composer of church music and the leader of the “Better Music” movement. Mason was the main figure responsible for the decline of Sacred Harp singing (which was associated with singing schools and the Yankee tunesmiths), which he considered to be unscientific and in need of correction. Thanks to his reforms, the legacy of the Yankee tunesmiths in New England was virtually eradicated. It lived on in parts of rural New England for a time, but it really only survived in the rural South, where it still exists today. There is a direct link from the church music of early 18th-century England to contemporary worship in rural Appalachia.

Having grown up singing Protestant hymns of the Mason variety, I much prefer the more vigorous, imaginative polyphony of the Yankee tunesmiths and Sacred Harp music. Most hymns written by 19th-century New Englanders are dully correct and lifeless. They sound like exercises in harmony written by a student. For instance, altos and tenors are usually made to sing the same two or three notes over and over for the entire hymn. The melodies are not very interesting either. The dreary quality of these hymns can also be attributed to the restrained manner in which they are sung. The shape note tradition encourages a more participatory, spirited style of singing. [6] [10]

The music of the Yankee tunesmiths has enjoyed a revival in recent years and has been recorded by a handful of early music ensembles. I recommend Paul Hillier and His Majestie’s Clerke’s “A Land of Pure Delight”: William Billings — Anthems and Fuging Tunes and Ghostly Psalms: Anglo-American Psalmody 1550-1800 and Early Music New York’s Colonial Capers, which intersperses early American choral works with country dance tunes played by a small instrumental ensemble. I also recommend Early Music New York’s A Colonial Christmas, which gathers seasonally appropriate pieces by Billings and his contemporaries, and the Tudor Choir’s An American Christmas: Shapenote Carols from New England and Appalachia. Early Music New York has also recorded albums of Christmas music dating from the Middle Ages, the Renaissance, and the Baroque era.

There’s more kinship between the Yankee tunesmiths and great 20th-century American composers like Charles Ives [11], Harry Partch [12], and Henry Cowell (who paid homage to Billings with his wonderful Hymns and Fuging Tunes, written between 1943 and 1964) than one might expect. All were autodidactic tinkerers and innovators who defied convention and created unique sound worlds. Billings and Ives would have gotten along swimmingly.