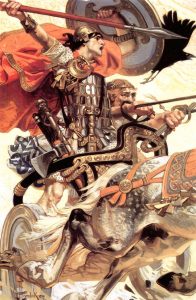 If you were to ask the average American about Irish culture, they might talk about leprechauns, shamrocks, Guinness, and St. Patrick’s Day. While these might be silly tropes and marketing gimmicks, they sparked my interest in Irish mythology and folklore. From Táin Bó Cúailnge to the Annals of Ulster, there are many stories of Irish heroes who protected their land from invaders. As I walked along the Ulster coast this week, I thought about those heroes. Just like Cú Chulainn and Brian Boru, the Dissident Right can inspire our people to stand up for their own lands, sovereignty, and identity. All we need is a little pot of gold and the luck of the Irish.

My fascination with Irish folklore started when I was a kid. My favorite cereal was Lucky Charms, which featured a leprechaun with a pot of gold on the cereal box. My grandmother would prepare my breakfast while telling me stories about leprechauns, fairies, and druids. A few years later, I found a bargain-bin book that included excerpts from Irish Fairy Tales by W. B. Yeats. I have many fond memories of reading these Irish folktales late at night and then sneaking into the kitchen for a sip of Bailey’s Irish Cream. To this day, I still enjoy an Irish coffee with Baileys after dinner.

During college, I started drinking Guinness and reading medieval literature. This was when I discovered the four main cycles of Irish mythology: the Mythological Cycle, the Ulster Cycle, the Fenian Cycle, and the Historical Cycle. The Mythological Cycle comprises all the tales of the gods and goddesses that came to Ireland after the creation of the world. The Fenian Cycle includes all the works written about the mythical hero Fionn Mac Cumhaill and his group of warriors called the Fianna. The Historical Cycle contains the poems that bards and poets created about the legendary kings of Ireland. Yet the cycle with the largest body of work is the Ulster Cycle.

The Ulster Cycle includes the heroic sagas and legends of Ulaid, the Gaelic kingdom from the Middle Ages in what is now Ulster. The stories were written in prose with some poetic verse used for certain dialogues. These stories were originally oral tales that began to be written down in the 12th century. The events of the Ulster Cycle take place around the 1st and 2nd centuries. During this time, the Gaelic kingdoms were at war with each other over cattle raids and dynastic rivalries. The most prominent hero of these tales is Cú Chulainn.

Being the son of a God, it was prophesized that Cú Chulainn (the hound of Culann) would live a short but heroic life. He became known for his battle frenzies where he would turn into a powerful monster and attack both friends and enemies. Cú Chulainn would ride into battle with his chariot and he always fought with his magic spear. At the age of 17, Cú Chulainn single-handedly defended his kingdom from invaders. This story is told in Táin Bó Cúailnge, one of Ireland’s national epics and the most popular tale from the Ulster Cycle.

Táin Bó Cúailnge (The Cattle Raid of Cooley) is often described as the Irish version of the Iliad. After King Ailill and Queen Medb compare their wealth and cattle, they try to steal Donn Cuailgne, Ulaid’s prized bull. To steal the bull, Queen Medb has a curse put on the men of Ulaid to prevent them from defending their kingdom. The queen then orders her army to invade Ulaid. The only person that can stop Queen Medb and her army is Cú Chulainn. Along with battling the army, Cú Chulainn must also fight and outwit Morrigan, the phantom goddess of war. After surviving various battles and duels, Cú Chulainn eventually defeats the army. As a gesture of peace, he allows Queen Medb to take Donn Cuailgne back to her kingdom. Queen Medb’s white bull fights with Donn Cuailgne and both bulls eventually kill each other and die. With a little luck, the Irish people will no longer kill each other over cattle.

I read Táin Bó Cúailnge during my first year at college. It reminded me of the Iliad, and I could easily imagine medieval bards singing and performing these stories to music. Some of the metal bands I was listening to at the time got their names from the various characters (Morrigan) and places (Cruachan) from Táin Bó Cúailnge. I greatly enjoyed reading this Irish epic and it inspired me to find out more about the history of the Ulster region. After searching online, I discovered that there was a medieval chronicle called the Annals of Ulster. While there was not an official printing or publishing of this chronicle, I was able to find some versions of the text online.

The Annals of Ulster are the historic chronicles of Ireland from 431 to 1540. The entries up to the 8th century draw from earlier texts. A scribe named Ruaidhri O Luinin compiled many of the later entries together in 1489. While most of the entries are limited to the dates of births, battles, and deaths, these entries act as the building blocks to the legends of the various Irish kings and warriors. Olaf Guthfrithson lost men and his credibility at the Battle of Brunanburh in 937. King Máel Sechnaill Mac Domnaill regained Dublin from the Vikings at the battle of Tara in 980. One of the most important events listed in the Annals of Ulster is how Brian Boru saved Ireland at the Battle of Clontarf in 1014.

Brian Boru was born in 941. Following in the footsteps of his father and elder brother, Boru became the King of Munster, the King of Leinster, and eventually the High King of Ireland in 1002. Boru quickly became one of the most powerful rulers in medieval Ireland. His power was eventually challenged when his land and allies were attacked by King Máel Sechnaill Mac Domnaill. This attack was followed by an assault by Norse King Sigtrygg Silkbeard and Máel Mórda Mac Murchada in 1013. Boru gathered his army and marched against his enemies. These events led to the Battle of Clontarf on April 23rd, 1014.

Boru and his army fought against Sigtrygg, Sigurd of Orkney, and a combined force of over 6,000 men. The battle lasted several hours and ended with Boru’s army defeating the Vikings and their allied forces. It is estimated that over 7,000 men were killed in the battle. Among the deaths were Sigtrygg Silkbeard, Máel Mórda Mac Murchada, Sigurd of Orkney, and Boru. Boru has since been considered a national hero who saved the Irish from foreign domination. Along with the Annals of Ulster, Boru’s death was also mentioned in Njal’s Saga and the Orkneyinga Saga. Ever since I started reading about these characters and events, I have always wanted to visit Ireland. Despite ongoing lockdowns and travel restrictions, I was lucky enough to finally visit Dublin and Ulster this year.

I decided to get the tourist sites out of the way first. During the first two days, I visited the Guinness Storehouse, the Jameson Distillery, and the Temple Bar area. I wanted to see the Annals of Ulster on display at the Library of Trinity College, but the library was closed during the COVID lockdowns. I eventually took a train to Ulster. I spent an entire week in a small town along the Irish coast. Each evening, I would have a small dram of whiskey, a small pint of Guinness, and an Irish coffee at the local pub. After dinner, I would take a long walk along the shore. During my walks, I thought about Táin Bó Cúailnge and the Annals of Ulster. I thought about Cú Chulainn and Boru. I thought about my life and the challenges white people face in these crazy times. Instead of feeling depressed, I felt happy. Instead of feeling cursed, I felt lucky.

I feel lucky to be alive during these times. This is the period of history that I was destined to experience. Whatever problems we face today and tomorrow, they are the problems that only we can solve. Cú Chulainn and Boru were the great heroes of their time, and now it is our turn to become the heroes of tomorrow. We must find the courage to counter all the anti-white propaganda being pushed by academia, the media, and the tech corporations. We must continue protesting draconian lockdowns and election fraud. We must never back down from censorship, slander, or doxing. Just like Cú Chulainn and Boru, we must help our people stand up for their lands, their sovereignty, and their identity. Although we live in dark times, I think that there is a shiny pot of gold at the end of the rainbow. And with a little hope, perseverance, and luck, we can secure the existence of our people and a future for white children.

After finishing my Guinness and Irish coffee, I took one last walk along the Ulster shore. During my walk, I passed by an old abbey where the Annals of Ulster and the Táin Bó Cúailnge were written down throughout the centuries by monks and scribes. Without those scribes, I may have never gotten the chance to read the adventures of Cú Chulainn and Brian Boru. I greatly appreciate the time, effort, and sacrifices they made in keeping Irish history, mythology, and folklore alive. I hope I can keep their stories alive while chronicling my own sagas and adventures. From cereal-box leprechauns to late-night Irish folk tales, I will have a lot of stories to tell my future grandkids on St. Patrick’s Day.

As a wanderer and a dissident, I am thankful for having the luck of the Irish.