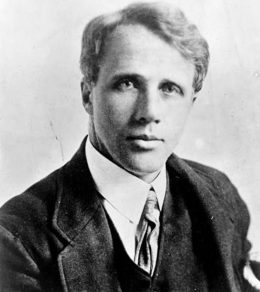 Puritan-descended poet Robert Frost in the 1910s, about 40 years old. Even his physiognomy was Yankee.

Discussing Robert Frost’s collection Steeple Bush in the New York Times upon its release in 1947, poet Randall Jarrell devoted the bulk of his review to quoting and summarizing just one poem, “Directive,” saying,

Reading through Frost’s new book one stops for a long time at “Directive. . . .” There are weak places in the poem, but these are nothing . . . Much of the strangeness of the poem is far under the surface, or else so much on the surface, in the subtlest of details, that one slides under it unnoticing. There is nothing else in Steeple Bush like “Directive.”

I personally like “A Case for Jefferson [2]” as well. It’s not long, or complex, but it’s good.

Though born in San Francisco to a journalist father who was part of the Yankee exodus from New England, Frost had deep roots in the region.

The founder of the Frost line in America was Puritan Nicholas Frost, who arrived in Rye, New Hampshire on the ship Wulfrana in 1634. For context, Plymouth Plantation (the Pilgrims) was founded in 1620, and the Massachusetts Bay Colony in 1630.

On July 4, 1650, Nicholas Frost’s wife and daughter were captured by Indians “and taken to a camp at the mouth of Sturgeon Creek. Nicholas and his son, Charles [also Robert’s lineal ancestor], attempted to rescue them, but were unsuccessful. Charles, however, killed a chief and a brave. The next day Charles, his father, and some of the neighbors went back to the camp but were too late. The camp was deserted, only the bodies of Bertha and Anna were found there.” (See here [3].)

Frost was also a descendant of Puritan divine George Phillips, who arrived in Salem, Massachusetts (Bay Colony) in 1630 aboard the Arbella, the flagship of the Winthrop Fleet. Fellow passengers were John Winthrop and his family including son John Winthrop the Younger, Anne Bradstreet, Captain John Underhill, Thomas Dudley, and Richard Saltonstall.

A third Puritan ancestor of Frost’s was Samuel Appleton, a military and government leader in the Massachusetts Bay Colony who fought in King Philip’s War. His descendants include [5] the founders of D. Appleton book publishers, President Calvin Coolidge, and the wives of President Franklin Pierce and Henry Wadsworth Longfellow.

At age 11, following the death of his father, Frost and his sister moved with their now-impoverished Scottish-born mother from California to the home of his paternal grandparents in Lawrence, Massachusetts, where William Prescott Frost, Sr. was a mill overseer.

Robert Frost attended Dartmouth College in New Hampshire and Harvard but did not obtain degrees. Nevertheless, for many years he was a professor of English at Amherst College in Massachusetts and taught at Middlebury College’s graduate school of English in Vermont. In the 1920s he taught at the University of Michigan, Ann Arbor. Frost’s Ann Arbor house was purchased by The Henry Ford Museum in Dearborn and moved to Greenfield Village for public viewing.

The poet married Elinor Miriam White and had six children.

The somewhat digressive poem “Directive” (1947), written in blank verse [6], is by no means an easy read. Interpretations vary widely, and even knowledgeable people find it perplexing.

It is certainly not, however, an exercise in personal navel-gazing, an expression of angst on Frost’s part, as some have maintained. Frost was against that: “The objective idea is all I ever cared about.”

Critic and author Carl Van Doren perceived the centrality of Frost’s Yankee heritage and sensibility to his work. “If Robert Frost talks as becomes a Yankee poet, so does he think as becomes one.” I’m not certain anybody has really followed in Van Doren’s footsteps in exploring this important matter.

Without rancor Van Doren, a globalist, perceived early on that “As a Yankee [Frost] may have too little general humanitarianism to be a patriot of the planet.” “Has he failed to represent the whole of humanity in his work? He has not undertaken to do that.”

Indeed, Yankee identity is the key to unlocking the meaning of this often murky poem. Frost is specifically addressing his fellow New Englanders on a deep-going level, wherever they may be, and even, perhaps, American whites fully assimilated to Anglo-Saxon culture.

When it comes to interpreting “Directive,” Van Doren makes an extremely astute observation: “Once Robert Frost’s Yankee rhythm and Yankee attitude have been detected, his other qualities become less elusive.” (Emphasis added.)

Van Doren also comments on the relic “Yankee community” of rural New England, “a neighborhood left behind by its more ambitious members” and “overrun by outsiders of another culture” that appears so vividly — at least the depopulated portion does — in “Directive” written a quarter-century later.

Back out of all this now too much for us,
Back in a time made simple by the loss
Of detail, burned, dissolved, and broken off
Like graveyard marble sculpture in the weather,
There is a house that is no more a house
Upon a farm that is no more a farm
And in a town that is no more a town.
The road there, if you’ll let a guide direct you
Who only has at heart your getting lost,
May seem as if it should have been a quarry —
Great monolithic knees the former town
Long since gave up pretense of keeping covered.
And there’s a story in a book about it:
Besides the wear of iron wagon wheels
The ledges show lines ruled southeast-northwest,
The chisel work of an enormous Glacier
That braced his feet against the Arctic Pole.
You must not mind a certain coolness from him
Still said to haunt this side of Panther Mountain.
Nor need you mind the serial ordeal
Of being watched from forty cellar holes
As if by eye pairs out of forty firkins.
As for the woods’ excitement over you
That sends light rustle rushes to their leaves,
Charge that to upstart inexperience.
Where were they all not twenty years ago?
They think too much of having shaded out
A few old pecker-fretted apple trees.
Make yourself up a cheering song of how
Someone’s road home from work this once was,
Who may be just ahead of you on foot
Or creaking with a buggy load of grain.
The height of the adventure is the height
Of country where two village cultures faded
Into each other. Both of them are lost.
And if you’re lost enough to find yourself
By now, pull in your ladder road behind you
And put a sign up CLOSED to all but me.
Then make yourself at home. The only field
Now left’s no bigger than a harness gall.
First there’s the children’s house of make-believe,
Some shattered dishes underneath a pine,
The playthings in the playhouse of the children.
Weep for what little things could make them glad.
Then for the house that is no more a house,
But only a belilaced cellar hole,
Now slowly closing like a dent in dough.
This was no playhouse but a house in earnest.
Your destination and your destiny’s
A brook that was the water of the house,
Cold as a spring as yet so near its source,
Too lofty and original to rage.
(We know the valley streams that when aroused
Will leave their tatters hung on barb and thorn.)
I have kept hidden in the instep arch
Of an old cedar at the waterside
A broken drinking goblet like the Grail
Under a spell so the wrong ones can’t find it,
So can’t get saved, as Saint Mark says they mustn’t.
(I stole the goblet from the children’s playhouse.)
Here are your waters and your watering place.
Drink and be whole again beyond confusion.

“Directive” (n. “something that serves to direct, guide, and usu. impel toward an action, attainment, or goal”; adj. “serving to point direction; pointing the way”), a post-WWII poem, tells the story of a journey back in time (“Back in a time made [deceptively] simple by the loss of detail”), whose destination is identified at the outset (though in reverse order of travel) to

The actual movement later is from town to farm to house — from general to specific.

The reference to the Grail (also “the adventure”) reveals that the poem is structured as a grail quest — the quest for identity.

A common point of confusion is contained in the lines

The road there, if you’ll let a guide direct you
Who only has at heart your getting lost,

One must keep in mind the demands of meter and so forth, but, regardless, the “guide” actually has at heart your not getting lost. That is the meaning of the passage.

Furthermore, the “guide” is not an accompanying trickster or even prankster narrator intending to hoodwink his unwary fellow travelers, but rather the reader’s own unconscious, his true north. So, too, are the “me” in another line of the poem and the “I” near the end. None refer to a third person.

A message we can find in this poem (the wrong ones can’t) is: Yankee, “Back out of all this now too much for us,” cut it away, leave it behind. Begin the necessary inward journey to your wellsprings, until “you’re lost enough to find yourself.” For it is a journey inward, flipped inside out and depicted externally that is being described in typical Frost fashion (“Stopping By Woods on a Snowy Evening,” “The Road Not Taken”).

Rediscover the vanishing foundations of your true house, a “house in earnest.”

Your destination and your destiny’s
A brook that was the water of the house,
Cold as a spring as yet so near its source . . .
Here are your waters and your watering place.

Drink, using the “broken goblet” — your conscience, your fractured inmost mind and spirit, which dwell within you “like the Grail under a spell so the wrong ones can’t find it.”

In Arthurian legend the Grail is revealed only to the purest knights, so only the select can find the metaphorically broken children’s chalice concealed in the instep arch of an old cedar at the waterside.

Drink and be whole again beyond confusion.

Following our interpretation: Reject self-hatred and the hatred others have for you. Embrace your roots. Find yourself.