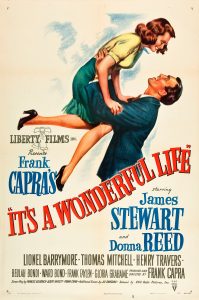 In keeping with my annual Christmas season ritual, I am currently enjoying a much-needed vacation with extended family in Appalachia. Every year, my aging aunt graciously hosts my family: me, my children, and our dog. This year the experience has been all the more special because she bought a DVD copy of It’s a Wonderful Life, the 1946 Christmas classic starring Jimmy Stewart and Donna Reed, and last night we gathered around her flatscreen to watch it.

It is an anomaly of sorts that neither of my children prior to this year had seen this film. I’m a “cord-cutter” who rarely watches TV, but I’ve always found creative ways to stream media that I deem worthy for my children to watch. Frank Capra’s masterpiece is literally my favorite holiday film, and one of my all-time favorite movies, period. How did I go this long without exposing them to it?

An essential quality of a great film, one that is truly timeless, is that no matter how many times you view it you learn something new, uncover a deeper meaning, or experience new emotions. This is exactly what happened to me this year, despite having seen it dozens of times. As such, I would like to expatiate on my experience and share the nuggets I gleaned.

The story begins circa 1919 in a fictitious “anywhereville” town named Bedford Falls, the character of which implies a semi-rural upstate New York community, with its typical Main Street and town square. Bedford Falls hosts a drug store, a “Building and Loan” run by the protagonist George Bailey (Jimmy Stewart) and his family, and a powerful bank owned by the antagonist, Mr. Potter (Lionel Barrymore).

Mr. Potter immediately conjures up a stereotype that some would refer to as an “antisemitic” trope. However, a more astute audience will clearly recognize that Mr. Potter’s character is modeled after the financier J. P. Morgan, and all of his behaviors and actions, even his physical appearance, are allusions to this financier and robber baron who famously brokered the framework of our current Federal Reserve system and who (some would say) had a hand in the Great Depression. To be sure, there were powerful Jews involved with the Morgan financial empire, but I would not entertain the notion that the Potter character was written as a dog whistle.

George Bailey is introduced as a young, popular kid in his community. He is the older brother of Harry, who we are introduced to when he has a sledding accident and George dives into a frozen pond to save his life. George’s character is defined at this moment. He’s always the responsible one, the one who sacrifices himself for the good of everyone else. As we will see later, George’s virtues will be what saves the day at the film’s conclusion.

Most of the movie is spent following George Bailey as he makes these sacrifices for his family and community year in and year out. In one incident, a teenage George Bailey keenly notices when his pharmacist employer, Mr. Gower, mistakenly fills a prescription with a poisonous substance. Distracted by the recent death of his son, and evidently drunk, Mr. Gower sends George out to deliver the prescription and berates him when he fails to do so. Mr. Gower ultimately becomes indebted for life to George, however, when he is made aware of his error. George has not only prevented him from killing a sick child, but has also saved him from a certain prison sentence.

In later scenes, George gives up on his dreams of international travel and attending college when his father passes away. The Bailey family Building and Loan business is in threat of liquidation by a scheming Mr. Potter, who serves on its board. This is the first of many attempts by Mr. Potter to rid himself of the thrifty, almost charitable Bailey Building and Loan that serves the Bedford Falls community with affordable home loans (as opposed to the high-rent, substandard real estate that Potter is peddling.)

George Bailey, having given up on traveling and college, instead marries Mary Hatch (Donna Reed). In another act of selflessness, George saves Bailey Building and Loan — and the entire Bedford Falls community — from the stock market crash and subsequent bank runs when he donates his honeymoon money to the company’s board, pacifying their desire to withdraw all of their funds. Not only does he ease the frustrations of the community, but he also prevents a corrupt Potter from buying up the community’s stocks and bonds for pennies on the dollar and ultimately owning the entire town.

Time after time, George Bailey watches the people around him live up to or exceed their own expectations while he settles for a life that he never wished for. His brother Harry goes on to win a congressional Medal of Honor during WW2. Congruently, Sam Wainwright, a mutual friend of George and Mary, goes on to become a wealthy executive. George anchors the Building and Loan the entire time, dreaming of a life that is seemingly out of reach.

Things come to a head one Christmas Eve when George’s uncle Billy, who clerks for the Building and Loan, fumbles a large money deposit at Potter’s bank. He inadvertently hands Mr. Potter $8,000 cash in an envelope stuffed inside a newspaper (a large sum in the 1940s, where the plot has by now taken us.) It is by dumb luck that a bank examiner has decided to audit the Building and Loan’s books on this Christmas Eve, and this missing $8,000 is sure to land George Bailey in prison.

This is where It’s a Wonderful Life takes a supernatural turn, a plot twist with echoes of Dickens’ A Christmas Carol. Contemplating suicide for all his woes, George Bailey is saved from his own self-pity by a hapless, “wingless” angel named Clarence (Henry Travers). Standing at a bridge in the freezing snow, George starts to jump into ice-cold water when, out of the blue, the angel named Clarence jumps into the water instead, and George, true to character, selflessly jumps in to save Clarence instead of killing himself.

This flightless angel has been sent to show George what life would have been like if he never had been born (a wish that he mutters while contemplating his predicament). Upon completion of this mission, Clarence will be promoted from angel 2nd class to angel 1st class, thus securing his wings.

At this point, George is introduced to a dystopian alternate timeline where Mr. Potter is basically king, owning all the property in “Pottersville.” George Bailey’s selflessness never manifested, and he never touched another life with his kindness. The town is dotted with liquor stores, burlesque dancing, raucous boozing, gambling, and all the cosmopolitan blight that one would expect to see in the most corrupt of urban areas, not a small, wholesome, semi-rural town.

After a dazed and confused ordeal of meeting dozens of his family and friends who do not recognize him, and who have led miserable, depressing lives in his absence — or worse, who died, as in the case of his brother whom he saved from drowning, he begins to realize that his seemingly meaningless life isn’t so meaningless after all. No amount of travel or adventure could replace the positive impact he has made, or the wholesome family he has created with Mary.

The movie concludes with the alternate timeline reversing itself. George finds himself back at the bridge, where his friend Bert the Cop discovers him and brings him good news.

The entire town has come together after learning about the missing $8,000 and crowdfunded enough money to save George and the Building and Loan from prison and bankruptcy (and Mr. Potter from finally getting his wish of liquidating it). The final scene famously ends with his daughter “Zuzu” noticing a bell on the Christmas tree ringing, signifying that the angel Clarence has received his wings, and the entire town erupts in a rendition of “Auld Lang Syne” as the credits roll.

There are so many themes in this movie that ring loudly and clearly through the decades to the world we find ourselves in 2020, with the COVID crisis and worsening economic situation. It is most certainly a traditionally Christian holiday movie, but it is secular enough that anyone who values family, community, and tradition can identify with it. Buried inside all of that normie-friendly wholesomeness — and not all that deeply, mind you — are tons of messages that a Right-wing dissident should recognize as well.

Bailey Building and Loan is the charitable spirit that homogenous, trusting people in racially coherent communities extend to one another. The cutthroat capitalist nature of Mr. Potter and his large, soulless bank are the deracination and predation of globalist mega-corporations, and dystopian Pottersville, with all of its debauchery and degeneracy, is the logical outcome of the greed of unregulated capitalism.

George Bailey is the neighbor, friend, coworker, or random stranger in your community who you just know is on your side. The man or woman who works and pays taxes, who loves their children and family first and foremost, who recoils at the thought of another megastore and apartment complex being developed where farmland once stood. The thrifty person who doesn’t throw their used COVID mask on the ground, but who also doesn’t obsess over each and every new finger-wagging scold article about climate change. The person who still has the good sense to not wish for their daughter to marry a black man so that they can virtue signal about it on social media. George Bailey is the Trump supporter next door.

To put it frankly, Bedford Falls is what our enemies fear the most. Yes, it is a fictitious town, and George Bailey is a fictitious man. But they do ring true in a plethora of ways. How many small semi-rural towns in recent decades have changed zoning laws to be more welcoming of liquor stores, gambling, and other tax revenue-generating endeavors at the cost of the local citizenry? How many George Baileys have been cast aside in favor of out-of-town investors? As community standards have given way to libertarian ideals, how many low-income housing projects have been built to accommodate the growing unemployed and “diverse” demographics that these changes invite?

Through the woke, “redpilled” eyes of a nationalist, a populist, or a true social conservative, it should be clear that It’s a Wonderful Life represents everything we strive to create and uphold. This should be requisite viewing for anyone who wants a model to point to or an echo from the past to glean wisdom from.

« The Only Honest Person in the Room

» No Country for Old Ghosts: A Literary Tour of Gothic America