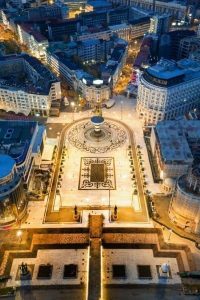 Grandpa pissed his pants again,
He don’t give a damn.
Brother Billy has both guns drawn,
He ain’t been right since Viet Nam.

There is by now a very predictable pattern to a certain subgenre of twitter dot com drama. Step one: Nassim Nicholas Taleb tweets something controversial. Step two: people, due to a variety of factors, misunderstand what he tweeted. Step three: drama ensues. Last week was no different.

When you see *from the outside* a quaint village with a seemingly idyllic life, consider that the locals are preoccupied with local intrigues, split into fractious alliances, and entangled into petty disputes.

I could see the direction this would take. He used the word “harmonious.” He also used the phrase “the oil of commerce.” This is problematic enough on its face, because the word harmonious contains nuance that flies over the head of the typical midwit. This is compounded by the fact that Taleb’s meaning of these words is a little different from the dictionary definition — you have to have read at least some of his work (preferably Antifragile) to understand exactly what he means by “harmonious” and “oil of commerce.” Briefly: Harmonious things are bereft of randomness, stressors, disorder, conflict, friction, etc. Here we come to our first problem, which in order to explain, we have to take a short detour into the field of human biodiversity.

In my observations of the human animal, I’ve come to conclude that there are levels of intelligence below which all qualities and categories are collapsed into a binary “good” and “bad.” As such, all words we use to describe concepts, particularly in the societal sphere, are treated as mere restatements of the words good and bad, perhaps made up to look more intellectual-like. The threshold at which the nuance disappears is disturbingly high (somewhere between 110 and 120 IQ, I’d wager). And so a word like harmonious is understood to basically mean “good.” I mean, how can harmony be anything but good? Have you ever heard a disharmony? I had a friend in college who ran an electronic music band literally named Disphilharmonia, specializing in disharmonic electronica. I went to one of their gigs out of comity. There weren’t even good-looking girls.

But our research team here at Counter-Currents informs us that indeed, there exist such things as bad harmonies. For example, a hostile tribe acting in harmony to harm us can be a very bad thing indeed. A hostile army acting in harmony against us is a bad thing. And that’s not even getting into Taleb’s ideas on Mediocristan vs. Extremistan whence comes his specialized meaning of harmony, missed by all those angry and incredulous reply guys. A steady, featureless, harmonious society that suppresses the disorder family of events (randomness, stressors, conflict, friction) sets itself up for gigantic failures in a similar way that suppressing minor fires in a forest sets the forest up for a massive, unstoppable inferno once enough fuel builds up on the forest floor.

Indeed, we do not see a moral valence to harmony in the dictionary definition. It is a state of agreement and concord. But again, those words have a measure of “good” contained in them. Agreement? Who’d want to disagree? Or to be disagreeable? Ugh! It contains that nasty modifier “dis,” which we remember from disharmony. I am told inner-city American Negro chieftains use “dis” to proclaim private wars and vendettas against each other. Bad word, signifying bad things, bad bad bad, tfu, tfu!

The honest thinker comes to the world assuming that the definitions of words are agreed upon and clear, but I suspect nothing could be further from the truth, because as Semiogogue would point out, the combinations of sounds that make up a word are (almost) completely arbitrary and I tend to agree. But what if meaning itself is asymmetrical, and in the heads of some people exist entire categories of meaning which other, lesser men cannot even conceive of? It would certainly account for the so-called qualitative difference of thought observed by many in the highly intelligent, something that isn’t adequately explained by mere intelligence understood as raw processing power (or literal quickness of thought, as it strongly correlates to reaction times). What if there’s either an occult quality to some men, or an emergent property of fast and efficient thought (quantity having a quality of its own) that allows them to find categories of meaning where other men can’t? And if this is so, how can the first class of men communicate with the other?

What a fun little detour. We asked a lot of questions and did not provide a single answer. We merely clarified that people indignant about Nassim Taleb calling cities harmonious don’t understand the full meaning of the word harmonious, especially as used by Nassim Taleb. But what can we learn from the actual pronouncement?

Rural life is indeed fractious and fraught with local intrigue. It is, in a sense, full of pervasive low-level disharmony. Villages tend to be Dunbar-number (150 people) compliant, which is to say that during your day, month, year, or lifetime, you needn’t interact with countless numbers of faceless strangers. Rather, you’ll find yourself interacting with the same people over and over again.

They particularly remember slights, insults, rudeness, debts, tribal and clan disputes, the iniquities of land demarcation, distribution and use, the neighbor’s gaze lingering for a little too long on the old lady’s rear end. They also remember kindness, friendship, comity, unity, help in troubled times, and that one time when you gawked at a different neighbor lady’s rear end together. It’s, in other words, a rich life full of social interactions because “everybody knows everybody” — but anyone who knows anything about people will tell you that social interactions are not always pleasant. Petty disputes can be very fun, but they sometimes escalate into nastiness. For example, I often joke that the modal Macedonian murder goes something like this. Step one: man is drinking with his brother. Step two: they argue over land demarcation. Step three: man kills brother with an axe. Step four: man sobers up in the morning and turns himself in.

Contrast that to city living. I get up in the morning, go to work (hawk, ptooey), say a bland hello to my neighbor (even though I’d like to show this annoying, noisy little man what for), pop into a coffee stand to get my coffee to go, say a bland hello to the barista girl whom I know flirts with me just for the tips (even though I’d love to ravish her in the fields), say a bland hello to my colleagues at work (knowing that they want to give me shit but are too socialized to antagonize me), say a bland hello to the checkout girl at the supermarket (again with the ravishment). It’s all a big nothing, really, but it runs smoothly enough to grind my soul into dust over a period of 20-30 years. The honest Dissident Rightist takes note of the pros and cons and concludes he’d rather risk killing his brother in a drunken rage than keep on living like this.

And this is what we mean when we say “atomized individual.” When you are an atomized individual, you are not part of a tribe or clan. This has its drawbacks, but also its benefits. When you are part of a tribe, then tribal enemies are your enemies too. When man is born into a tribe, he is born with enemies. There’s (hopefully) a white baby being born this instant who instantly has enemies, just by virtue of being white. This is what it means to belong: not just friends, but enemies. The atomized individual doesn’t belong, therefore he has no friends, but he also has no enemies. All his relationships are transactional, made frictionless with Taleb’s oil of commerce. Thus, paradoxically, despite interacting with far more people than the village-dweller, the city slicker has far fewer, possibly zero relationships, either friendly or hostile. The most hostility a city slicker will encounter is mild rudeness in a checkout line. He knows nothing of the long-simmering, intergenerational vendettas such as those of the Hatfields and McCoys. Is this a good thing? Surely the price of conflict is too high.

Personally, I have something of a reputation in meatspace of being very difficult to get along with. This reputation is not unearned. I try to think of myself as living in the country and for the life of me, I can’t see myself as a villager. It’d mean getting along with all sorts of people I wouldn’t choose to associate myself with. That’s the great privilege of the city slicker, the atomized individual: not to suffer fools and to deal with men you’re born into relationships with. Living in the modern city means picking and choosing from a vast kaleidoscope of people to associate with. And now even the city is too small as we move online. People on our side will often talk about moving out to the country, but I’m not sure they understand what living in the country entails. Maybe they have the same agrarian, romantic view of the village that Nassim Taleb (a man born in the country, if currently a city slicker) criticizes.

But more to the point. The transactional harmony of city life fragilizes. It makes us unable to handle the fractious and contentious life of the village. It makes us into special snowflakes that dump people who insult us because you can always find new friends in this teeming metropolis. And failing that, there’s always the internet. To live in the village, with its conflicts, petty rivalries, and clannishness is to be a human being, warts and all.

To live in the village is to live in Nassim Taleb’s Mediocristan, where low-level internecine conflict burns away the deadwood that accumulates in the cities. In urban Extremistan, conflicts are few and far between — but always of an intensity and scale you’ll never find in a village.