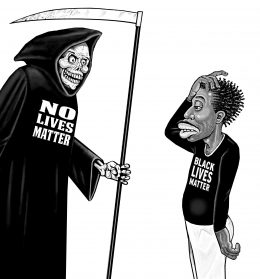 As someone whose formal training is in journalism and who also likes to pretend that journalism at least still exists somewhere — even as a concept — I’ve bitten my lip bloody for five years as this “Black Lives Matter” chant has grown both ubiquitous and deafening, but not once have I heard a reporter do his job and say:

As corporations and newsrooms and police departments fell like dominos to this unprovable and unfalsifiable mantra — threatening anyone who didn’t numbly chant along with eternal social ostracism — never did I hear anyone have the guts to stand up and say:

“That’s only an opinion.”

Countering with “All lives matter” is just as dumb and unquantifiable. In a way, it’s even worse due to its wishy-washiness.

Whatever forces set the universe in motion seem to have made it clear that if any life mattered, those lives wouldn’t ALL end. Same goes for anyone who waxes sentimental about the alleged “sanctity of life” — if this was even remotely true, every human life wouldn’t end as a shriveled-up carcass.

These dolts seem to think that if you robotically chant “Black Lives Matter” into the void forever, the universe will abruptly change course and start caring about human life in general.

There are countless problems with American education and the collective American “intellect,” but one of biggest pus-oozing sores is this stupidly defiant refusal to distinguish between the objective and the subjective.

The objective can be measured; the subjective is merely a feeling. I understood this basic concept in second grade; why has most of the world seem to either have forgotten it entirely or never learned it in the first place? It’s easy to prove someone was killed — just call a coroner. But whether that person was “evil” or “deserved it” can never be proved — and it’s fundamentally a dippy, drippy, dewy, and screwy female way of looking at things — which is why I roll my eyes whenever otherwise intelligent people try to drag such hyper-emotional voodoo terms into the discussion.

In truly objective terms, no life matters because it’s impossible to prove that it matters.

If you’re even halfway sane, your life should matter to you more than anyone else’s. You are programmed to survive, and thus your brain thinks that the most “moral” thing on earth is your immortality. The big problem here is that when you have a world filled with people whose lives matter to them far more than everyone else’s life matters to them, sooner or later everyone will run into some rather messy conflicts of interest.

If you want to say that black lives don’t matter to black people because of the oceans of septic tanks overflowing with aborted black fetuses, the rotting mounds of black bodies piled up at the hands of black murderers every year, and the fact despite their endless whining, blacks tend to do far better when in the proximity of white people than when left to their own devices, I’ve been told that this is a free country and that you should have every right to your opinion.

But over the past year, I’ve heard “Black Lives Matter” maybe 10,000 times for every time I’ve heard anyone, left or right, even mention freedom. It seems as if everyone has silently conceded that we live in a post-freedom society.

It’s funny — as someone who’s been assaulted more than once by blacks and once had a gun shoved in his stomach by a black robber, never once did I wonder whether my life mattered to those black people — or to any black people at all. Based on their behavior, I assumed that my life didn’t matter to them, and I filled out my daily itinerary accordingly.

But if you demand that everyone loves you — as blacks and gays and trannies and women have been doing nonstop for as long as I can remember — that suggests you are insecure about exactly how lovable you are. It’s like the fat woman who constantly needs to hear that she doesn’t look fat in that dress.

I don’t need to be loved by black people, so why are they so fucking needy all of a sudden?

This past Monday I scooped up the wife and headed to the Georgia mountains for a much-needed two-day vacation. We dropped the dog — a thirty-pound Boxer/Boston Terrier mix named Junior [2] — off with some friends en route to the hills. I missed Junior while we were gone and thought of him often.

We also left behind the fat black lady from across the street — the one who decides to put out her trash [3] every month or so and doesn’t care that it blocks half of the road. She’s the same one who signed a lease promising to be the house’s sole inhabitant, then gradually snuck in kids and friends to the point where a humble little two-bedroom cottage now houses three kids and seven adults and is rapidly decaying. She’s the one who shows up in her driveway every morning at 3:00 AM and, like a feral beast marking her territory with urine, decides that the entire neighborhood has to hear her car stereo cranked up to maximum volume for a minimum of fifteen minutes.

If, say, she were suddenly to be hit and killed by a runaway train late at night, would I be nearly as upset as I would be if that train killed my pet pup?

Excepting those who are very close and dear to me, I would rather see most humans mercilessly beaten than any dog or cat. I assume that every human is at least guilty of something, whereas animals are at least blessed with the lack of intelligence that renders them innocent, direct, sincere, and not bursting at the seams with bullshit like most humans are.

I understand that this is a very controversial and risky thing to say; I don’t understand why, though. It makes perfect sense to me. Having Junior around improves my quality of life. Having that disgusting, inconsiderate, loud wildebeest Negress around makes my life far worse.

I’ve never heard of property values plummeting due to a sudden influx of pet dogs into a neighborhood.

The always hilarious Nation of Islam [4] at least concedes that Europeans have lived with dogs much longer than they’ve been forced to live around black people:

You find a people who love dogs, they are classified with the enemy, the devil, who used to use dogs when he lived in the cave. And he made friends with the dog to help protect himself and his family. . . . Their next and best weapons were the dogs. They tamed some of these dogs to live in the caves with their families, to help protect them from the wild beasts. After a time, the dog held a high place among the family because of his fearlessness to attack the enemies of his master. Today, the dog is still loved by the white race and is given more justice than the so-called Negroes, and, is called the white man’s best friend. This comes from the cave days.

Although some still squabble and insist that East Eurasians may have domesticated wolves independently from Europeans, the consensus [5] is that “Europe has played a major role in dog evolution, harbouring the oldest uncontested Palaeolithic remains and having been the centre of modern dog breed creation.”

Whether it was 10,000 or 20,000 years ago, the moment that European hunter-gatherers and wolves started being friendly to one another greatly distinguishes European history from African history — sub-Saharan history in particular. There have always been smatterings of wolves and jackals in Africa, but never in sufficient numbers, and never to the point where humans and canines intermixed and became mutual protectors — and definitely not to the extent where canines were seen as friends, companions, or even family members.

This evolutionary history is reflected in modern American pet-ownership rates. According to Psychology Today [6], “Whites were about 3 times more likely to own a dog and nearly 5 times more likely to own a cat when compared to non-whites.” Blacks are also overrepresented in animal cruelty [7], just like they’re overrepresented in every area of crime.

And though they trip over themselves making it clear they ain’t too fond of white people, blacks still want it to be known that the reason they hate when white people are kind to their pets is because it suggests those white people value their pets’ lives more than they value the average black person’s life [8].

So what if they do? Maybe they’ve had better experiences with Cocker Spaniels than with Latrelle and Tarneshia.

And again, why do you care if I care about you? I’d prefer if you didn’t care about me, so let’s drop it.

We are then lectured that black people are wary of dogs due to the fact that The White Man endlessly terrorized innocent blacks with dogs, at which point this fucking picture [9] will inevitably be trotted out to silence and shame you. 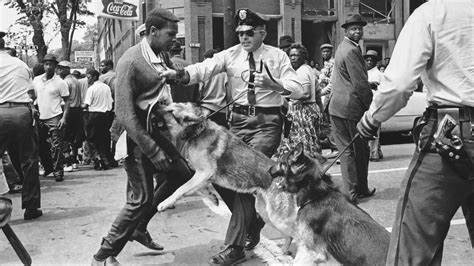 Roughly 3,600 blacks were murdered by other blacks [7] in the USA in 2019. That’s more than the total number of blacks who were lynched [11] in the USA from 1882–1968. Meanwhile, dogs only kill about 30 to 50 people in the USA every year — even being generous and assuming that about half of them were black, this still means that black people should be about 182 times more frightened of other black people than they are of dogs — that is, assuming that black people care about math or are affected by it in any way.

And on top of being expected to care about black people — from every angle, more and more every minute — white dog-lovers are expected to humbly accept hateful ritual scolding [12] such as this:

Overall the takeaway is, [white people] prefer to be treated as gods which is what a dog gives them, they don’t wash their whole bodies so of course they won’t mind kissing a dog that eats feces, and they don’t care about Black and Brown lives.

Rapper Nick Cannon [13] — with a net worth of $30 million — is allowed to say things such as this without being socially and financially destroyed:

And here’s a queer/black/Latin woman [14] who’s so wrapped up in her intersectional identity, it’s a wonder she remembers to feed herself:

[W]hite folks, I don’t care how nice your dog is, dogs have been used as a tool of white control, dominance and violence, from slavery, through civil right to police dogs today. When you let your dogs take up more space than us, you are perpetuating this.

I grew up hearing that Canis familiaris is a breed of dumb animals, but my dog is smart enough to realize that if he growled at me and bared his fangs at me all day, I wouldn’t feed him.