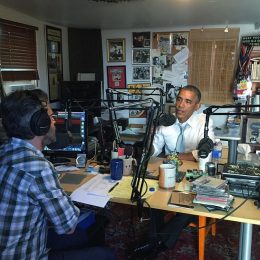 President Barack Obama: “[D]iscrimination in almost every institution of our lives [2] — you know, that casts a long shadow. And that’s still part of our DNA that’s passed on. We’re not cured of it.”

Obama: “Racism. We are not cured of it.”

So: Are you a racist?

Think again, comrade. It’s a gotcha question, not so obvious as “Have you stopped beating your wife?” But that fake “yes-or-no” presentation of the question is what pulls you into the trap. And it’s a trap you are not going to get out of without being mangled beyond recognition.

You may think: “Of course I’m not a ‘racist.’ Easy question to answer and go on about my daily business.”

Did you just fall off the back of the turnip truck, Gomer Pyle? Have you been on Mars for the last ten years or so? Either way you answer, you’re toast.

If you answer “yes,” you’re confessing to what is the most unforgivable abomination imaginable in systemically racist America. You’ll find yourself ranked among the pantheon of celebrated monsters — somewhere below Ted Bundy, the serial killer, and, maybe, depending upon how contrite and tearful you are, above Jeffrey Dahmer, the Milwaukee Cannibal.

Maybe you were thinking: “Okay, I’ve admitted it. Now, mercy and forgiveness.” Ha! You are about to learn how bad you really are. And not just you — your ancestry, your heritage, your history. Your “confession” is just the tip of the iceberg of the infamy that defines you and your kin. You will learn in a very personal, intimate way what the verb “expiate” means:

First, here is the bad news: Dr. Barack Obama spilled the beans about “racism” late in 2016 just before he was getting to leave office, having been twice elected President with the enthusiastic support of lots of white people. Here’s the “skinny” from departing Geneticist-in-Chief: “Racism . . . that’s still part of our DNA that’s passed on. We are not cured of it.”

Now, by “our DNA,” he’s talking about the DNA of white people. You know, the ones who practice “discrimination in every institution of our lives” — except for the NFL, NBA, the entertainment world, pop music, universities, Congress, Presidential cabinet positions, and the Presidency itself. Do you understand now what black people have to deal with? Why America is so awful for them and why white people are so hopelessly, cluelessly delighted to embrace that racism that’s in their DNA? Try as hard as we can — Gol dern it! — we just can’t help it.

As geneticist Obama condescends to explain: racism is “part of our DNA that’s passed on.” That’s even worse news than you thought. Your hope that your kid or grandkid might not be a discriminating, hate-festering white bigot like you? “Deep in my heart, I do believe, that we shall overcome someday.” Not so fast, fast-talker. You clearly are anti-science or don’t understand basic genetics. “We’re not cured of it.” How can you be confident that the great-grandchild percolating in your genes is not the Grand Kleagle or Bull Connor of the coming century?

So, don’t get your hopes up about overcoming “someday.” Something tells me that “the cure” is a long way off. Maybe Obama’s great-granddaughter someday will give us an update on its “progress.”

“Like my great-grandfather President Barack Obama said: ‘Racism, we’re not cured of it.’ Well, I wish I could report that a cure was in sight, but it’s a much more complicated disease than we ever imagined. It’s a long way off. But we’re working on it.”

In the meantime, it’s pedal-to-the-floor with “begging permission to expiate [your] offenses by assiduous labours.”

You are going to be “begging” (apologizing, groveling, kowtowing, bootlicking) until, well, “the cure,” or, more precisely, “till the cows come home.”

Chairman Mao’s Red Guard perfected the ritual of expiation during the Cultural Revolution. They called it the “struggle session.” They supervise the session, you do all the struggling. Believe me: you are going to struggle as you’ve never imagined. It’s not going to be fun. Well, fun for them, yes. For you? Get ready. And, there is no conclusion of a session from which you will emerge as a “better human being.”

If you answer “no,” stupidly thinking, “well, that takes care of it,” you’re in for the surprise of your life. This makes you a moral leper, in today’s parlance, a “denier” — like a Holocaust or climate change “denier.” You are denying basic science — “it’s in our DNA.” Being a denier of your racism is going to put you on the fringe of society. Denying your racism is the twenty-first century equivalent of denying that you were a witch in late seventeenth-century Salem. It’s not going to work out well for you.

So, how to answer the question: “Are you a racist?”