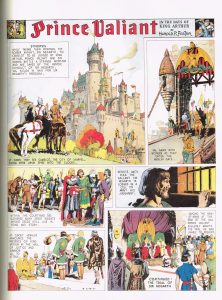 I always enjoyed reading newspaper comics as a kid. Whether I was learning to read or developing my appreciation for surreal humor, I looked forward to each week’s new strips. Some series even sparked my interest in European literature and history. Just as history repeats itself, I have started taking an interest in comic strips again. From brave princes to humorous frogs, the Dissident Right can use comic artwork to promote our history, culture, and identity.

As a young kid, my mom would take me to the local bookstore to find something for me to read. During one holiday season, I remember seeing a large book that caught my interest. The book had an illustrated cover of Leonardo da Vinci’s Mona Lisa, with a cow in the place of the female subject. I asked my mom about the book and she told me that it was a comic strip anthology of Gary Larson’s The Far Side. The artwork immediately caught my interest and I asked if Santa Claus could bring it to me for Christmas. A few weeks later, I woke up to find The Far Side Gallery 3 under the Christmas tree.

The Far Side was a single-panel comic strip series by Gary Larson that ran from 1980 to 1995. The Far Side is best remembered for its anthropomorphic humor that poked fun at life by placing animals in human situations. The series also found humor in depicting awkward moments, improbable events, and impending disasters. The Far Side depicted cows in heaven, lawyers in hell, aliens on vacation, and insurance salesmen in medieval dungeons. I greatly enjoyed the artwork as a kid, but there were a few scenes that I did not fully understand until I got older. Regardless, I have a lot of great childhood memories of reading The Far Side.

My parents decided to let me get a dog when I was seven years old. I got a Scottish Terrier named Bonnie. It was my responsibility to put newspapers down on the garage floor so that Bonnie could go to the bathroom there while I was at school. Before putting the newspapers down, I always read the comic strips. Each day, I looked forward to reading The Far Side and Hägar the Horrible.

Hägar the Horrible is a comic strip created by Dik Browne. The series depicts the humor of daily American life through Viking characters in the Middle Ages. Hägar is the main character and is portrayed as a brutish, red-bearded Viking who lives with his family in a coastal Scandinavian village. Hägar also goes on raids to England and France. Much of the humor revolves around Hägar’s interaction with his family at home and with his fellow Vikings during raids. Hägar’s family consists of his nagging wife Helga, their children Hamlet and Honi, and Snert, Hägar’s loyal dog.

Although not as distinctive as The Far Side, the humor of Hägar the Horrible succeeds at pointing out the differences between men and women, the young and the old, and the wise and the foolish. I started reading Hägar the Horrible after I got into heavy metal and it quickly became my favorite comic strip. I also got a lot of insight from this comic series on female relationships, male friendships, and the simple fact that human beings are not perfect. Browne wrote and illustrated the series from 1973 until his death in 1989. His son, Charles Browne, has continued the series from 1989 to the present day. Both artists have given me countless hours of laughs, entertainment, and wisdom.

Both Hägar the Horrible and The Far Side were featured in the daily newspaper’s comic page in black and white. On Sundays, the newspaper featured a larger selection of new and old comics in color. One of the classic comic strips that appeared on Sunday was Prince Valiant. Prince Valiant was created by Hal Foster in 1937 and the series has told a continuous story over several decades and over 4,000 comic strips. The series mixes mythology and history by having an Arthurian background while incorporating some historical events from the 5th and 6th centuries.

Prince Valiant follows Val as he becomes a Knight of the Round Table and earns the respect of King Arthur, Merlin, and Sir Gawain. When traveling to a Mediterranean island, Val meets Aleta, the love of his life. When Aleta is captured, Val embarks on a quest to save her. Val’s journey takes him throughout Europe as he fights the Goths, the Huns, and the Saxons. In one of the main story arcs, the Byzantine Emperor Justinian orders the abduction of Val’s son and Val travels to the East to rescue him.

Prince Valiant had a different look and narrative style from the other Sunday comic strips. Each scene had detailed characters and backgrounds. The narration was lively and exciting. Every Prince Valiant comic strip felt like a graphic novel. Foster wrote and illustrated the series until 1980. He then nominated John Cullen Murphy to continue the series. Foster died in 1982 and Murphy died in 2004. Both artists have entertained and inspired thousands of comic fans around the world. Prince Valiant also got me interested in learning about Justinian and the Byzantine Empire.

Justinian was the Byzantine Emperor from 527 to 565. Justinian tried to expand his empire by recovering the territories of the defunct Western Roman Empire. One of the generals sent to recover those territories was Belisarius. During these campaigns, a scholar named Procopius traveled with Belisarius and chronicled the events. Procopius compiled these writings in his History of the Wars. At the same time, Procopius was writing another kind of chronicle.

In his Secret History, Procopius reports on the scandals that he could not write about in his official history. Justinian is portrayed as a vain and incompetent leader. Belisarius is depicted as a noble but naïve man, easily manipulated by his wife Antonina. Theodora, Justinian’s wife, is portrayed as a mean, selfish, and promiscuous woman. Procopius even describes an event where Theodora performs nude on stage with a goose. Historians have debated the extent to which these accusations were true or not. Regardless, I enjoyed reading all the scandalous stories and comical anecdotes in Secret History. All thanks to Prince Valiant.

When I moved to Europe after college, I started to notice that the internet was making newspapers obsolete. Comic artists could simply put their comic strips online. This is exactly what Matt Furie did in 2005. Furie created a comic called Boy’s Club and posted it serially on MySpace. One of the characters featured in that series was a frog named Pepe. The catchphrase “feels good man” turned Pepe into a meme that would become popular on hundreds of web sites and message boards. These memes would take on a life of their own. From the Great Meme War of 2016 to the recent Groyper movement, one frog from an online comic strip has given the Dissident Right a mascot with more personas and costumes than Iron Maiden’s Eddie.

Like most aspects of society, the comic book industry has been hijacked by certain groups. These groups have been pushing anti-white propaganda over the last several years. We should not support an industry that openly advocates the replacement of masculine white men. Instead, we should encourage the creation of our own comic strips, comic books, and heroic characters. If most of our hobbies and art mediums are being turned against us, we should put our time and money into creating our own art.

Most of the people that I have met in this community have a lot of bravery and talent. Despite constant censorship, online comic strips from StoneToss and American Zarathustra are combining great art with great messages. Just like them, I encourage you to create the art that you are passionate about. I encourage you to create the next big song, story, or comic strip. If you cannot think of anything to create, I hope you can support the artists in our community. Art builds culture, and culture builds community. Perhaps you or your favorite artist might create the next work of art that encourages white people around the world to stand up for their lands, their rights, and their sovereignty.

We often view history as a cycle that repeats itself. In some ways, comic strips have a cycle of their own. Prince Val has traveled to more places than I have, but his adventures continue every Sunday. Hägar has raided England numerous times, but he still bickers with his wife in the daily comics. Although Larson took a hiatus in 1995, he started creating new comic strips of The Far Side in 2020. I hope the cycle of my life allows me to spend each Sunday reading my favorite comic strips with another Scottish Terrier. By that time, the dog will probably be taking me to the bathroom.

As a wanderer and a dissident, it helps to have a comic view of history and life.