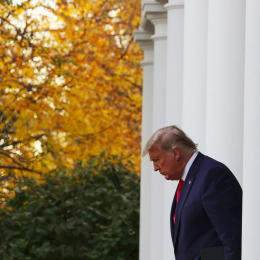 I was unfortunately right about the election — liberal elites stole it from the historic American nation. Through ballot harvesting, Mark Zuckerberg-funded “election administrators,” acceptance of dubious votes, and good old fashioned urban corruption, the Democrats were able to deny Donald Trump a victory on Election Day. Of course, Trump is still fighting the steal in court, but the chances of success look grimmer by the day. Our system is not built to throw out thousands of fraudulent votes ex post facto — especially when they claim it’s racist toward POC.

The main narrative the Right needs to promote after the election is that it was rigged against the historic American nation. The majority of Trump’s 73 million voters believe this and will continue to believe this for the rest of their lives. This memory will delegitimize the system in their minds and persuade them to abandon delusions about American democracy. The other side is not composed of your fellow countrymen you just happen to disagree with — they’re mortal enemies who will strip you of your rights and rig an election against your people. Trump supporters will be our base for years to come, and they’re getting woker by the day. They are also the majority of white people (58%) and the white people we want to save. White liberals aren’t exactly our base, nor are they particularly deserving of salvation.

Trump’s share of the white vote actually increased this year from 57% in 2016.

But some on our side have decided to ignore the 58% in favor of the so-called “5%.” The 5% refers to the apparent number of white men who shifted their votes from Trump to Joe Biden in 2020. This figure likely came from early CNN exit poll data, which now shows Trump’s election margin among white men declining from +31 in 2016 to +23 in 2020. That’s even bigger than 5%, but there’s more than meets the eye here. According to the same exit poll, Trump won 61% of the white male vote this year, a decline of only one percent from 2016. What made the difference is that most white men who voted third party in 2016 cast their ballots for the Democrats this year. Trump didn’t necessarily lose these voters — they were non-Trump voters who became Democrats.

Right-wing Five Percenters (who unintentionally share the same name with a Nation of Islam offshoot popular with rappers) argue these lost white men voted against Trump because he failed to deliver on his campaign promises. They are white working-class guys who want less immigration, trade protection, and an end to foreign wars. A few wignats go as far as to claim these voters are actually white nationalists, which is too ridiculous to even entertain. But the exit polls indicate these whites are affluent suburbanites. The biggest shift among whites by education was college-educated whites moving from +3 for Trump in 2016 to +3 for Biden in 2020. Trump’s advantage among non-college-educated whites slightly declined from +37 to +35. But this change was driven by third party and new voters going for Biden this year. Trump’s share of the white working-class vote actually increased from 66% in 2016 to 67% in 2020. The non-college-educated white, the hero of five percenter arguments, stuck with Trump. It was affluent whites, the primary carriers of the Great Awokening, who moved away from Trump.

While there is no concrete explanation for why these voters went against Trump, the Bill Kristol-backed “Republican Voters Against Trump” offers some clues in their horrible testimonials. The group found many former Republicans who hated Trump because he said or did things the Real Right supports, such as tough immigration enforcement, non-interventionism, and making fun of John McCain. They’re certainly not white nationalists who could no longer tolerate Trump’s fervent Zionism.

One has to conclude that Trump still won those who want to preserve the historic American nation. Despite Trump’s misdeeds and failures, the whites who voted against him cast a ballot against nationalism. There is no data or evidence to support five percenter arguments that the Trump-to-Biden demographic — which is really more of a Gary Johnson-to-Biden and Jill Stein-to-Biden demographic — were motivated by our concerns. The well-off, soccer-watching bugman in Buckhead, Georgia is not our target audience. Our people are Trump voters, whether we like it or not.

Even if five percenter claims were true, which they’re not, it’s not a persuasive narrative. It would glorify white dissenters for choosing to dispossess their people to spite Trump. Biden plans to aggressively implement liberal immigration policies, appoint warmongers, kickstart globalist trade deals, stifle free speech, and end “systemic racism.” There is nothing in his agenda a nationalist should like. The people who will be most negatively affected by a Biden administration are five percenters themselves, especially when the presumptive president-elect directs state power against white nationalists. It’s not clear how you owned MAGApedes when the feds haul you off to prison. The five percenter narrative forces you to stand against 58% of white Americans who voted for nationalism in favor of a demographic that ultimately voted for globalism.

The most bizarre aspect of five percenters is their insistence that there was no corruption in this election. For people who want a revolution to overthrow the system, it’s very strange they want to tell millions of angry Trump voters to trust the system. It’s the definition of counter-productive and it doesn’t lead anyone to our beliefs to praise the DMV ladies who counted the votes. Too many on our side are so ensnared in their own ghetto that they can’t see the bigger picture. Millions of white Americans seeing the system as corrupt is an incredible opportunity. To throw it away is to engage in false and resentful triumphalism — the pinnacle of political stupidity.

There certainly were things Trump could have done to negate the rigging’s impact. He could’ve worked harder to pass a COVID relief plan before the election. This idea was stymied by the GOP establishment and Democrats who knew it would’ve helped Trump. Still, the president could’ve passed it and maybe won some of the third-party voters who went for Biden. He could also have spent less time promoting idiotic outreach like the Black Platinum Plan and more time trying to appeal to white voters.

But this is ultimately nitpicking at the larger issue of the system rigging the election. White Americans who want to put America First stuck with Trump. It was the cucked white Americans who voted against him. We have nothing in common with Gary Johnson or Jill Stein voters and they only make up a fraction of white America.

But we do have a lot in common with Trump voters, who will serve as the base for any and all nationalist movements. It’s smarter to be a 58 percenter than a five percenter.