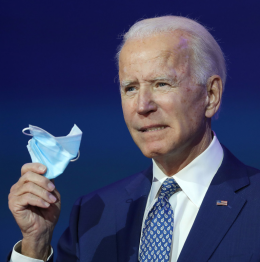 Nicolas Gauthier: Joe Biden has been proclaimed winner of the US presidential election. Donald Trump, who has not conceded defeat, cries fraud and is preparing to engage in a legal battle. What is your analysis?

Alain de Benoist: That’s not what is essential. Everyone now admits that the polls heralding a Democratic surge were, once again, wrong, since Biden, as long as his victory is confirmed and the suspicions of fraud are unfounded, only won by a narrow margin. But this observation is not enough. What the polls had not predicted was that Donald Trump would receive between 7 and 10 million more votes than in 2016. The idea conveyed by the media was that four years ago, “Trumpian demagoguery” had taken advantage of a naïve electorate, which now repented bitterly (hence the predicted wave). The opposite has happened. Not only did those who voted for Trump in 2016 confirm their votes, but millions of former Democrat voters joined them.

Given the considerable voter turnout — which is rare across the Atlantic — the massive, indisputable fact is that half of Americans today are “Trumpians,” in other words that they are now encamped with populist positions. Trump lost a battle, but Trumpism did not lose the war! The traditional two-party system is turned upside down: the Republican electorate is nothing like it once was. And as fierce enmity prevails on both sides, and the old foundations of collective American identity have faded, the United States finds itself divided as it had never been since the Civil War. A Danish daily spoke these days of an “abyss of division, anger, and hatred.”

How to characterize the two camps?

Contrary to what we often imagine, on the Right as on the Left, the division is not fundamentally ethnic. Trump has been accused of being the “white people’s president,” indeed some hoped for that. But if that had been the case, he would surely have lost, and by more votes. Racial tensions are obvious, across the Atlantic as elsewhere, but they do not sum up everything. The living conditions of “minorities” (who are on the way to becoming a majority) improved much more under Donald Trump than under Obama. This explains why Trump improved his tally with them by winning 17% of the vote among blacks, against 13% in 2016, and 35% among Latinos, against 32%. The Black Lives Matter movement, we too often forget, was not born under Donald Trump but in Obama’s second term . . .

If Trumpism is growing stronger, it is not because Trump’s voters are “white supremacists” or because, won over by conspiracy theories, they imagine that Hillary Clinton is devouring living children during dark “pedo-satanic” rituals. What separates the two camps today are totally opposed class affiliations and conceptions of society. We have, on the one hand, the representatives of the Establishment, supported by almost all the media, on the other, Americans attached to their roots, to their own ways of life, and to shared values. The settled people who are from somewhere and the nomads who are from nowhere, ordinary people of the popular and declining middle classes (those Hillary Clinton called “deplorables”) and the “out of touch” [hors sol, literally “above the soil”] lobbies who think the rise of populism is incomprehensible as it is scandalous. It is very similar to what we observe in European countries: a frontal clash between the inhabitants of globalized cities and what we call “peripheral France.” With, in the case of the United States, an important geopolitical detail: the states most favorable to Trump are concentrated in the center of the country; they belong to continental America; while the strongholds of Joe Biden belong to maritime America: the major metropolises of the east coast and California. Land and Sea, always.

Joe Biden has proclaimed his desire to be a “president who unites.” Is he likely to succeed?

I do not think so. Let’s move on to this character’s petty mediocrity. That the Democrats have chosen as their champion a senile politician, expert in gaffes and thoroughly corrupt, already says a lot about the crisis facing the Democratic Party, which, moreover, has just lost seats in the House of Representatives and may not win the Senate. Biden’s camp is deeply disunited, and its room to maneuver will be very narrow. Donald Trump was, for the Democrats, a providential scapegoat: it was only hatred of Trump (the same hatred shown by 90% of the European media) that brought them together. If Trump is no longer there, all of their differences will come to light, as the people’s discontent continues to rumble. And if — as is quite possible, perhaps likely — Kamala Harris, representative of the Left-wing of the party, succeeds Biden during their term, the gulf between the two Americas will widen even more. Until what point? In a country where more than 350 million firearms (more than there are people) circulate freely, perhaps we should fear the worst.