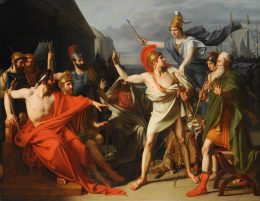 Michael Drolling, The Wrath of Achilles, 1819.

Thanksgiving has always been one of my favorite holidays. Along with eating turkey and pumpkin pie, it is a day where I reflect on all the things that I am thankful for in my life. As our governments take advantage of the COVID lockdowns to impose draconian measures and the Great Reset, I found myself feeling more angry than thankful this year. While many of the events of 2020 have led to anger and frustration, re-reading the Iliad has given me a positive outlook on all the opportunities the Dissident Right can look forward to this Thanksgiving.

I always looked forward to Thanksgiving as a kid. My family would drive two hours to visit our relatives and have Thanksgiving dinner with them. Our relatives were more liberal than my parents, so dinner discussions often became heated. Some people dread such situations, but I loved it. I enjoyed listening to my family discuss all the controversial issues on politics, religion, and race. Unfortunately, the heated debates ended when the yearly football game on TV started. Since I hated sports, I often watched pre-recorded episodes of The Simpsons in another room. From “Homer’s Odyssey” to “Bart vs. Thanksgiving,” I watched all the classic holiday episodes that have now become a tradition for many TV channels to air on Thanksgiving.

Although I spent the last few years in Eastern Europe, I was fortunate enough to spend last Thanksgiving with my mom. I decided to take my mom to a local brewery that was offering a Thanksgiving buffet. Along with a sampler flight of their beers, the brewery offered a great variety of meats and a wide selection of desserts. Lucky for me, the television near our table was showing a marathon of The Simpsons. Although I had a great meal, I was most thankful for the time I got to spend with my mom. I was also thankful for the fact that there was a restaurant open on Thanksgiving so people like myself could enjoy Thanksgiving with their families without having to cook.

That Thanksgiving seems like it existed a lifetime ago in a world that no longer exists. As much as the anti-white propaganda has increased in the last several years, 2019 was the last period of normalcy before the chaotic events of 2020. From the worldwide COVID lockdowns, the BLM riots, and the overt voter fraud of the US presidential election, 2020 has become the most historic year in my life for all the wrong reasons. And while the COVID mortality rates are becoming as untrustworthy as the election results, our governments are using the lockdowns to impose various restrictions that one would expect to find in a dystopian sci-fi film.

I admit that I was wrong about the COVID pandemic. Seeing the initial footage of hospital patients dying in various countries around the world made me panic. I left Europe and returned to the US to avoid being stuck in a potential outbreak area. I originally assumed that 20 percent of the world’s population would develop complications from this virus and that five percent of the population would die. I assumed that this would flood the hospitals and cause chaos worldwide. Naturally, I am thankful that these estimations were wrong and that the pandemic was much less severe than originally predicted.

By the summer of 2020, I started to realize that the fatality rate of the pandemic was much lower than estimated and that most of the people who developed complications were either elderly or had pre-existing health issues. By the beginning of autumn, I started to realize that only white conservatives were expected to follow the rules of the COVID lockdowns. Furthermore, despite the decrease in COVID-related deaths, lockdowns and travel restrictions have been extended. Thousands of family-owned restaurants and businesses have had to permanently close and millions of people have had their lives ruined. The brewery that I took my mother to for Thanksgiving has closed and it is unknown if it will reopen in the future. Instead of ending the lockdowns so family-owned businesses can reopen, the elites have been openly promoting the Great Reset.

The Great Reset is a concept that puts a new name over the same anti-white propaganda that has been increasing over the last few years. Featured in a recent Time magazine article by Klaus Schwab, the Great Reset aims to reset the world’s economy and implement “stakeholder capitalism.” In contrast to shareholder capitalism, where a corporation’s primary goal is to maximize profits for its shareholders, stakeholder capitalism is the naïve idea that corporations can act as caretakers of society to eliminate social, economic, and political problems. The only thing they want to eliminate is the ability of white people to stand up for themselves. With the Great Reset, Schwab reminds me of Mr. Burns and Homer Simpson reminds me of the average white man. Unlike The Simpsons, our problems will not be resolved by the end of the episode.

I discovered early on as a kid that Homer Simpson shares his first name with the presumed author of the Iliad and the Odyssey. It is unknown whether “Homer” refers to a lineage of poets who put the Greek legends to lyrical verse or to a particular poet who compiled the Greek legends into a long poem. While there are still different theories on the subject, it is generally accepted that an 8th-century poet may have compiled the legends surrounding the 10-year Greek siege of Troy and created the 15,000 line poem that we know today as the Iliad. The Iliad focuses on the anger and wrath of Achilles, the divine warrior of the Greeks, who leaves the siege after being disrespected by Agamemnon. As the events unfold, Achilles realizes that his destiny faces two potential fates. If he decides to stay and fight for the Greeks, he will achieve eternal glory but will never return home. If he leaves and goes back home, he will forfeit his glory but will live a long and happy life. As the story progresses, the tension builds as we realize how his anger and wrath lead to the decisions that define his fate for him.

The ongoing events of 2020 have made me feel the anger, rage, and wrath of Achilles. I felt the anger of Achilles as terrorist groups like Antifa and BLM burned our cities and destroyed our monuments. I felt the rage of Achilles when the Democratic Party, social media companies, and the mainstream media all worked together to cover up the voter fraud of the US presidential election. I felt the wrath of Achilles as our governments used the COVID lockdowns to implement draconian measures on white people. But unlike Achilles, there will be no home to return to that will be free of lockdowns, non-white crime, or third-world immigration. Our path leads to only one fate.

This Thanksgiving, let us start our own reset. I think we should support the protests against these extended lockdowns and restrictions. We should support the restaurants and businesses that attempt to reopen despite the fines or penalties. We must continue speaking out against election fraud, demographic replacement, and the Great Reset. When discussing these topics, be prepared to be labeled by our opponents as a conspiracy theorist. Like a video game that freezes, this mentality needs a reset.

The only conspiracy theories being actively promoted in our society are the anti-white theories of institutional racism, white privilege, and white supremacy. Only white countries are expected to be diverse, tolerant, inclusive, and multicultural. Only white people are expected to feel shame for their heritage, history, and culture. Perhaps this upcoming holiday could also use a reset.

Thanksgiving should become a holiday where white people celebrate their history, culture, and identity. White people should be thankful for having their own lands, resources, and sovereignty. White people should honor the individuals that risked their lives and livelihood to secure the existence of our people and a future for white children. As white people become minorities in their own countries and realize that their governments have turned against them, we will have the answers and the solutions that they will be looking for. We can turn each Black Friday into a white awakening day. These are the things that we can look forward to at each Thanksgiving in the future.

Despite all the craziness of 2020, I have a lot to be thankful for this Thanksgiving. I am thankful for Homer and all the poets, translators, and publishers that have kept the Iliad and all the great literature of Western civilization alive. I am thankful for the opportunity to write for Counter-Currents, the university of the Dissident Right. I am also thankful for all the content creators in our community and the people that support their work. Most importantly, I am thankful for my mom for putting up with my stubbornness, which I inherited from my father. My father may have been stubborn, but he always reminded me to channel my anger and frustration into something positive. I hope the Dissident Right can channel the wrath of Achilles into creating more books, music, and art. While I enjoyed watching The Simpsons as a kid, I hope my future children will be watching Murdoch Murdoch episodes each Thanksgiving.

That would be a great Thanksgiving reset.