The Tangled Web of Life 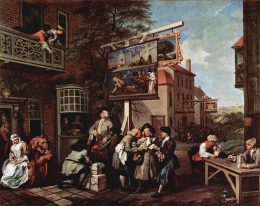 William Hogarth, Canvassing for Votes, from The Humours of an Election, 1755.

Since the last US presidential election, my life has been a tangled web of travels and adventures. I was fortunate enough to experience Trump’s historic election night in 2016 while living in a small town in Texas. This year, I spent the election night in a small British town near Tamworth Castle. Like everyone else, I stayed up late both nights watching the election results and hoping that Trump would win. Although these elections have led to two different outcomes, the widespread voter fraud and corruption of the 2020 election might inadvertently give the Dissident Right some opportunities to promote our ideas to disenfranchised Trump supporters around the world.

I have very fond memories of the election night of 2016. After a work contract ended, I moved into my girlfriend’s apartment in a small town in central Texas. Across from the apartment was a cemetery that included over 20 graves of Confederate soldiers. On election day, I put on my red Trump shirt and walked my dog around the cemetery. Almost every car that drove by honked and waved at us in support of Trump. After paying my respects to the fallen Confederate soldiers, we walked down the main boulevard of the town and I continued getting positive compliments from fellow Trump supporters.

That evening, my girlfriend and I watched the election results on YouTube while enjoying a sampler pack from a local Texas brewery. My girlfriend came from a liberal family and hated the fact that I was a die-hard Trump supporter. Nevertheless, we were both curious to see how the night would play out. My girlfriend could not believe that Trump was winning various states that were guaranteed for Hillary Clinton. With a mixture of frustration and tiredness, my girlfriend fell asleep around 11 PM. I stayed up and became increasingly excited as Trump’s electoral college total crept closer to 270. Around three in the morning, I ran to the bedroom and woke my girlfriend up to tell her that Trump had just won the election. While it may have seemed like a nightmare to my girlfriend, my dreams of a Trump victory had finally come true.

Four years later, I found myself visiting fellow dissidents and content creators in Europe. For fears of rioting, looting, and protests, I decided not to travel through any major cities on the night of the election. Therefore, I made a stop in Tamworth, England to meet a friend for dinner before watching the election results. Since I arrived before dinner, I decided to take a walk around the city center. It was there that I discovered Tamworth Castle.

Tamworth became the main residence of Offa, one of the most powerful Mercian kings of the 8th century. In 781, Offa built a fortification in Tamworth along the River Tame. The fortification and the town were destroyed by a Viking raid in 874. Æthelflæd, the eldest daughter of Alfred the Great, started rebuilding the town with a new fortification in 913. The Vikings destroyed the fortification again after a long siege in 943. The area was eventually given to Robert Despenser, one of the stewards of William the Conqueror. Despenser built a motte-and-bailey castle on top of the previous fortifications in the late 11th century. Despite recent renovations, much of the original structure of Despenser’s castle still survives today.

Just as I arrived at the castle, the museum office for the castle was closing. The staff allowed me to quickly walk around the castle before closing the gate. They invited me back during opening hours the next day for a tour inside the castle. I thanked them for their time and eventually met my friend for dinner. Since it was election night, we decided to get into the spirit of the election by going to an American-themed restaurant. Over nachos, hamburgers, and a few shots of Jack Daniel’s, we talked about how each of us spent election night in 2016. We both had similar stories of staying up late and getting excited as Trump kept winning state after state. After dessert, we went back to his place to watch the election results.

The election night started as predicted with Trump winning most of the Midwest and Joe Biden winning the liberal blue states. What caught my attention early on was just how well Trump was polling in most of the key battleground states. He was even doing better in unexpected places like Virginia. Nevertheless, I kept reading reports of Trump ballots being destroyed or discovered in garbage bins. A controversy regarding sharpie pens occurred in Arizona. I even started to see incidents at voting sites where Republican election monitors were being prevented from overseeing the vote counts. One such example was the video footage of windows being covered up so people could not see the absentee ballots being counted in Detroit, Michigan.

Things continued to get stranger. Late into the night, the counts suddenly stopped. With a feeling of uneasiness and uncertainty, I decided to go to sleep and continue following the results in the morning. When I woke up, I heard that thousands of mail-in ballots had appeared in several swing states and nearly 100 percent of them were for Biden. They also appeared in convenient amounts that kept putting Biden ahead of Trump. Most of these ballots did not have any votes for the senatorial and gubernatorial elections. Alternative news sites continued to show evidence of dead people voting along with voter turnouts of over 110 percent in various states. This was blatant voter fraud and election corruption.

Despite all the election shenanigans, Trump gained over six million more votes in this election than in 2016. While I have been critical of Trump at various times over the last four years, he will always be the first president in my lifetime that addressed some of the issues that impacted white people in America. I knew he could not change the demographic problems of America, but his victory would have been another symbolic victory against globalism, replacement migration, and the endless amount of anti-white propaganda that we endure every day. For all his faults, I will always have a soft spot in my heart for Trump and the memorable experiences I had at his campaign rallies.

I give Trump credit for not conceding immediately. I wanted him to fight this illegitimate election and to stand up for the millions of white Americans that voted for him. Yet I also realize that Trump never had the infrastructure to completely remove the deep-state elites and the bureaucrats that have been opposing him since 2016. Trump has been attacked by numerous groups on numerous fronts every day for the past four years. As much as Trump may have wanted to contest this illegitimate election, perhaps he has already fought them with everything he has left in him. Just like Tamworth Castle, even the strongest defenses break down over time.

I returned to Tamworth Castle to kill some time before taking the train to the airport. I took a tour of the castle and found out that the castle was owned by the Marmion family from 1100 to 1294. The Marmion name seemed familiar to me, and then I remembered that Walter Scott wrote an epic poem called Marmion: A Tale of Flodden Field. Scott took the name from the Marmion barons and made a fictional descendent of theirs the main antagonist of the poem. The story takes place in the 16th century where Lord Marmion frames Sir Ralph De Wilton for treason in order to marry Clara de Clare (De Wilton’s fiancée). By navigating through a tangled web of lies and deception, De Wilton eventually clears his name and marries Clare. While this poem was popular when it was released in 1808, it has gained modern popularity for being the actual source of the quote mistakenly attributed to Macbeth: “What a tangled web we weave, when we practice to deceive.”

Let us not deceive ourselves. We all know that the 2020 presidential election was an illegitimate election where an anti-white coalition of the media, the tech corporations, and the Democratic Party took part in voter fraud and corruption. The Democratic Party (with the help of various governmental agencies) implemented widespread voter fraud. The tech corporations censored various accounts that were reporting on this corruption. The mainstream media ignored the corruption and prematurely declared Biden the winner of the election. These groups are now working together to label and portray anyone talking about the voter fraud as a conspiracy theorist. Yet the only conspiracy is how these groups stole the election from Trump.

Sometimes the most tangled webs of life offer the clearest paths to freedom. Instead of counting votes, count the number of countries in the world. That number is the least amount of times that diversity, tolerance, and multiculturalism have all failed. Democracy in Western civilization has become a racial headcount where the ruling elites have been importing the entire third world to replace us for votes and cheap labor. If white people cannot vote at the ballot, then we can vote with our actions by unifying and organizing as a racial group to stand up for our own lands, resources, and sovereignty. My vote goes to embracing white identity politics.

White Trump supporters are feeling betrayed, angry, and hopeless. Now is the time to spread our message to them. Let them know that while both parties have abandoned them, the Dissident Right exists to represent them. Let them know that while liberalism has made white people the villains of history, our worldview portrays white people as the heroes of western civilization. While they are feeling hopeless, let them know that white identity politics can give them hope for the future. If we are cursed to live in interesting times, let us turn this crisis into an opportunity to red-pill every white Trump supporter we encounter. Let their tangled webs of fraud and corruption be the pathway to securing the existence of our people and a future for white children.

During the train ride to the airport, I thought about my life since the election night of 2016. From visiting confederate statues in Texas to exploring a castle owned by the barons of Tamworth, I am thankful for all the amazing experiences I have had on my red-pill journey. I also wondered what those soldiers and barons would have done if they lived during the election of 2020. While we are all products of our time, I think that they would have wanted their descendants to fight for their homelands, their heritage, and their honor. Although I never know where my journey will take me next, I will continue my adventures to help their descendants achieve these goals before the next election night.

As a wanderer and a dissident, such is the tangled web of life.