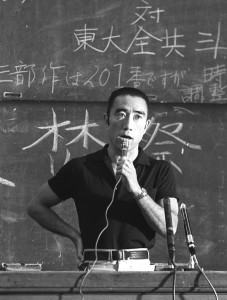 Recently, an English-subtitled film called Mishima: The Last Debate was screened at the Busan International Film Festival. It is a documentary composed of archival footage, previously thought lost, of the famous debate between Mishima and members of the Left-wing student group Zenkyoto. It appears that the film is still unavailable for streaming in English, nor are any theatrical releases planned. If you know of any way to watch this film, please comment below.

In 2013, Naoki Inose’s massive Persona: A Biography of Yukio Mishima appeared in English. This exhaustively researched volume will probably stand for a long time as the definitive work on Mishima. It contains too much information for the casual reader, but for Mishima fans like me, it is essential reading, filled with detailed and tantalizing accounts of Mishima’s many untranslated writings, fiction, and non-fiction, including his many political statements. For the first time, it is possible for people who do not speak Japanese to gain a clear and detailed picture of Mishima’s politics.

« Meet The Whites Who Voted Against Trump

» Video of the Day: Poetry With a Splash of Blood