What Joe Biden’s Internet Policy Means for the Dissident Right 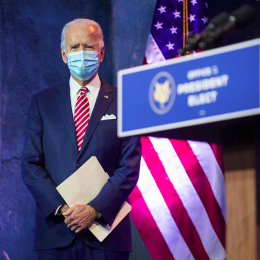 What are the implications of Joe Biden’s plans for internet censorship and a federal task force meant to combat hate speech? First, I will speak of the vulnerabilities in popular “far-right” organizations that could be exploited by this development, then I will talk about what I believe will happen if these plans actually go into effect.

Recently, the Patriot Front, a prominent post-Charlottesville Dissident Right organization, had its chat logs released to the public (you can see them on torchantifa.org). It was trending on Twitter at the time, and the press picked the story up and spread some of the content far and wide.

How did this happen? An infiltrator joined the chatroom. Patriot Front never would have been able to prevent this. If they had an extremely secure platform, someone could have joined and read their logs there. If they had a rigorous test to join, someone could simply lie on it, and so on and so forth.

Membership organizations will always have this problem, but for the Dissident Right, it is particularly bad. The media loves to satisfy the liberal who is scared to death of these organizations, and there are many people who attempt to infiltrate these groups as they are politically opposed to a vast majority of the population. The Dissident Righter probably knows all of this, but what he may not know is that if Democrats regain control of the government, which in this uncertain time could very well happen, they have publicly made it part of their agenda to “Establish a new Task Force on Online Harassment and Abuse to focus on the connection between mass shootings, online harassment, extremism, and violence against women.”

This could spell the end of the membership organization if Joe Biden wins. If they already have issues with non-professional Antifa infiltrators, imagine what issues they will have with professionally trained government agents trying to hamper them.

In the 20th century, it was a popular strategy to wear the same uniform and march in formation. It was a good idea to act militantly and to organize like a regiment. However, in the modern world, we cannot act this way anymore. Even if Biden loses, the media and anti-dissident organizations will always try to do what they did to the Patriot Front. This is not the 1900s anymore.

The solution is not obvious. I have seen many people claim that the organizations described above are the only way forward. What they do not realize is that a movement does not need to be an organization. Black Lives Matter is not an organization in the same way the Patriot Front is. You cannot become a “member” of BLM, yet we’ve seen how effective they can be. The mob simply listens to BLM leaders and hyper-Left-wing demagogues for what to do and think.

The Right can do this as well. If BLM had a Discord server or a huge number of official members, it could never function. Its plans would be foiled by anyone attempting to destroy them. Instead, they make their plans public, and they are listened to.

Our demagogues are out there. For example, when Nick Fuentes told his followers to go on stage and ask Charlie Kirk questions, people did it. It worked, and I’m sure it was a red-pilling moment for many. Kirk was completely embarrassed, and the media could do nothing but cry about Fuentes himself, who was not at risk of being fired, as he runs his own show — in which he occasionally directs his followers to wreak havoc on those he would like to attack.

If one person in Fuentes’ movement (known as the Groypers, as I ought to mention) is compromised, nothing will change. If one person in the Patriot Front is, the whole organization is at risk. This makes the Groypers immensely powerful. Nobody can track them down and cancel them. Nobody can destroy them from the inside, because there is no inside; just a bunch of Zoomers with frog profile pictures and one man who directs them to success. Other organizations do not enjoy this incredible advantage.

So, let’s say you’re not concerned with this new official federal task force meant to censor and investigate you. What should you do? Well, that is not my choice, but I would watch out for this. It is well-known that the Left is not our friend. I would try my best to keep personal information off of the internet, and lie low if my personal information is already public.

So, what else does this mean for the average person who is not a public figure or a member of one of these organizations or movements? Republicans and nationalists of all stripes complain about censorship by major platforms with a monopoly on internet discourse, but we should consider that this is only going to get worse when a government program backs it up.

I understand in many ways that Donald Trump was disappointing. But if you value your ideals, you ought to consider the risks posed by a Joe Biden presidency. Your free speech would be in peril — not just in the terms of service of some social media platform, but in the eyes of the law and the government. We need to do what we can to prevent a Joe Biden presidency — both for this and many other reasons.