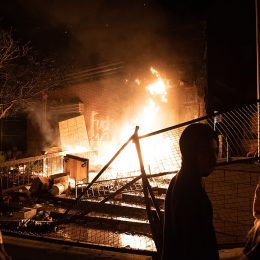 With all the uncertainty surrounding the 2020 election, I’m reminded of the Randy Newman song “I Want You to Hurt Like I Do.” It’s a slow, depressing waltz about a self-centered person who’s cruel to others for no reason. And when asked why, he repeats the song title for an explanation. Towards the end, he laments how

That anger, that anxiety, that disgust we’re all feeling now that the far Left is attempting to hijack the 2020 election the way it hijacked the Democratic Party — is exactly what most liberals and Leftists were feeling in 2016 when Trump overcame the odds to win the presidency. They want us to hurt like they do, you see.

They who refused to concede 2016 now condemn Trump for (so far) not conceding in 2020. They who spent three fruitless years trying to prove that Trump cheated in 2016 now scoff at Trump for claiming the same thing about the Democrats. The fact that Trump indeed has the votes to win a second term and that his evidence for Democrat cheating is very real doesn’t matter to the Left. What matters is how they all feel. They were miserable for four years under the Trump presidency, and now relish the opportunity to pass that misery back to the Right.

The level of petty here is off the charts.

They won’t because they can’t. The misery of the Left is counter-factual. It’s essentially a paranoid, Bolshevik reaction to enthusiastic white populism. Trump, for all his faults, campaigned his ass off in 2020 and should be commended for that. And the hundreds of thousands of his mostly white supporters who showed up at his rallies terrify the Left. They see it as a return to Nazi Germany, the last time large numbers of whites enthusiastically supported a leader who acted in their racial interests.

Of course, this Leftist hysteria is about perception and not reality. Since both Hitler and Trump enjoyed vaguely similar kinds of support from their bases, Leftists believe that the two must share an agenda. The fact that Donald Trump has never shown admiration for Hitler in his long public career means nothing. The fact that Donald Trump is a philo-Semitic Zionist with Jewish family members means nothing. The fact that after four years of a Trump presidency there was no fascism, there was no totalitarianism, and no racist crackdowns of the Left or of non-whites also means nothing. If Trump were the fascist they claim him to be, then why would he bother to run for re-election?

(I have to kick myself every time I raise logical objections to Leftist rhetoric — logic just doesn’t matter with these people.)

What does matter is that Leftists suffer emotionally under Trump. And now they are planning to make the Right suffer under a Biden-Harris presidency. Only, the suffering they plan for the Right will be very real. Real, as in having to deal with a government that supports communism, open borders, defunded police, and anti-white terrorist groups such as Antifa and Black Lives Matter. If the Left gets its way, they will intimidate white conservatives into compliance, and use sites such as this one to track down any whites who still possess backbones in order to smear them, de-platform them, ruin them financially, and, if necessary, imprison them. This was the Leftist playbook after the October Revolution in 1917 and given the obvious admiration that Antifa and Black Lives Matter have for Marxism and Soviet Communism, there’s no reason to believe that that playbook has changed at all in a century.

The crux of the matter is that the Left is in thrall of an egalitarian ideology that does not jibe with reality. And since most Leftists tend to be dogmatic in their thinking, they would rather attempt to change reality to suit their dogma than the other way around. This takes much effort and invariably drives them into rivers of grief since, to make a Christian analogy here, Reality is formed by God and ideology by man. And the Former is much greater than the latter. When Man pretends to be God, his arrogance gets him punished. And that punishment is often exquisitely cruel.

In the mind of the Left, Donald Trump represents a reassertion of Reality over ideology, of Truth over dogma. And to some extent, this is correct. Trump remembered 9/11 and noticed how Muslims are terrorizing white Europeans and called for a reasonable ban on Muslim immigration. Trump noticed how large proportions of illegal immigrants from Mexico and South America are criminals and reasonably called for a wall to keep such people out of the United States. Trump noticed how many protestors at the Unite the Right rally in Charlottesville were not Nazis and quite reasonably praised those who were there only to preserve Southern heritage. Most recently, he noticed that COVID-19 was originating in China and quite reasonably called for a travel ban on China.

Leftists were insulted by all of this not because it didn’t make sense but because it repudiated their precious egalitarian ideology. And they reacted by labeling Trump an Islamophobic, racist, anti-Semitic, xenophobe. These are the kinds of smears one reserves for heretics, not criminals. Trump was only acting in response to facts on the ground, but because he did not bow to Anti-Fact, as most Leftists do, he must be destroyed and his supporters must suffer as a result.

I understand that it’s not as bad as all the Right now. The GOP kept the Senate and gained seats in the House. White populism is as strong as ever. Trump once again showed how the mainstream media lies at every turn. He forced the tech oligarchs to force their hands through blatant censorship. He also forced the Left to do the very thing the Left has constantly accused him of doing — cheating in an election. If Joe Biden manages to wrest control of the White House and install radical Leftists in high positions of power, the amount of faith the mainstream Right has for the American system will plummet to dissident levels. And this will be a good thing, since this attitude shift will be the first step towards a solution to the internecine and increasingly violent Left-Right divide which is plaguing this country: secession, partition, or, God help us, civil war. And the sooner the better.

Win or lose, if Donald Trump has done anything, he has demonstrated how counter-factual dogma has caused the Left to want to make the Right hurt like they do.

» Twin Peaks: Fire Walk with Me