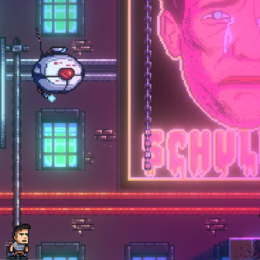 Earlier this year what is billed as the “first patriotic video game” was released. Heimat Defender: Rebellion [2] was developed by Kvltgames, part of an Austria-based patriotic art collective called Kvltgang [3]. Sometimes politics and art do not mix well, with some of the most politically aware lacking artistic skills and some of the most artistically talented having only superficial politicial thoughts, but Heimat Defender shows that this need not always be the case.

Heimat Defender is a pixelated side-scrolling game in the style of late 80s and early 90s titles like Mega Man, Commander Keen, or Jazz Jackrabbit. The player fights as part of an underground resistance against the dominant Globohomo Corp. (Since this is a family-friendly game, this is said to mean “global homogenization” rather than “global homosexuality.”) The corporation has performed procedures on most Europeans so that their individuality is erased and replaced with mindless obedience to the corporation’s dictates. Most of them volunteer themselves for this treatment, which is done in an “NPC factory.” People thus transformed take on a very homogeneous look — that of the grey-faced NPC of meme fame, with a few variations in costume. Some are Antifa and engage in typical Antifa activities such as covering their faces and throwing Molotov cocktails, while others have pussy hats or blue hair. Many come out of an NPC dispenser one after the other to further emphasize their homogeneity.

Martin Sellner and his wife model hats by Outdoor Illner. Unfortunately, this is not included in the game.

The player first takes the role of Alex Malenki [5], a YouTuber and identitarian activist, and switches to three other characters throughout the game. These include Outdoor Illner [6], a similar YouTube personality and survivalist, as well as Austrian identitarian leader Martin Sellner [7] and German dissident writer and publisher Götz Kubitschek [8]. Each has distinct abilities and the levels are designed with these in mind. Illner, for example, can climb walls and use his hat as a hang glider, and these abilities are necessary at some points to advance through the level. Sellner has the ability to throw an orb and teleport to wherever the orb lands, and this is necessary to pass otherwise deadly barriers.

The varying heroes mean that the game’s 15 levels never become boring in terms of gameplay, and neither do its music and visual art. Both the graphics and the music are influenced by synthwave [9], a 21st-century genre of electronic music that harkens back to the 1980s and shares its name with an associated visual aesthetic. There is also humor throughout the game, including weapons such as the “tactical spork,” memes such as the Coomer, and parodies of various political figures. One of the few problems with the game is that it is impossible to look down, so that the player at times cannot see where he is going. 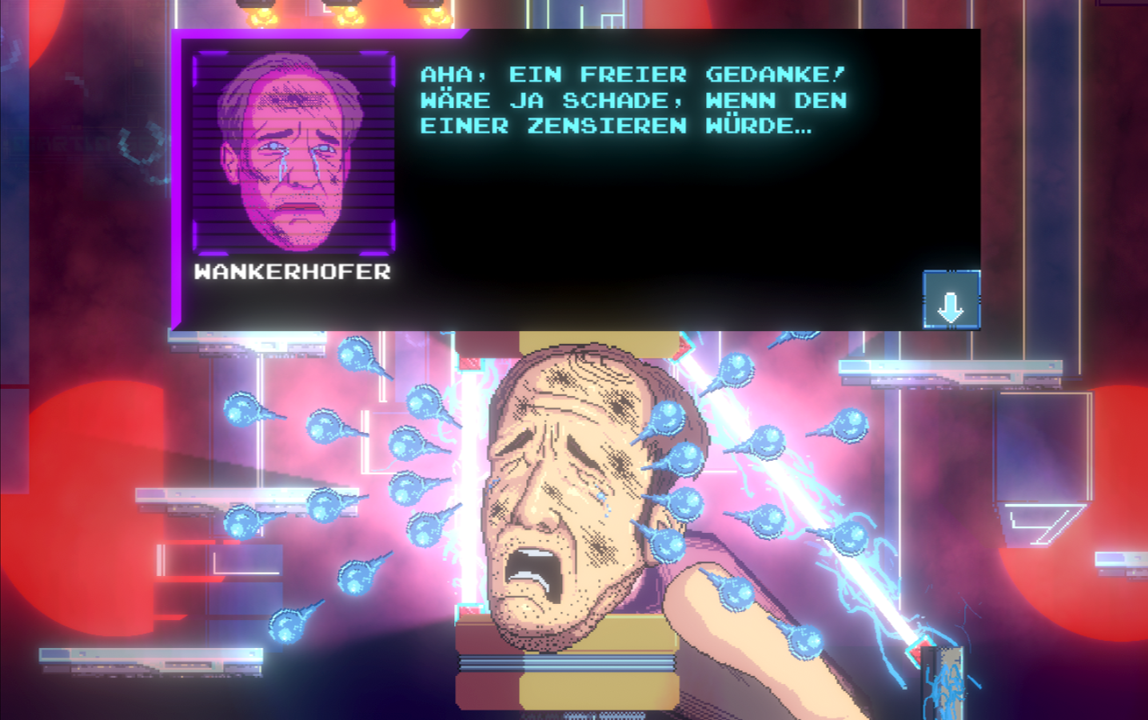 Wankerhofer, the director of guilt for the NPCs.

The game is unfortunately available only in German at the moment, although a translation into English is in progress. Luckily, the gameplay is simple enough that monolingual English-speaking players should be able to get through it, although they will miss the plot exposition. They will only need to guess a few words to navigate the menu — “fortsetzen” means “continue” and “beenden” means “quit” — although they may need to look up words if they want to change the controls.

The developers are explicitly presenting a political message, and not only in their choice of heroes. We learn about halfway through the game that Globohomo directs the NPCs by controlling their feelings of guilt, and that even one of the corporate leaders himself has developed pathological guilt. In one battle, a character called Wankerhofer strikes himself with a whip and the player must dodge both his whip and his weaponized weeping. Misplaced guilt is exploited to suppress European identity, and combating it is an explicit goal of identitarian activists.

There are even more explicit references to Dissident Right-wing thinking in the game in the form of what are known as kaplaken. This is a word you will not find in German dictionaries, but Götz Kubitschek’s publishing house Antaios [11] has released a series of small volumes under this name. As the publisher explains, the term refers to the monetary bonus which the captain of a ship might receive after a successful voyage, and the books are intended as a “spiritual supplement for independent thinkers.” Each time the player collects one of these volumes, mostly at hidden locations in the game, he is given a brief description of real-world writings from this series, such as Why Conservatives Always Lose [12] by Alex Kurtagic.

Most surprisingly, there are messages between levels encouraging the player not simply to accept certain views but to get active in the real world. The developers even encourage “less tweeting, more doing.” This is done without the tasteless or broken-record style one might expect from political exhortations in the current year. 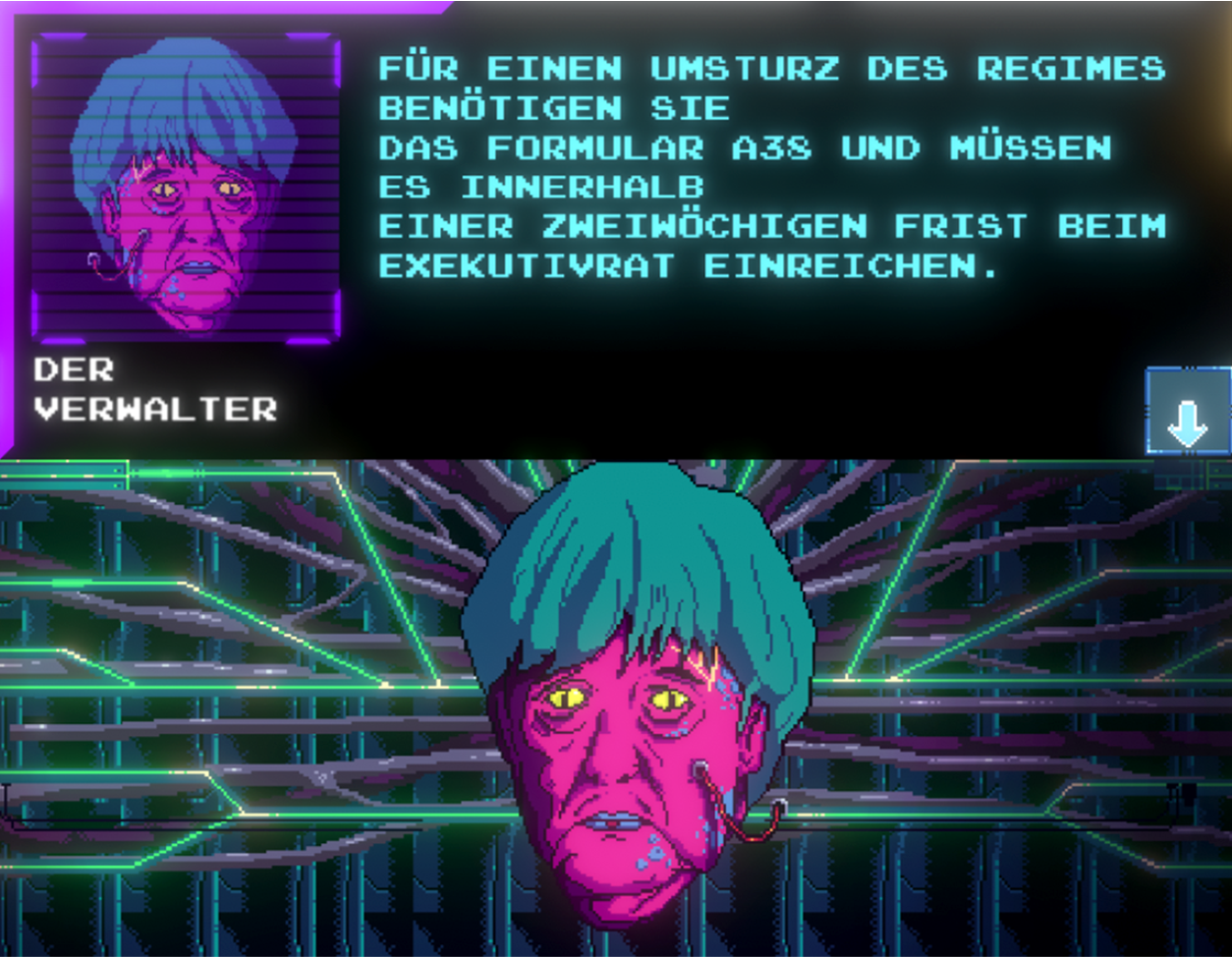 Angela Merkel complains that you have not turned in the proper form to overthrow the government.

At the end of the game, the character faces a dramatized version of Angela Merkel, who is known as “der Verwalter” (the administrator). To emphasize her inhuman bureaucratic thinking, upon being defeated in battle, she complains that “overthrowing the government requires form A38, which must be submitted to the executive council within a two-week period.”

Contrary to mainstream media claims that the game encourages hatred against minorities, none of the enemies the player combats have any apparent ethnic identity, with the arguable exception of Wankerhofer, who suffers from white guilt. Indeed, this is to be expected, as the erasure of distinct ethnic identities in favor of a global monoculture is a key identitarian complaint. The final target for destruction is not a covetous Jew [14], but rather a set of “reality system stabilizers,” devices that help the Globohomo Corp. control the NPCs.

This is not a final victory, though; space is left for a sequel. After the local NPCs are deprived of their transmissions from Globohomo, they are only briefly helpless; soon they are reanimated with a strange glow in their eyes. We then see a character called Commander Kurz, who looks like George Soros, explain that this was not the only set of stabilizers; he is activating the backups, and he still intends to crush the resistance.

The lead developer [15] has suggested that the game’s denunciation by the mainstream press was motivated by fear of a “well-made dissident game.” Linda Schlegel, a Ph.D. researcher on online “radicalization” at Goethe University was quoted by Vice [16] as complaining that the game was “problematic, because it’s not an immediately obvious display of ideology,” along with being “fun” and “cool-looking.” She was afraid that the game would not only be attractive to current identitarians but also lead the politically innocent astray.

Under pressure, the game was removed [17] from the online game seller Steam [18] only a week after it was released, despite the platform never before removing a game for political reasons. The establishment is scared of this game, and rightly so. It is easy to dismiss edgy entertainment motivated by negativity. Few people would play a Holocaust simulator, and its creators would easily be branded as hateful lunatics. It is not so easy to dismiss something genuinely uplifting. Heimat Defender not only calls for action but demonstrates a positive, creative and rebellious spirit in the face of dystopia. This is what our opponents most fear and what we need most.