He Can Only Lose If It’s Stolen 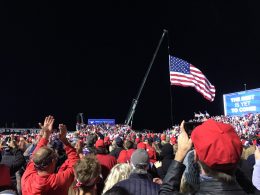 The election is finally upon us. The mainstream media repeatedly tells us it will be a landslide for Joe Biden. The MAGAsphere insists it will be a red wave.

It’s very likely the blowout predictions will be wrong and a close election will be the result. We may not know the winner for several days. If Donald Trump wins, it’s a victory for nationalism and the Dissident Right. If he loses, it’s the opposite. That’s why the Right must insist a loss is the result of a stolen election — and there’s plenty of evidence to support this meme.

It’s essential for the Right to fight over the election narrative, whatever the results. Cuckservatives and liberals both relish the idea of blaming a Trump loss on the president’s implicit white nationalism. You can see the campaign consultants shouting now: “The only future for the GOP is to embrace diversity, racial justice, and mass immigration. White America is done.” This happened the last time Republicans lost a presidential election in 2012, with the party producing an odious “autopsy report” that recommended amnesty and “inclusive language” for the party to survive.

This would be silly to do because the election centers on the coronavirus and not immigration. Immigration, unfortunately, is not a central issue of this campaign. In fact, the areas where Trump most differed from the party establishment (immigration, foreign policy, trade) haven’t garnered much attention. If Trump loses, the most obvious culprit would be COVID’s devastation. Bad economies and social turmoil usually hurt incumbents.

If Trump wins, the cuckservatives and liberals will attribute the win to everything but his semi-nationalist agenda. That narrative is easier to debunk than the ones elevated after a defeat.

But we shouldn’t just shrug our shoulders and blame a loss all on COVID. That explanation fails to account for how our present system works against the historic American people. The powers that be–ranging from the FBI to the mainstream media to Facebook — colluded to stop Trump from winning the election. For years, establishment politicians — with the full support of corporate America — flooded this country with foreigners to stifle the founding stock’s resistance. People who have no love for the country, its history, or its traditions now decide who’s president. They shouldn’t even be here, yet they hold the reins.

The best answer to why Trump would lose is that it was stolen. The people who made this country no longer have the power to resist their dispossession at the ballot box. Widespread censorship, deceptive news coverage, massive demographic change, political corruption, and good old fashioned voter fraud are all wielded together to achieve the desired result. This is not a model that deserves respect. It’s a crooked, illegitimate process that occasionally allows mistakes to go through. See Donald Trump’s first election.

But when mistakes happen, the other side cries foreign interference. Trump’s fair and square victory was blamed on a handful of Russian memes and accurate reporting by WikiLeaks — all allegedly a part of a nefarious Vladimir Putin plot to steal our democracy. The Left never accepted Trump’s win as legitimate, which gave their activism greater energy and justified more radical action. It would undermine their whole worldview if they acknowledged President Trump as the natural fruit of American democracy. Liberal democracy is the greatest system ever known to man, except when it puts nationalists in power. Then it’s not democracy but “fascism” or “creeping authoritarianism” or some other buzzword to cope with unbearable results.

Liberal claims to be “pro-democracy” are hypocritical and insincere. They don’t recognize democracy’s results when it fails to go their way, as in the case of Trump, Brexit, Viktor Orban, and Poland’s conservative government. “Liberal democracy” is only legitimate when they’re in charge.

Unlike our enemies, we have actual examples of rigged elections and a biased process. We don’t need to scream over a handful of Facebook memes or engage in Russophobic hysteria to prove something is rotten with our system. Take tech censorship, for instance. For years, Trump supporters have faced suspensions and bans for their content. It’s gotten worse over the past few months, with the Trump campaign facing account locks, censored ads, deleted tweets, and obvious reach suppression. Big Tech fully committed itself to throttling the reach of the Hunter Biden laptop story, this year’s WikiLeaks dumps. The scandal has reasonably proven the Biden family is corrupt, in bed with hostile foreign powers, and absolutely degenerate. But few normies know about this story due to tech suppression and media avoidance. When forced to acknowledge the story, the media claims it’s just about Hunter’s struggles with drug addiction. Most drug addicts don’t tell Chinese power players to pay them to influence their dad, however.

This is just one of many examples of media disinformation to bamboozle voters. Outlets and politicians also blamed the summer riots on fantasy white supremacists and spread an asinine study that over 90% of the demonstrations were “peaceful.” Elites did everything possible to assure voters that there is nothing wrong with blacks and Leftists burning down your city; what’s really bad is migrant minors residing in cages and police shooting criminals. The media also did its part to blame Trump entirely for COVID’s devastation and to terrify citizens into supporting mandatory lockdowns. These acts both hurt our country and the president’s polling.

Liberal officials are openly plotting to ensure the election reaches the desired result. Pennsylvania’s Democratic Attorney General Josh Shapiro effectively called the state for Biden on Halloween, saying, “If all the votes are added up in PA, Trump is going to lose.” Philadelphia’s Democratic mayor says his city will take “several days” to count its ballots, a suspicious move for a city with a long record of voter fraud. Other states are fighting to get dubious mail-in ballots counted and engaging in odious vote harvesting. Tech companies are also prepared to censor anyone who calls the election for Trump on Tuesday night — the same standard doesn’t apply to pro-Biden prognosticators.

The Democrats are fully prepared to not accept the election results if Trump wins. Hillary Clinton and other leaders have urged Biden to never concede and to fight it out in court. Government workers are plotting an effective coup against Trump if he doesn’t leave the White House. Liberals are already claiming “mail delays” and other excuses to make sure they get the preferred outcome. Even after all this occurs, they still won’t accept that Trump won the election fair and square. The Left still hasn’t accepted Trump’s 2016 win, which was blamed on Russian interference. They will find some new culprit to blame in 2020.

Our democracy fails to represent white interests and actively works against the people who made this country great. In contrast to liberals who say democracy is only achieved when the government supports globalism, we say that democracy is only realized when it represents the historic American nation.

To accept a loss confers legitimacy to our dispossession. Challenging a loss further delegitimizes the system in the eyes of white America. We need ordinary Trump supporters to see the institutions as hostile appendages on the national body and start to seriously consider alternatives. This can be accomplished through the stolen election meme.

Our ideas are bigger than Trump and our struggle will continue whatever the election results. It would obviously be better if the president wins, but if he loses, the Dissident Right must be prepared to see the election for what it is. There is nothing to be gained by pretending democracy “worked” in defeating the will of the historic American people.

« Counter-Currents Radio Podcast No. 298 Kevin MacDonald on the Election