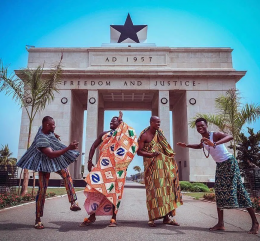 In one of my recent items, I contrasted the biased Afrocentric narrative, which is hip now and popular with many schoolteachers these days, with a rather frosty counter-narrative [2] informed by visitor reports from tribal regions. The latter is biased too, which I did acknowledge even if a bit flippantly, as it put a pretty harsh spin on things. That ignited an intense debate about how far traveler reports to tribal regions could be trusted — what if they were all making it up? Moreover, there were some areas that were better-developed, generally border regions benefiting from outside contact and trade.

I’m not out to go into historiographical controversies here. Instead, I got to thinking — why not write some good news about Africa? The bad stuff seems rather overwhelming: dysfunction, disease, despotism, deforestation, desertification, superstition, poverty, crumbling infrastructure [3], blood diamonds, “419” advance fee fraud [4], militant fruitcakes like Boko Haram, street urchins huffing gasoline, the return of slavery, drafted kids with AK-47s, dictators diverting billions of relief aid money into their private bank accounts, and stupid goddamned Elmer Fudd tourists blowing away innocent elephants until there are no more left. Surely there’s more to Africa than the usual matters of war, famine, pestilence, and death.

At last, the moment is at hand! I found some good news in the sunny nation of Ghana.

Ghana at a glance

At first, it might seem like a pretty modest country. According to the IMF’s figures adjusted for purchasing power parity, their GDP is in the ballpark of Central American banana republics. FYROM (or whatever the hell they’re calling it now), Kosovo (Southwest Yugostan), and Vietnam are more prosperous than that. Still, when compared to several other African countries, Ghanaians are loaded. They have plentiful oil reserves, and there’s a reason why part of it was once called the Gold Coast.

Moreover, economics isn’t all there is to the picture. They did have a somewhat bumpy start following independence from the British Empire, but not all that bad relative to local standards. The good news is that things got better lately, and the times of short-lived military juntas (interspersed with briefer civilian governments) have ended. Beginning in the 1990s, they started making some real progress on human rights. Ghana is now pretty enlightened, and certainly the best in the region. Hey, that really counts for something! If they can keep things on the right track, it’s going to be the most happening place there. They’ve created a bright spot in a notably troubled continent.

Other than that, they have a rich tapestry of native cultures. Over twenty languages are commonly spoken, so they’re keeping it real. English is official, facilitating commerce abroad. Not everything is sunshine and roses over there, but I’m not here to go into all that. I said I was going to be positive, right? One of the best things they have going for them is their President, His Excellency Nana Akufo-Addo. He’s excellent!

It takes a lot of guts for a head of state to question the unquestionable, but President Akufo-Addo has done it. He suspects that some of those big foundations and NGOs, now imperiously directing the world’s Covid-19 response, are up to no good.

Let’s make it clear upfront that I can’t vouch for the authenticity of his sources, or verify all of his conclusions. He said it, not me. One summary [5] breaks down his speech like this, characterizing it as a plandemic ten years in the making:

Items 5-11 do look pretty close to how things played out so far. Still, I’ll have to be generally noncommittal about the whole package. I can’t tell with absolute certainty whether Covid-19 came from a black ops lab, a bowl of funky Chinese bat soup, or whatever. Unless evidence appears pointing to genetic engineering or an otherwise artificial origin, then the most parsimonious explanation is that it evolved from something else. In that case, many of the other “security theater” items would be simply a matter of milking a crisis for everything it’s worth; business as usual. As for the Event 201 simulation, I couldn’t say whether it was a last-minute dress rehearsal, or just some random study they did for shits and giggles and then the real deal coincidentally happened soon after. However, if everything President Akufo-Addo said was correct, then there’s something that will be a dead giveaway if the script plays out fully.

Note item 14 again: “If the majority wakes up to this conspiracy, release a new virus with a 30% mortality rate and say, ‘We told you so.'” This hasn’t occurred yet. So then, if the public massively begins rejecting lockdown measures or the like, and a “mutant strain” just so happens to appear that’s worse than diphtheria, then plausible deniability goes up in smoke just like Clinton’s infamous cigar. If Ghana’s President was right about well-connected bioterrorists helping to orchestrate a massive power grab, they wouldn’t dare take the final contingency step and implicate themselves in mass murder, now that this is out in the open and the public has been told what cards are in their deck.

Again, I can’t be sure if all the dots connect. Still, in a broad sense, it might be prudent to be wary of tricky NGOs in general, and particularly the use of dialectic strategies to push one-world agendas, microchip the public [8], and all that. This stuff is so old that it’s in the Bible [9]. Fortunately, there are a few heads of state out there with the courage to defy the globalists.

Last year, Ghana’s President announced his support of an initiative to invite Africans abroad to return to their ancestral homeland. (His presentation did mischaracterize details of the slave trade, but the rest of the message is spot-on.) It couldn’t have come at a better moment. In these troubling times especially, it should be crystal clear that they’d be happier returning to dwell among their own folk.

Could it be done? Supposing that forty million African Americans answered the call, it would bump up Ghana’s population to seventy million and change. Still, they seem to know how to handle rapid development. At their rate of natural increase, that only represents a little over three decades of growth. Ghana’s population has sextupled since 1950; apparently they like sex over there.

Some already have made the trip. Three personal accounts [10] included someone who’d left the USA because of too much focus on race. (I understand. I’m getting pretty sick of critical race theory and other forms of cultural Marxism, but we have nowhere to go.) One surprising detail was that the Ghanaians regard them as white. So they have the “one-drop rule” over there, but the other way? Well, maybe it’s a matter of le plus q’il change, le plus c’est la même chose, but one of them seemed more amused by that than anything. They report strong emphasis on family and culture; so much the better then. Generally, there’s been some adjusting for the returnees, but it looks like they’re getting it sorted. All told, they seemed pretty happy.

Hopefully, many others will follow and become just as pleased. Even with legally sanctioned preferential treatment, coddling by the media, a much-too-indulgent social safety net, and all the rest of it [11], they’re just not happy in America. They never will be, no matter what we do. Besides, the weather sucks in Harlem, Detroit, Chicago’s South Side, and so forth — sunny Ghana is better!

This wouldn’t be the first time African Americans have moved to Ghana. Long before this initiative, Comrade W. E. B. DuBois [12] and his wife became two notable returnees. Both were prominent; the former a celebrity. Indeed, he had quite a history. Let’s hit the highlights.

He grew up in a picturesque and racially tolerant Massachusetts town, raised by his mother, a landowner descended from whites and a long line of free blacks. He enrolled in a sociology doctorate program at Harvard, becoming their first black Ph.D. Although he had remarkably little oppression street cred, he got in on the ground floor of the NAACP, serving as a top officer and spokesman. Thereafter, he remained a perpetual professional activist.

He bitterly opposed Marcus Garvey, who was trying to make the return to Africa possible for the masses of his people. The project was highly popular, and the furthest a grassroots effort has gone toward that end. Then it got hamstrung by the NAACP and its (((backers))) [13], denying the displaced sharecroppers a hope of seeking their fortune among their own folk. Comrade DuBois, in an editorial of the NAACP’s official organ The Crisis, even called Garvey the “most dangerous enemy of the Negro race in America and the world.” Maybe that was projection? Well, hopefully, Ghana’s new return initiative won’t get derailed by squabbling and outside interests.

Comrade DuBois was more of a cultural Marxist than a doctrinaire Marxist-Leninist, but eventually, he promoted himself from a fellow traveler to a card-carrying Communist. His world travels often involved complaining about white people or forming alliances with anyone who would oppose us. His position effectively was less pro-black than it was anti-white and anti-American. The federal government — back in the day when they didn’t care for such antics — locked horns with him. However, ultimately the worst he suffered from “McCarthyism” was temporary passport suspension. In 1959, his wings no longer clipped, he was back at it again and hobnobbed with Chairman Mao. That year, he was awarded the Lenin Peace Prize by the pale-faced Russkies, who had awarded one-way train rides to Siberia for millions of their own dissidents.

In old age, he visited Ghana at the personal invitation of their first President, Kwame Nkrumah, someone who seems to have shared his ideology. Later, he and his wife Comrade Shirley moved there. Although in earlier times, he did his utmost to derail Marcus Garvey’s efforts to shepherd the masses of disadvantaged blacks back to the Motherland, the celebrity activist ended up making the journey himself. Can we say that he changed his mind then, and think of this as an endorsement?

All told, Comrade DuBois was much lauded by the literati, fêted by dignitaries, and even heads of state rolled out the red carpet for him. Even death couldn’t stop the party; he remained showered with honors posthumously. This includes an American postage stamp; courtesy of the country he hated the most. What a sweet racket!

Where but the USA can one enjoy such a magnificent lifestyle by making a career of opposing our society?

This bourgeois Marxist led such a charmed existence, yet thought America was all for the birds. If he were still around, he’d probably say so even now, after over half a century of acquiescence to the demands of people like him. Therefore, it’s awesome that he found someplace that made him happier. Any blacks thinking of making the move can take it from that guy: Ghana is great!