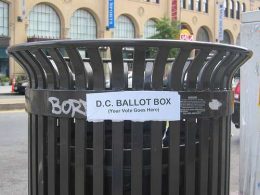 Like many of you, I got caught up in the 2020 US presidential race. From Tuesday to Friday of election week, I was glued to the internet, biting my nails and hitting refresh like a rat in a Skinner box.

I knew the establishment would try to call the election for Biden as soon as it was plausible, and as soon as that happened, I managed to wrench myself away from the coverage to collect my thoughts.

I understand why many race-conscious whites are depressed by the outcome thus far. A lot is riding on this election. It really does matter to us who wins, because Trump actually slowed white demographic decline while Biden promises to accelerate it dramatically as well as to attack our first and second amendment freedoms. It is disgusting to see massive voter fraud. It is also disgusting to watch the gloating of Leftists and the Right-wing idiots who enable them.

But their celebrations may be premature. Trump is still fighting, and he may still win.

Our lives may change a great deal depending on the outcome of this election. But at a certain point, one has to disengage. At this point, there is almost nothing I can do to affect the outcome one way or another. That is in the hands of President Trump, his lawyers, and countless officials, judges, and legislators all over the country. If the time comes for visible demonstrations of public support, I will take part. But in the meantime, I need to get back to work. We all do.

What is our work? At Counter-Currents, it is laying the intellectual groundwork for White Nationalism, meaning the right of all white peoples to their own sovereign homelands. This project requires establishing the philosophical and scientific case for ethnonationalism, the political necessity of ethnonationalism for whites, a vision of how white ethnonationalism will work, and a plausible account of how to get there from here. We also must constantly dismantle enemy arguments. Finally, we need to foster white consciousness, pride, and community.

Our work remains the same no matter who is the next President of the United States. But the obstacles and opportunities we will encounter will change dramatically. There are basically four possible outcomes.

The worst-case scenario is that Biden steals the White House and the Democrats take control of the Senate. The Left would then move to establish a one-party state: opening the borders, amnestying tens of millions of existing invaders and giving them votes, adding states to the union, changing the Senate rules, packing the Supreme Court, and weakening the first and second amendments. A lot depends on the Georgia Senatorial races in January.

The second worst scenario is that Biden steals the White House but the Republicans hold on to the Senate. We would avoid a one-party state, but open borders and amnesty will still be likely. Tech censorship will go unabated. We will face state censorship and oppression. But the second amendment will probably be safe.

It is a real question whether Biden would have the stomach and political capital to push through anything radical with a divided congress and the stench of illegitimacy hanging over his regime. After all, he would be faced with four massive crises: the second wave of Covid, BLM and Antifa riots, the economic depression caused by the first two, and a deep legitimacy crisis. Trumpism has not been repudiated. In fact, it has gained support. Biden was not elected in a free and fair election. The country remains deeply divided and bitterly polarized. This is no atmosphere in which to push deeply divisive policies. Besides, Biden is not a Leftist. He is the Senator from the credit card industry: a cynical, corrupt, greedy neo-liberal hack.

I hope this is true, but I wouldn’t bank on it. There would be no one-party state in the second scenario, but both parties are equally committed to globalism and elitism. They are also equally opposed to nationalism and populism. Hence their hysteria over Trump. He was an existential threat to the entire political establishment. The establishment not only wants to stop Trump, they want to prevent anything like Trumpism from ever arising again. Thus I would predict a bipartisan consensus around open borders and amnesty, as well as the censorship and repression of nationalist and populist ideas and organizations.

The third worst scenario is that Trump holds onto the White House, but the Democrats take the Senate. At that point, Trump and Pence might face impeachment based on any number of crackpot conspiracies, and then we are back to some version scenario one.

The best-case scenario is that Trump holds onto the White House, and the Republicans hold on to the Senate. Trump was profoundly disappointing in his first term, and there is no reason to expect anything better in his second. But even if we only get more of the same, Trump gives us the time and the freedom to press forward with our work. Trump gives us time by slowing demographic decline. He gives us freedom by resisting erosion of our first and second amendment rights. It is foolish to hope for more.

Are there any downsides to having Trump in the White House?

When there is a Republican in the White House, it tends to make people with a conservative bent feel like things are alright. Thus they become politically disengaged and complacent. This is also true of people of a nationalist and populist bent during Trump’s first term. This is bad for White Nationalists, however, because slowing demographic decline is not enough. We need to halt and reverse it. That requires that we heighten our people’s sense of danger. One could argue that the complacency fostered by Trump in the White House would make it harder for us.

It is foolish to want Biden in the White House just to rile up 70 million Trump supporters. Yes, they would be much more receptive to our message. But we might be less capable of reaching them. They might also be too demoralized to act. The establishment, moreover, will be adding tens of millions of new facts on the ground. So we might convince more people there is a problem, but the problem might become too big to plausibly solve. I hope that doesn’t happen. If it does, we will just work harder and adapt.

It is easy to get caught up in political contests, especially when important things are at stake. But we need to step back and remind ourselves that the most important issues in any political system are precisely what the parties agree upon. Before Trump, both parties agreed never to compete with each other on immigration and globalization. Trump’s greatest accomplishment as a candidate was simply to reject that consensus.

In this election, Trump was hamstrung by a point where he agrees with the political establishment. Trump pandered frantically to blacks, Hispanics, Asians, and Jews. But he would not even “dog-whistle” to white interests and concerns. Instead, Trump denounced white identity politics, but not identity-politics for non-whites. In short, Trump bought into the fake moral absolute that there’s nothing worse than “racism,” but only when white people practice it.

Substantial numbers of white Americans reject the idea that identity politics is bad only when white people engage in it. They have positive white identities, feel that whites are being discriminated against by the system, and think that it is necessary and moral for whites to take our own side in a fight. They are ready for white identity politics. But neither the Republicans nor the Democrats will represent them.

The moral revolution has to come first.

Overturning false moral principles and upholding true ones is the work of moral philosophy. It’s an absolutely necessary part of metapolitics, which is our job here at Counter-Currents. So let’s all get back to work.