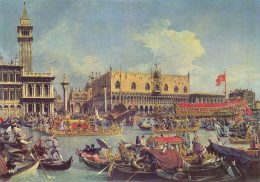 Canaletto, The Return of the Bucentaur to the Molo on Ascension Day, 1730.

On the train ride home this weekend, I ended up talking with a drunk woman about the concept of happiness. Although brief, the conversation reminded me of Giacomo Casanova’s memoir The Story of My Life. As I have gotten older, this memoir has reminded me not to let certain vices ruin my life. While each person in the Dissident Right must find their own purpose and meaning in life, my current goal is to find a balance between the things that bring short-term happiness and the hard work that creates long-term happiness.

I spent several hours on the train after visiting a friend this weekend. The luggage rack on the train was full, so I had to put my luggage on the seat next to me. A middle-aged woman sat across from me and started asking me what I had in my luggage. At first, I thought she was trying to have a conversation with me. Then I realized that she was drunk and perhaps under the influence of other substances. She kept demanding that I open my luggage to show her the contents. I kept refusing her requests and tried to ignore her, but she kept harassing me. I finally asked her if opening my luggage would truly make her happy. She told me that she did not believe in happiness and that she had never been happy in her entire life.

Despite making a scene, I felt somewhat sorry for the woman. She was probably in her early 40s but looked a decade older due to all the substance abuse. She was skinny and petite with blond hair and blue eyes, but her hands were constantly trembling, and she had a stare that seemed devoid of all emotions. Her body kept twitching until she pulled out some beer cans from her backpack and started drinking. Since she was still yelling at me to open my luggage, I tried to change the subject by asking her why she did not believe in happiness. She explained that she had been lied to, beaten, and arrested a million times and that she experienced the same misery every day. Happiness to her was as real as Santa Claus.

From my earliest memories of visiting Santa Claus at the mall, I was always happy as a kid. Even though I hated going to school with the non-white kids, I always found happiness in playing video games, reading fantasy books, and listening to heavy metal. I spent countless hours immersing myself in fantasy worlds and daydreaming about being a famous musician. The only thing I did not have was the attention of the girls at my high school. When the new bookstore opened across from the mall, I went to the history section and stumbled upon Casanova’s memoir. I bought the book and immediately started reading it with the hopes of becoming popular with the girls at my high school.

Casanova was born in Venice in 1725. He graduated at an early age from the University of Padua with a law degree and an interest in medicine. After getting into trouble with gambling and having affairs with married women, he left Venice and started becoming popular amongst the social circles throughout Europe. Casanova was arrested in 1755 but escaped from prison two years later. He eventually fled to Paris and would become a spy, a diplomat, and a writer. By 1760, Casanova was traveling throughout Europe and Russia to meet with various heads of state to promote a lottery scheme. After getting banned from Warsaw after a duel, he returned to Venice and opened a silk factory. Once the factory went out of business, he took a job as a librarian in Bohemia in 1785.

Although the librarian position offered stability and decent pay, Casanova found his life there to be very boring. Instead of entertaining aristocrats and artists, Casanova argued with the locals. His health was also deteriorating. The isolation and boredom of this period led Casanova to write his memoir. Writing about his adventures, escapades, and romances kept him from going mad or dying of loneliness. Casanova even admitted that creating his memoir gave him the greatest amounts of joy, laughter, and happiness in his life. He died in 1798 and The Story of My Life has been published in various editions since 1822.

Even in his own lifetime, Casanova was a celebrity known for his personality, charm, and intellect. He was an adventurer who socialized with the likes of Catherine the Great, Goethe, and Voltaire. During the various periods of his life, Casanova worked as a musician, lawyer, medic, diplomat, spy, and librarian. He was also a prolific writer with numerous plays, essays, novels, and a translation of the Iliad. Despite his decadent lifestyle, he was a devout Catholic and believed in the power of prayer and redemption. Before he died, Casanova declared that he lived like a philosopher and died as a Christian. Whether he lived as a saint or sinner, I hope he died a happy man.

I bought The Story of My Life with the hopes of learning how to become popular with women. Surprisingly, I found his adventures and travels to be far more interesting than his romantic escapades. From entertaining stories to humorous anecdotes, I could tell that Casanova was a highly intelligent and talented individual. As a teenager, I related to his rebellious and mischievous nature. Reading his memoir made me want to travel around Europe and party with rock stars while using my own talents to be a famous musician and writer. All while living life out of a small suitcase or luggage.

As I have gotten older, Casanova’s life seems far more nuanced and somewhat tragic. Despite having immense talents and intellect, Casanova often ruined great opportunities by succumbing to gambling and affairs with married women. These two vices caused him to be constantly in debt and on the run from scorned husbands and lovers. And while he was able to rely on his wits, charm, and luck in his early life, this lifestyle clearly took a toll on him as he got older. If he had resisted temptation or limited his urges, I think he would have found more stability, success, and happiness in his life.

The drunk woman on the train reminded me of what Casanova might have been like near the end of his life. The woman was attractive and got to travel by train through one of the most scenic areas in Europe. But instead of being happy and making the most out of life, she got wasted and ended up yelling and cursing at me over some luggage. If she were lonely, I would have chatted with her. I might have even had a beer with her. But instead of being polite, friendly, and happy, she decided to be rude, obnoxious, and unhappy.

Many in the Dissident Right disavow various forms of degeneracy. While I appreciate their concern to improve the lives of white people around the world, I think that life needs to be lived. I am not a Puritan. I like drinking whisky. I like eating cheesecake. I like immersing myself in an open-ended fantasy world. I enjoy being intimate with a woman I care about. I can enjoy all these things in moderation and at the right time and context.

After getting my weekly work done, I can enjoy a dram of whisky with friends. After working out each morning, I can treat myself to a slice of cheesecake for dessert. And if I have nothing to do on a Friday night, I have no problem getting lost in a fun book or a video game. All these things bring a little happiness to my life in moderation.

Moderation is important and will mean different things to different people. Naturally, I recommend everyone to stay away from pornography and illegal drugs. After that, each person must decide which vices they can or cannot handle. Regardless, take care of your responsibilities each day while doing the things that bring some happiness into your life. Whether it is creating content or supporting our content creators, we can all find some happiness in securing the existence of our people and a future for white children.

Casanova lived an eventful life. But as much as I admired his adventures as a teenager, his life serves as a cautionary tale of how vices can ruin your life without moderation. The woman on the train continued cursing at me and drinking until she passed out. With some moderation, she might have enjoyed the scenery of the train ride instead of causing a scene and looking like a train wreck. I like to have fun and enjoy life, but I will continue to do so in moderation.

As a wanderer and a dissident, I have all the meaning, purpose, and happiness I need in life.