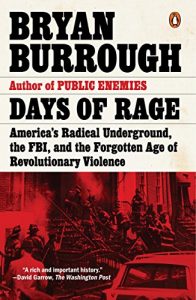 What the underground movement was truly about — what it was always about — was the plight of black Americans. (p. 27)

The Anglican Christ Church at Zanzibar is in violation of the Second Commandment; the one about not making graven images. The altar is said to be built over the whipping post of the former slave market. Elsewhere on the grounds is a monument to Negro slaves. The church’s architecture is a perfect example of a major religious impulse in Western civilization: Negro Worship.

During the abolition struggle, the moral call to end slavery was mostly made in churches across the English-speaking world. There, African pathology (yes, pathology, not just suffering) became intermixed with that which is holy. This religion has continued although Sub-Saharans are no longer enslaved or oppressed and many whites think they are unbelievers.

This theological worldview was at the center of a violent New Left [1] [1] underground movement that made a great deal of trouble in the 1970s. New Left bombings and the religion that justifies them are just another expression of things that break when Africans are integrated into white societies. Bryan Burrough has written an excellent history about this part of the 1970s.

The New Left was mostly organized and filled with Jews who were “red diaper babies.” That is to say, their parents were often supporters of Trotsky and the Communist Fourth International. They were Boomers and they felt the wind in their sails due to the expansion of the Communist world that had been ongoing from 1917 until 1970. Although many were Jews, they were not all Jews. This article won’t bother to point out who was Jewish and who wasn’t since that’s a thing easy to get wrong. Many of these New Leftists were upper-middle-class and had grown up in comfort. They were deadly serious about bringing a pro-African Communist revolution to the United States.

Samuel Melville [2] (neé Grossman) was a decade older than his New Left peers. He became interested in action rather than words in the late 1960s and learned the ins and outs of terrorist bombings from members of the Front de libération du Québec (FLQ). He became the “Patient Zero” for the bombing plague that followed. His first propaganda of the deed was helping two FLQ terrorists hijack a plane [3] on May 5, 1969. On July 26 that year (a date important to pro-Castro people), Melville bombed a building in New York City that had the words United Fruit carved on its front. United Fruit was a major investor in pre-Communist Cuba and was a major symbol of American capitalism. After more bombings, he was betrayed by an informant and arrested. He was killed by police on September 13, 1971, while leading his fellow prisoners in the Attica Prison Riot.

Burrough lists five major sub-Saharans who were the central metapolitical leaders for the New Left Revolutionaries. The first and probably most important was Robert F. Williams (1925-1996). He wrote a book called Negroes with Guns (1962). Williams called for black servicemen to carry out an insurrection during the Cuban missile crisis. Such an insurrection didn’t happen, but race relations in the US Military became very bad indeed by the end of the decade.

Then there was Malcolm X [4] (1925-1965). He was a member of the Nation of Islam and was probably the wisest of the bunch. Stokely Carmichael (1941-1991) coined the term “Black Power.” After agitating for riots in the United States, he moved to Africa and lived out the rest of his days in happiness there. Huey Newton (1942-1989) and Bobby Seale are also mentioned; they organized the Black Panthers. This organization grew very big very fast before ordinary Dinduism and the Nixon administration’s efforts against them caused it to collapse.

The Leftist bombers of the 1970s saw the Black Panthers as gods whom they worshiped. Many were smitten by Eldridge Cleaver (1935-1998) — a Sub-Saharan career criminal who published a pro-Afrocrime book called Soul on Ice in 1968. The most worshipful of them all were part of a group called the Weatherman [5] — or Weathermen, the Weather Underground Organization, or simply Weather.

They were the hard central core of true believers from an organization called Students for a Democratic Society. SDS was the youth wing of an obscure socialist organization called the League for Industrial Democracy which was founded in 1905. The Leftist/”civil rights” revolutions of the 1960s and 1970s were the culmination of intellectual and social movements that were launched decades prior [6].

The story of the Weatherman is almost well known. At the SDS conference at the Chicago Coliseum, they were part of a faction that shouted down those in the Progressive Labor movement and turned Leftism from support for the working class to support for non-whites. They organized the “Days of Rage” protest in Chicago in October, 1969.

The SDS’s office in New York was not far from the “office” of the Black Panthers. The Panthers would go to the SDS’s office and steal their stuff, but due to their theological worldview, the SDS couldn’t go to the police. Eventually, the Weathermen closed down the SDS and went underground.

They achieved national notoriety when they accidentally blew up a New York townhouse in the early 1970s. In response, many Weatherman tribes disbanded and the main group went into hiding. The Nixon administration was convinced that the group was about to get much bigger. Instead, writes Burrough, Weatherman was severely handicapped. They changed their focus to bombing symbolic targets at times when the buildings were empty and then issuing a communiqué with basic Communist talking points.

It is something of a mystery how the Weatherman terrorists got their funding. They were unique among the 1970s in that they only did one robbery. It is likely they got their funding from champagne socialists who liked the idea of an underground. There is probably something of a Jewish ethnic networking angle, too. Finally, it is possible that wealthy people might have supported such a group so that they could say they were “always” true-blue Leftists if the Communists did take over. At the time of the 1970s, the Communists had only lost in Spain [8].

The Weathermen were able to get dynamite by buying it in the New England states where it was legal to get over-the-counter. Then the FBI realized the Weather Underground members were using the identities of infants who died around the time the Weatherman terrorists were born. The FBI cross-referenced those identities with driver’s licenses recently issued in their name. The Weatherman gave the agents the slip, though. The terrorists left just as the FBI was starting to close in. The group called the event “the Encirclement” afterward.

As the 1970s continued, the public stopped responding to Communist propaganda such as that issued by the Weatherman. Black rioting had validated the ideas of the segregationists. The 1960s consisted of two separate social revolutions. The revolution of the early 1960s was the culmination of Afro-Jacobin efforts which probably started in the 1880s. The revolution of the late 1960s can be interpreted as a pro-white reaction. The Weatherman bombings were a coda of the earlier revolution.

The Weather Underground was never rounded up by the FBI. Although unrealized at the time, the FBI had shifted its focus to being a deep state actor during the 1970s. Its competence in crime-fighting subsequently declined. The Weathermen got lawyers and negotiated cushy surrenders.

The Black Liberation Army was something of a coda, too. It grew out of the wreckage of the Black Panthers and started to take off in 1971. If it was led at all, it was “headed” by Eldridge Cleaver and his staff from his headquarters in Algiers. The BLA was never as coherent as the Weathermen.

There was too much Africa in it to really be effective, but it was African, so it was dangerous enough. The organization, such that it was, was filled with internal drama and there was even a West Coast/East Coast beef. The West Coasters tended to move in on the women and money of those on the East Coast.

The BLA robbed drug dealers to fund their activity and focused on murdering police officers with various sorts of surprise attacks. For a time, they had some cover in New York City because of the “woke” High-Low political coalition of Mayor John Lindsay.

Nowhere was the insanity greater than in California. The Weather Underground operated there and a host of copycat bombers sprang up in their wake. One bunch was a marijuana [9] farmer and his wife. They issued communiqués after each bombing. Eventually, the husband had a psychotic episode [10] and killed his wife with an axe. The investigators eventually put two and two together and wrapped up the case. I suspect the psychosis was related to the man’s use of marijuana.

California’s prison system radicalized also. One woman, Fay Stender [11], hyped the life story of a sub-Saharan thug named George Jackson. She edited his writings so they were more cogent and less violent and made him a cause célèbre. Needless to say, this all came apart. I encourage all to steer clear of convicts and missions of rehabilitation. They rarely work.

The Symbionese Liberation Army (SLA) also grew out of the California prison system. Its founder was an escaped African convict named Donald DeFreeze. Their first true act of violence was to murder a black school principal that endorsed student IDs. The murder was condemned by everyone to include the Weathermen. Eventually, the SLA captured and “brainwashed” the heiress Patty Hearst. The group robbed the Hibernia Bank and pictures of attractive Patty Hearst holding a rifle during the heist became iconic.

Most of the SLA was killed in a shootout with the police in 1974. The rump group was later captured. Patty Hearst went on to have her sentence commuted by President Carter. The SLA’s ideology was an incoherent mash of Leftist ideas. If the group tied into any larger trend, it is that of the decay of the Soviet Union. By the mid-1970s Leftist ideas were attractive only to a small set of misfits.

The most murderous group was Puerto Rican independence activists. These terrorists are just one of the costs that America pays to hold the West Indian colony. The other costs are bailouts, welfare payments, and a major place for corporations to hide their profits. The Puerto Ricans used their ties to the Episcopal Church to get funding. The group’s luck ran out when its bomb-maker accidentally detonated a bomb he was making.

It is striking to note that the most radical Puerto Ricans were those who’d grown up in the mainland United States. Those that lived among Anglos felt their identity the keenest. Ultimately, Puerto Ricans must decide on their own to become independent. Therefore a metapolitical campaign on the island is in order rather than bombings on the mainland.

The last group of underground activists was led by Ray Levasseur. He and his compatriots led an ordinary existence between setting bombs and robbing banks. When Lavasseur was finally caught, he was something like the proverbial Japanese infantryman hiding out in a cave on a South Pacific Island — fighting a war long won by the other side.

While the Underground of the 1970s ended, it seems that many of their ideas were reborn during Obama’s second term. The “woke” ideology which is destroying our cities is a carbon copy of that of Weatherman and the Black Liberation Army earlier.