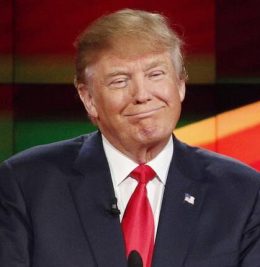 Only a douchebag can save us now.

Counter-Currents is trying to raise $150,000 this year. Thus far, we have received 737 donations totaling $108,682.84, for which we are enormously grateful. We are thus past the two-thirds point! We will keep the fundraiser going as long as needed, but the ultimate deadline is the end of the year, just over two months away. That’s a lot of ground to cover, so we will be kicking our efforts into overdrive.

A generous donor recently offered a $5,000 matching grant, which is now used up. If any of you wish to offer a similar grant, please get in touch with me at [email protected] [2].

Full information about how you can help appears below. But first, a few words about the US Presidential election.

I know many decent, race-conscious whites who want to sit out the upcoming election. I want to change their minds. I want all of my American readers who can vote to vote for Donald Trump. I understand why people are upset with Trump. He had a great opportunity to really turn things around, and he bungled it. Beyond that, his campaign has been terrible. His pandering to non-whites while taking white votes for granted is especially disgusting. He really deserves to lose.

The bottom line: If Trump loses, we all lose. If Trump wins, we have more of a chance to win. Ultimately, white identitarians are going to be the ones who save white America. Trump was just an opportunity, just a warmup act. When he is gone, real national populists will be waiting to take the stage. But that future may be canceled if Biden wins. So vote Trump.

Some people in reliably red or blue states might argue that their votes won’t count anyway. I used to think that, but I was wrong. Although the election is determined by electoral college votes, remember when Hillary beat Trump in the popular vote? Suddenly, the entire establishment developed Constitutional amnesia and treated it as a great affront to democracy that millions of illegals voting in California could not put Hillary in the White House. Trump needs every vote he can get, popular and electoral. So get out there and deliver them.

Some people argue that the Republicans will never stop ignoring whites and pandering to non-whites unless white people stop voting for them. The sad truth is that they will still do the same thing even if people do stop voting for them, because they would rather lose than be racist. We can’t change these people’s minds by rolling up a newspaper and swatting them like bad dogs. We’ll only change their minds by destroying the fake moral code that says that racism is the worst thing in the world, but only for whites. That’s one of our main tasks at Counter-Currents. Voting for Trump will make it easier for us to stay on the web and fight this crucial intellectual battle.

The cargo cults of Melanesia started during the Second World War when the Allies dropped supplies from airplanes. To this day, the natives hope to make the white man rain down free stuff upon them again by building thatched models of airplanes. Some white advocates seem to think that engaging in a cargo-cult imitation of petulant blacks will make the GOP rain down favors on us.

There are people on the Right criticizing Trump for being pro-Jewish. As if there had ever been any reason to expect otherwise. I didn’t vote for Trump because I thought he would be anti-Jewish. I voted for him because he was significantly more pro-white than his opponent. That is still the case.

There are people on the Right criticizing Trump for being pro-black, pro-Hispanic, and pro-Asian. As if there had ever been any reason to expect otherwise. I didn’t vote for Trump because I thought he would be anti-black, etc. I voted for him because he was significantly more pro-white than his opponent. That is still the case.

There are people on the Right who condemn Trump for being pro-gay. Imagine thinking that Trump would make the Republicans less gay. But, again, I didn’t vote for Trump because I thought he would be anti-gay. I voted for him because he was significantly more pro-white than his opponent. That is still the case.

Some of the same people who hold Trump to these delusional standards mock the delusions of the MAGAtards, Qtards, and other Trump cultists.

What do I think is going to happen?

This election was the Democrats’ to lose, simply based on demographics. But with the Biden-Harris ticket, they might have been stupid enough to lose it. It was a miracle that Trump was elected in the first place. It will be an even bigger miracle if he gets reelected. But my gut is telling me that he will pull it off.

The only thing I am certain of, however, is that no matter who wins, the other half of the electorate will declare the result illegitimate: Democrats because they are entitled brats. Republicans with very good reason. If Biden wins, it will be because of demographic replacement, ballot fraud, and tech censorship. If Biden wins, he cheated, and Trump should not concede under any circumstances.

What are we going to do at Counter-Currents if Biden is elected? More of the same. The headwinds will be stronger, so we will just have to work harder — all of us will, including you, dear reader. But if Biden does win, tens of millions of white Americans are going to wake up to the fact that their country has been stolen — and their future as a people mortally threatened — by demographic displacement and an opposition handicapped by the delusion that racism is the greatest evil, but only when it favors white people. There will be a lot more people receptive to our arguments. Even though it will become much more difficult to reach them. And perhaps it will be too late.

All the more reason to help Counter-Currents today, while you still can.

Just go to our Entropy page [7] and select “send paid chat.” Entropy allows you to donate any amount from $3 and up. (You can make a donation, even when Entropy says that we are not currently livestreaming.)

If you want to leave a question or comment, they will be read and discussed on the next Counter-Currents Radio livestream, which air on Sundays noon PST/3pm EST on DLive: https://dlive.tv/Counter-Currents [8]

If your bank does free money transfers to other banks in the US, please contact [email protected] [9].

[10]Sometimes the old ways are best. The least “de-platformable” way to send donations to Counter-Currents is to put a check or money order in the mail. Simply print and complete the Word [11] or PDF [12] donation form and mail it to:

Finally, we would like to broach a very delicate topic: your will. If you are planning your estate, please think about how you can continue helping the cause even after you are gone. The essay “Majority Estate Planning [15]” contains many helpful suggestions.