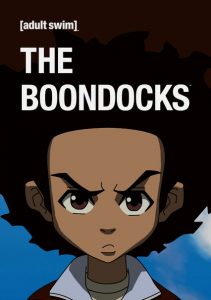 HBO is planning a reboot of The Boondocks [1], an animated television series which ran from 2005 to 2014. Created by black cartoonist Aaron McGruder, the show was an interesting sociopolitical satire, lampooning blacks at least as much as whites. Although the series’ creator majored in the largely grievance-focused field of African American studies in college, it is not the unreflective blaming of whites for the problems of blacks that one might expect.

The Boondocks follows two young black boys who, along with their grandfather Robert, have recently moved from culturally-enriched Chicago to Woodcrest, a wealthy white suburb. Huey Freeman most likely represents the views of McGruder, and is often critical of the ignorance and shallowness of his co-ethnics. His brother Riley, an arrogant wannabe gangster, serves as his foil. 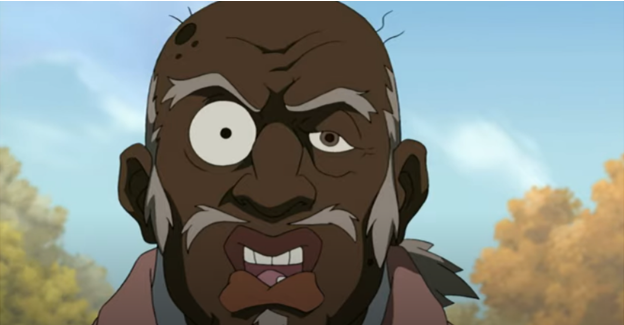 Uncle Ruckus, an obnoxious buffoon who idolizes whites and despises his own race.

The most memorable character in the series is Uncle Ruckus, an elderly black friend of Robert Freeman. Despite the name, he is no one’s uncle; “Uncle” is his given name, in a parody of blacks’ tendency to avoid standard naming conventions. Whenever Ruckus appears on screen, a certain musical theme plays to indicate how the audience should feel about him. The impression is of something unpleasant, old, and backward, which fits both his appearance and his personality.

McGruder uses Ruckus to make crude anti-black sentiments seem absurd by putting them in the mouth of a buffoon. Ruckus is obese and resentful even by black standards, and his idea of an appropriate wedding speech involves discussing the groom’s “twisted negro penis.” He goes to great lengths to flee from his black nature, including always introducing himself as “Uncle Ruckus — no relation” to distance himself from the Ruckus family, who are, in fact, his relatives. He summarizes his own race with the words “ain’t two of ‘em in the history of the world that’s worth a squirrel fart.”

It is easy to understand why Ruckus does not wish to be black, as his own black family was hateful and abusive, with the exception of his very anti-black mother. However, he is still clownish in his attempts to distance himself from his own race. His mother, who idolized whites, had told him that he was adopted as a white baby, which he happily believed, along with the fanciful explanation that his visible negritude was caused by “re-vitiligo,” a skin condition which was “the opposite of what Michael Jackson got.” He attempts to treat this condition with a mixture of bleach and sulfur, which he credits with preventing him from getting any blacker.

Ruckus at one point takes a DNA test that confirms that he is of African ancestry and despairs at the revelation. To fit his idea of black identity, he quits all of what he claims are 32 jobs, starts drinking heavily, and contemplates selling crack. He becomes suicidal, jeopardizing a reality show on which he is the star. Ultimately the scientists responsible for the test remedy the situation by giving him a new fake result which puts him at slightly over 50% white, blaming the original “error” on a “black intern.”

Despite the clown status of the anti-black “racist” Uncle Ruckus, the series is surprisingly frank about the shortcomings of blacks. One such issue is their tendency toward petty conflict. Several episodes describe the phenomenon of “nigga moments,” which Huey defines as “the moment when ignorance overwhelms the mind of an otherwise logical negro male, causing him to act in an illogical, self-destructive manner.” This can be provoked by, for example, two black men bumping into each other in the street, and can lead to violence and even death. A white man, by contrast, responds to the same type of provocation by saying “wait, I’m white” in a smug tone of voice and walking away.

An elderly black man known as Colonel H. Stinkmeaner is the embodiment of the nigga moment, although this is not to say that he is otherwise logical. As Huey puts it, he has been a cantankerous old man since his childhood, which he spent “disagreeing with most things, especially those involving happiness, unity, and kindness.” He took no joy in watching the sunset over the ocean, and was not disappointed when as a teenager he lost his eyesight to cancer. 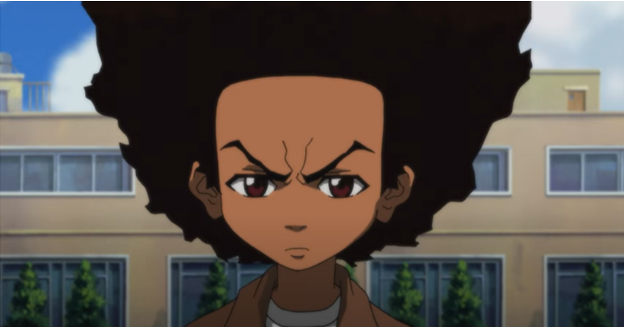 Huey during an encounter with two members of the Hateocracy, a sadistic black gang.

Stinkmeaner was a member of an elderly black gang known as the Hateocracy which formed at a nursing home. They dedicated their lives to causing others pain for its own sake, and after having temporarily split up, they reform after Stinkmeaner’s death to terrorize the Freeman family. They are ultimately prevented from killing the Freemans by the arrival of the police, who explain that they are familiar with nigga moments and that the only thing that can stop such a moment for good is jail.

An alternative solution to the nigga moment is given in an episode in which Stinkmeaner’s spirit finds a way to torment the living. The angry ghost possesses the body of assistant district attorney Tom DuBois, the most white-presenting black man in the series, forcing Robert to call Ruckus for an exorcism. As Ruckus explains, it is important to use objects which “strike fear into a nigga’s heart,” such as a whip, a nightstick, or a job application. But despite prolonged efforts, including beatings and the holy words “nigga, get yo’ black ass outta here,” the black spirit simply mocks his tormentors.

Eventually, Huey concludes that a nigga moment thrives on violence, and so can only be ended by peaceful means. He finds common ground between Ruckus and the spirit of Stinkmeaner, reminding them that they share a disdain for both black people and hip-hop. They both begin to laugh at Stinkmeaner’s mockery of the latter, and as Huey puts it, “where there is harmony and peace, a nigga moment cannot exist.” Stinkmeaner’s spirit is finally torn out of Tom’s body and taken back to hell.

A related issue is blacks’ lack of sympathy for each other, which is evident even in their dreams. Robert Freeman at one point dreams that he is being attacked in his own home by an army of clones of Stinkmeaner. As he flees upstairs, he throws them Jazmine DuBois, an innocent young mulatto girl, and pushes her father Tom into the crowd as well, hoping that this will slow them down. As his grandsons are overwhelmed by the mob, he flees out the window, abandoning them. Still pursued by the mob, he comes to a dock, where he sees Uncle Ruckus in a boat. Ruckus attempts to leave Robert to his fate, but he swims to the boat and commandeers it, dumping Ruckus into the water and abandoning him to the Stinkmeaners. When Huey wakes Robert and asks him if he was having a bad dream, he replies, “bad for y’all,” and sings joyfully that “I lived, and you died!” 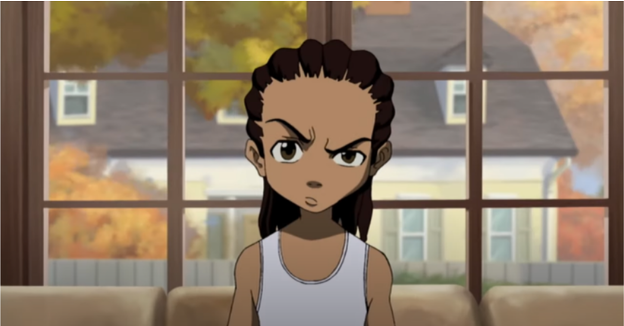 Riley does not appreciate police attempts to get information from him.

Riley has a similar antisocial attitude. He often laughs at the misfortunes of other blacks, including his grandfather being beaten by Stinkmeaner and Whitney Houston being hit by her husband. At one point he turns a school fundraising effort into a large-scale scheme for profit. One of those he employs in his attempt to become a candy-bar kingpin is an aggressive and violent blonde girl named Cindy. Riley expresses his values in his praise for her — “what I really liked about her was that she had less compassion than the average girl.”

Blacks are also lampooned for their infamous inability to serve as unbiased jurors. In one episode, black singer R. Kelly is on trial for urinating on a 14-year-old girl, which is apparently a sexual fetish. The case against him is clear, including eyewitness testimony, video, and photographic and DNA evidence. But of the two opposing groups of protestors outside the courtroom, the larger one supports R. Kelly “because he good,” as one woman interviewed puts it. She expresses contempt for the “literate-ass uppity niggas” on the other side, which is a preview of what happens in the courtroom. 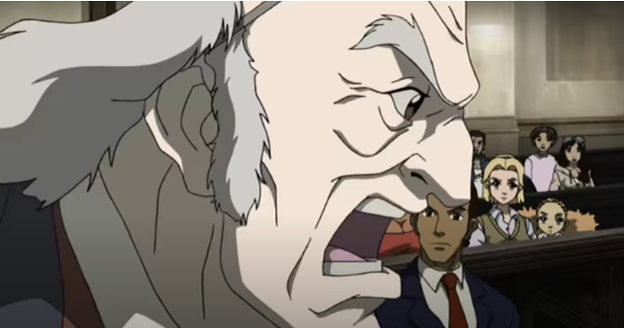 R. Kelly’s defense comes from a white man who puts scare quotes around terms like “evidence” to belittle the facts. He begins by suggesting there is nothing wrong with having sex with children, since the ancient Greeks did it. Next, he moves to calling the black prosecutor racist. As he explains, R. Kelly peed on a black girl, so he clearly loves the “sistas,” while Mr. DuBois is married to a white woman, which evokes the jury’s racial resentment. The defense attorney turns on a boombox and R. Kelly starts singing, which prompts most of the courtroom — including the judge — to start dancing. Tom desperately invokes the evidence and Huey makes a brief speech, but they do not have the jury’s sympathy. As Huey puts it: “I did battle with ignorance today, and ignorance won.”

Another issue that comes under criticism is the general ignorance of blacks regarding politics. One episode covers the 2008 election of Barack Obama. A German reporter is visiting the US to cover the campaign, and interviews several blacks on their attitudes towards the future president. Riley frankly admits that he is voting for Obama because he is black, and boasts that he will no longer have any reason to do homework or listen to police once he takes office. Rapper Thugnificent pretends to be interested in politics in order to gain publicity, but it is revealed on a televised talk show that he cannot name the three branches of government. Robert makes several claims of policies Obama will enact, but the reporter points out that none of these are true.

There is also a fanatical attitude portrayed on both sides. Uncle Ruckus declares that Obama is a “Muslim communist Antichrist” and responds to his popular “yes we can” slogan with his own scrawled on a picket sign: “no you can’t, nigger.” Huey is not enthused about the new president, and responds to a black Obama supporter’s inquiry as to his opinion of the incoming president with the word “eh,” to which the supporter takes offense. An angry black mob forms, and he is denounced in the press for his noncommittal syllable. Both Ruckus and Huey briefly intend to flee to Canada, feeling that there is no place for them in the new America.

As Ruckus would say, there is powerful niggatry at work in this country today, and it possesses both blacks and our own people. Neither the nightstick nor the job application will be enough to stop it. As for jail, many of those who deserve to be incarcerated will not be due to the political situation. A reconciliation based on shared hatred is also unlikely. But we cannot remain trapped in an eternal nigga moment.

Interracial harmony may be impossible, but we can at least hope for a release from perpetual petty conflict among our own kind. Faced with such provocations, we must say: “Wait, I’m white.” There is a deeper struggle we must be committed to. This will require a positive creative spirit and the willingness to mock the confederacy of dunces we find ourselves both ruled and surrounded by.