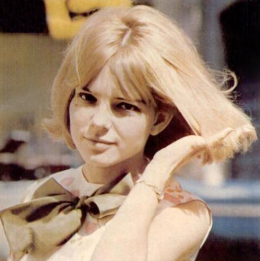 There once existed a time, alien to my young brain, in which people primarily discovered and listened to pop music on radio stations. These were entities subject to important forces, like censorship and record label interests, that gave rise to various standardizations and trade practices that persist to this day. During the age of the radio, the forces of globalization weren’t as strongly felt in the areas of consumer-level pop culture, a consideration that bequeathed us a treasure trove of natural experiments on the national level about what forms pop music can take in the West. One such experiment, perhaps matched only in fascination by the dynamics of German pop during the Cold War, was the pop music scene of France.

French pop music took a number of interesting turns before arriving where it is today. One of the last markets in Europe to retain a taste for songs in its own language, the French musical landscape incorporated developments in rock and pop songwriting across both the channel and the pond in the 1960s to create what is called “yé-yé,” an onomatopoeic term rooted in the habit of English rockers to shout “yeah” and newly inspired French writers’ insistence on copying it. [1] [1]

Active in the French pop scene at the time was one Serge Gainsbourg, who cut his teeth in the music business with jazz and chanson music, but sought a greater platform in production in writing around the time of yé-yé. He was initially shut out from wider audiences due to his tendency towards the macabre or the lewd, but toning these attributes of his compositions down was enough to collaborate with several different yé-yé musicians in the 1960s, leading to his writing the Eurovision track for the country of Luxembourg in 1965.

His indisputable songwriting chops aside, Gainsbourg’s appearance and voice were not quite en vogue in France at the time. When it came time for Eurovision, he and jazz musician Alain Goraguer put the 16-year-old France Gall on stage. Gall, a teen pop icon who was riding the smash success of her first few singles, had already collaborated with Gainsbourg on her chart-topper “N’écoute pas les idoles.” Gall performed Gainsbourg’s “Poupée de cire, poupée de son [2].”

Gainsbourg quickly became Gall’s primary songwriter. His aptitude for melody and witticism helped the duo obliterate French and European charts for the next several years, rivaled only by the exceedingly famous Francoise Hardy in the Francophone world.

Gall’s musical style fell broadly in line with what was common at the time, which was easily-listenable pop-rock influenced by English beat music. Gall especially epitomized the general innocence of the period, both in image and in musical content; her early discography is the very definition of fluff. That changed in 1966, when she recorded Gainsbourg’s “Les Sucettes.”

There are two layers to this unfortunate episode that make the whole thing worse, however. Gall was 18 years old when she recorded “Sucettes,” and professed more than once to her ignorance regarding the song’s sexual undertones. The controversy and embarrassment surrounding her after the track’s release was so unrelenting that she went into hiding for weeks as a result, breaking off her professional relationship with Gainsbourg for several years before allowing him to produce her psych-rock records in the 1970s. [2] [3] Reflecting on the situation, Gall remarked that she felt “betrayed by the adults around [her].” [3] [4]

Curiously, she also noted that Gainsbourg penned “Sucettes” with its aniseed-based pun after she told Gainsbourg about childhood memories of those specific lollipops. Gall moved to Japan at the end of the decade.

It is tempting to be cynical about this whole scenario and write off Gall’s disgrace as a feigned episode, a common exploitation of celebrities when they’re caught up in a scandal. This is rather shortsighted. For one, Gall’s story would only be convincing if the world around her would plausibly believe that an 18-year-old would be unfamiliar with such innuendo. That requires, to at least some extent, that the average 18-year-old wouldn’t be familiar with such innuendo, exceptions aside. Even if that weren’t the case, Gall might very well be uniquely innocent among French girls at the time. Neither possibility reflects well on Gainsbourg. Depending on which scenario is closest to the truth, he either took advantage of a nation’s naivete or a young girl’s; I won’t comment on which one is worse.

In any case, it might behoove us to take our own side in this situation. Have I mentioned Gainsbourg’s early life [6]?

The “Sucettes” controversy is interesting for other reasons, though. For one, it reflects Gainsbourg’s character in twofold fashion: there is his preestablished penchant for working sex and death into his music, and then there is his newer perversion: humiliating white women.

“Sucettes” was not the only example of a French pop singer who felt the world come down on her after performing with Gainsbourg. Others have less convincing claims to innocence, but nonetheless, there are horror stories abound. These range from the infamous “Je t’aime. . . moi non plus,” initially recorded with one Brigitte Bardot [7], who pleaded with Gainsbourg [8] not to release the final track. [4] [9] Naturally, Gainsbourg later released the song with one of his many wives, the English Jane Birkin, whose orgasmic moans led to the track’s exclusion from the Top of the Pops and a denunciation from the Pope. Birkin was far less embarrassed by the whole ordeal than Bardot was. But one does have to ask: Is that really such a good thing?

Culture does not change in a vacuum. It takes conscious action by intelligent tastemakers to change direction, and it’s done so with the tacit approval of a public that doesn’t have very high standards. Consider “Sucettes” again. The song was controversial, but did that stop the public from clamoring for it? Quite the opposite; it may also be true that Gall’s shame over the track boosted sales even further. Birkin lent her climax her approval, paving the way for starlets to feel ever more comfortable with what they did on air. Birkin’s moaning cleared the air, at least in France, for both Gainsbourg’s own perversions and the rise of the sex symbol. [5] [10]

It’s not often you hear about who’s actually behind these developments, abstracted away as they are with high-minded rhetoric about something being in the air. This isn’t how culture works. We can trace specific events back to specific creators with such precision that we can make accurate guesses about what kinds of people are behind social developments before we even hear their names. Gainsbourg was, in so many different ways, like another Rick Rubin [11]. He was a well-connected creative with a passion for experimentation — or subversion — that, by all accounts, was very talented at what he did.

Much of Gainsbourg’s antics were excused away on the grounds that he was a remarkable producer and songwriter. Well, he definitely was. So was Rick Rubin. They were both very good, however, at doing bad things. In Rubin’s case, that was popularizing hip hop before moving forward and turning pop music in the 90s into brain-melting clip jobs. In Gainsbourg’s case, that was making beautiful white women sing sweet sings about fellatio and increasingly out-there tirades against LSD or working in general. The brain poison aside, Gainsbourg was also exceedingly talented as a melody man. It’s enough to compare Bardot’s work with other producers to her smash hit, the Gainsbourg-penned “Bonnie and Clyde [12].” Today, Gainsbourg is remembered as one of France’s greatest talents, his abuses consigned to amusing footnotes in the music journo’s arsenal.

Meritocracy is what shapes the West’s consciousness, but not necessarily its institutions. It is an easy analysis for how and why people end up in the places that they do, but it also conveniently obscures crucial information about who people are and what they did to end up in their stations. It passes the sniff test because those in positions of power are generally good at something, even if said something is unbearable to the aesthete, like pop music. [6] [13] People generally also tend to assume that the world as-is is also the world as it would be [14], which is what leads to hand-wringing about what would take the place of cultural touchstones that have their roots in the things nationalists would rather see gone.

Culture, of course, comes not from a vacuum. As a matter of fact, it abhors it. The people who shaped the things that we call cultural touchstones in the modern West are not members of our fold. They are the Gainsbourgs and Rubins of the world. They have names, and much like the social upheavals that they preceded, they did not emerge from divine essence nor did they sniff out a moment in the cultural wind with their schnozzes. They are men who act — and act predictably — and their behavior has serious consequences for the world that surrounds them.

It’s enough to point out Gainsbourg’s many curious or outraging strokes in the world of the arts. But what of his motivations? There lies the simple perverse, in that Gainsbourg might simply have derived some amount of personal satisfaction from doing the things that he did. But pranksterdom typically requires some kind of deep-seated dissatisfaction with the thing that one is mocking or taking advantage of, or else lighthearted ribbing would be kept between friends rather than unleashed on society as a whole. Maladjusted teenagers don’t ding-dong-ditch out of respect. If Gainsbourg found his antics so droll, then what is it about putting one over on the French that he found so amusing? It certainly wasn’t a well-meaning effort to improve their ability to make art, seeing as he spent his entire career shaking popular formats on their head in order to shock.

We can speculate about that all day. I, however, think that the question need not be answered; both because the truth behind it is ugly and because we never should have been forced to ask it in the first place.

We can make music without Gainsbourgs. I know it’s possible, because the source material he molested was there from the get-go.

[3] [21] A useful synopsis of the story which is known mostly in scattered bits on the internet can be had in Viv Groskop’s “Spotlight This Week: France Gall [22],” The New European, January 18, 2018.

[4] [23] Most sources suggest this was done because the original track, equally as scandalous as Birkin’s later recording, upset Bardot’s millionaire German husband [8]. This is corroborated by Bardot herself in Barnett Singer’s Brigitte Bardot: A Biography (London: MacFarland & Co., 2006), page 92. Bardot would later release the track anyway after two decades had passed (page 147).

[5] [24] A similar process occurred in the US. WAP [25] didn’t spontaneously emerge from the aether. Conservative commentators have been impotently whining about the degeneration of pop culture since the rise of paperbacks; see Robert Hampton’s linked article for a brief discussion of the Parents Music Resource Center. The long and short of the story, of course, is that the people shifting culture in the wrong direction were also making culture; those who griped about it were not, and they looked awfully stuffy in the process. It’s why we remember Dee Snider’s remarks before Congress [26] and not Tipper Gore’s. The music industry ended up embracing those Parental Advisory stickers anyway, since they were basically just free advertising to kids that the album in question was cool as hell.