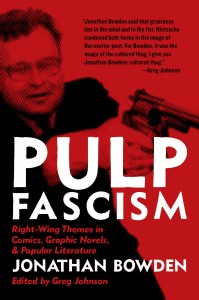 There are three formats for Pulp Fascism:

How to order Pulp Fascism:

To use a credit card or bank transfer, please contact us at [email protected] [1].

Jonathan Bowden was a paradox: on the one hand, he was an avowed elitist and aesthetic modernist, yet on the other hand, he relished such forms of popular entertainment as comics, graphic novels, pulps, and even Punch and Judy shows, which not only appeal to the masses but also offer a refuge for pre- and anti-modern aesthetic tastes and tendencies.

Bowden was drawn to popular culture because it was rife with Nietzschean and Right-wing themes: heroic vitalism, Faustian adventurism, anti-egalitarianism, biological determinism, racial consciousness, biologically-based (and traditional) notions of the differences and proper relations of the sexes, etc.

Pulp Fascism collects Jonathan Bowden’s principal statements on Right-wing themes in popular culture drawn from his essays, lectures, and interviews. These high-brow analyses of low-brow culture reveal just how deep and serious shallow entertainment can be.

The Heroic in Mass & Popular Culture
1. Pulp Fascism
2. From the Last Interview

—Greg Johnson, from the Foreword

“Jonathan Bowden was uniquely gifted as a cultural critic and revisionist, willing to explore the obscure areas of high and low culture, and apply ideas from the former to the analysis of the later, starting always from the supposition that inequality is a moral good. Bowden’s texts are dense and rich with reference and insight, yet remain entertaining and replete with humor.”

“Many men give speeches; Jonathan Bowden gave orations. To experience one of Bowden’s performances must have been something like hearing Maria Callas in her prime or witnessing one of Mussolini’s call to arms from a Roman balcony.

“As an intellectual, Jonathan was a Renaissance man, or perhaps a bundle of contradictions: his novels and paintings were of Joycean complexity, and yet, in his orations and non-fiction writings, he was able to cut to the essence of a philosophy or political development in a way that was immediately understandable and, indeed, useful for nationalists.

“Pulp Fascism could be called Bowden’s ‘unfinished symphony’– his attempt (not quite realized) to reveal the radical, ambivalent, and, in some cases, shockingly traditionalist undercurrents in pop culture.

“That which envelops our lives is taken for granted . . . and thus rarely properly analyzed and understood. Bowden brings new life to those characters and comic-book worlds we too often dismiss as child’s play.”

“What’s so important about comic books? As someone who has also written about comics, I answer thus: comic books are, like it or not, part of our modern popular culture, and we ignore that culture at our peril. For a very long time now, the Left has been practicing ‘deconstruction’ on our beliefs, our ideals, our traditions, our worldview, undermining the foundation upon which a people survive and thrive. It is high time that the New Right practices some deconstruction of its own. But Jonathan Bowden goes beyond negative criticism; indeed, a considerable portion of this volume is positive commentary on more healthy expressions to be found in comics, graphic novels, and fantasy literature – almost always in those works produced by racially European creators.”

Jonathan Bowden, April 12, 1962–March 29, 2012, was a British novelist, playwright, essayist, painter, actor, and orator, and a leading thinker and spokesman of the British New Right.

Born in Kent and largely self-educated, Bowden was involved with a series of Right-wing groups for which he was a popular speaker, including the Monday Club, the Western Goals Institute, the Revolutionary Conservative Caucus, the Freedom Party, the Bloomsbury Forum, the British National Party, and finally the New Right (London), of which he was the Chairman.