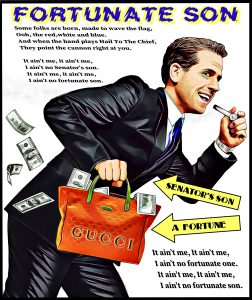 As the sickly, suicide-grey rays of a frosty autumn Sunday mornin’ in Georgia wriggle through my imitation-wood Venetian blinds, I pause to reflect how much the Hunter Biden saga reminds me of Robert Redford’s Oscar-winning 1980 dysfunctional-family drama Ordinary People, which was based on a novel by Judith Guest, whom I’m going to assume is Jewish without even bothering to check.

Hunter Biden, may the Lord bless him and his AIDS-flavored crack pipe, is obviously the suicidal Conrad Jarrett, the underachieving younger brother whose life unspooled after his more popular and jock-like older bro died. Conrad was played to perfection by the otherwise annoying Timothy Hutton, and just like in Hunter Biden’s more dissolute pics, in the movie Hutton had those dark circles under his peepers that I refer to as “anus eyes.”

In real life — if you believe the nearly blind Delaware computer repair guy’s story about a laptop that Hunter Biden dropped off and never picked up, I mean, this story is still fresh and if you’ve been following the news for the past few decades as I’ve masochistically forced myself to do, you’d realize it’s never wise to leap to conclusions no matter how desperately your heart wants to take you there — Hunter Biden reacted to the death of his older, more handsome, and rampagingly more successful brother Beau from brain cancer by engineering business deals between his dad and Ukrainian pols when he wasn’t busy sniffing coke off underage Asian girls’ tushes.

The moral of the story here is that only the strong and wise survive long enough to smoke crack and attempt suicide.

Even the names “Buck” and “Beau” are so similar that you wind up with no other choice than to blame the Deep State and accuse Robert Redford of being a fed.

The news cycle is dictated to us, the Big Problems are chosen for us, and many are hoping that these photos of Hunter Biden looking like he had a blood transfusion from Lou Reed’s corpse will be an October Surprise that swings the election toward Trump. Others among us suspect that this story will pass like a mild queef in the night.

At this point, why anyone expects anything to make sense makes absolutely no sense to me. Thirty years ago, I was under the impression that Ice Cube was one black gent who would never sell out to the man. (I refer to him as a “gent” because I feel it would be inauthentic for me to call him “my nigga,” a little harsh for me to flat-out call him a “nigger,” and saying “the ‘N’ word” is essentially like saying “nigger” while wearing diapers, so what’s the point?)

But now Ice Cube is working Donald Trump for money like a pimp works a ho, his former Nigga Wit Attitude Dr. Dre is nearly a billionaire, and all the blood is rushing to my head because the world is upside-down.

In Portland, white politicians are willingly undergoing struggle sessions that edge them closer and closer to suicide. In DC, Lindsey Graham makes a hilarious comment about segregation and then blows it all by saying it was just a joke. In a tiny Indiana town that no one in their right mind cares about, local politicians are apologizing for the fact that a pickup truck with a Rebel flag was recently spotted in a fast-food lane.

Big Tech continues to bust dissident balls with unrestrained sadistic glee. Disney will now place even more ominous anti-racist warnings on wonderful old cartoons about singing, xylophone-playing, slant-eyed Siamese cats. Facebook will now deny access to alleged “Holocaust deniers.” And Yelp will now allow your business to be tagged with the modern equivalent of a pink triangle or yellow star.

On America’s streets — or at least this is what they’re telling me — racist white truckers are stabbing innocent black men, white women are falsely accusing black men of being murder-prone, white men are assaulting little black boys while telling them that black lives don’t matter, high-school yearbook pranksters are defiling black students’ entries with hate speech such as “RIP Harambe Dooga booga,” and people are eating chocolate-covered marshmallows because it subliminally reminds them of cannibalizing black people’s brains.

American Negroes can’t catch a break these days. Imagine being so hate-starved that, merely for attention, you stage a fake hate incident against yourself involving lighter fluid and four imaginary white men who probably wouldn’t give your fat caramel-colored ass a second look, and you still can’t get any attention because the press tends to quietly bury all such stories.

On our campuses, professors are getting fired for saying “nigger” even though it’s “in a pedagogical sense.” When a group of blacks attacks a group of whites while shouting anti-white slurs, white students become “furious” when the incident is reported as a hate crime.

Let’s not forget the Jews, though — not that they’d let us forget them, anyway. Jews are feeling the pinch out on America’s lawns, with swastika after swastika befouling the freshly mown grass. Anti-Semitic neighbors feel so emboldened by Trump’s Jew-hating dog whistles that they refer to their neighbors as “dirty Jews” whether those Jews happen to shower every day or not. Rabbis can’t even go out for a bagel in San Diego without being attacked.

The blame, as always, is falling on the soft beige skulls of white men, who, despite the constant shrieking about their imaginary “privilege,” are so utterly demoralized and dispossessed that they don’t even control the meth trade anymore.

Men who, upon a cursory glance appear to be white and whose forefathers likely eagerly claimed to be white back when America’s cultural elites were entirely white and it was fashionable to be white but who’ve created such a thick climate of anti-whiteness that they are now desperately un-checking the white box, are writing genocidal articles about how there are too many white men, and yet they aren’t getting arrested for terroristic hate speech.

Despite all this, many aging white rock stars have been brainwashed by their managers into believing that America is such a dangerous place for black people that they vow to leave this country should Donald Trump be reelected. Stevie Nicks and her desiccated vagina are threatening to do it. Tommy Lee swears he will take all ten inches of his dignity and move to Greece. Bruce Springsteen says he will fart on New Jersey and run to Australia if Trump wins.

That’s right — white rock stars are so fearful that black bodies will ooze blood in America’s streets under a second Trump regime that they will fly first-class to predominately white countries in order to, I’m not sure, set an example for black people?

None of it makes sense in a country where even the president is threatening to leave if he loses the election.

But is it really better anywhere else? In France, students are decapitating teachers for showing Muhammad cartoons. Turks are talking shit about Armenians again. Greeks can’t be pro-Greek without being jailed for it. Even gentle Ethiopia is a cesspool of hate speech.

Despite all of our efforts to eradicate racism, it seems to be everywhere — and growing.

It can’t get any worse, right?

No. It can always get worse.