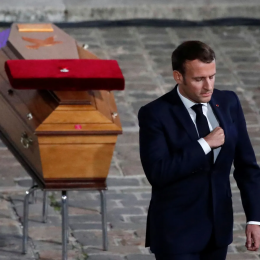 French President Emmanuel Macron issued a declaration of war this month against radical Islam after a school teacher was stabbed to death for showing Muhammad cartoons to his class. “What we must attack is Islamist separatism,” Macron said earlier this month [2]. The president emphasized that “secularism is the cement of a united France” and the nation must create an “Islam of France” that respects liberal values such as gender equality and free expression — at least the kind tolerated by the regime.

“Samuel Paty [the slain teacher] . . . became the face of the Republic, of our will to shatter terrorists, to (do away with) Islamists, to live like a community of free citizens in our country,” Macron said at the teacher’s funeral [3]. “We will not give up cartoons, drawings, even if others back down,” he added [4].

Macron believes secular liberalism cannot tolerate Islamic fundamentalism and Muslims must conform to his ideology. But does secular liberalism, backed by a semi-authoritarian government, have what it takes to vanquish radical Islam? And is Macron’s vision something for the Right to cheer on, or to look on with horror?

Macron did back up his words with action [5]. The government rounded up hundreds of suspected extremists and would deport over 200 of them. Over 50 Islamic nonprofits are under investigation for their ties to radicalism. The government also vows to end Islamic homeschooling and bar foreign imams from entering the country. French police also protected the projection of Charlie Hebdo’s infamous Muhammad cartoons onto government buildings, signaling to Muslims that they must tolerate this blasphemy.

Police stand guard as Charlie Hebdo cartoons of Muhammad were projected onto a town hall in Montpellier, France as a tribute to the history teacher who was beheaded by a Muslim refugee. In 2015, 12 people at Charlie Hebdo magazine were killed by jihadists. pic.twitter.com/yOmzUWZJtM [6]

This hostility toward radical Islam [8] outraged the Muslim world. Turkey, Iran, Pakistan, and other Muslim states have condemned Macron’s crackdown. “It is unfortunate that he has chosen to encourage Islamophobia by attacking Islam rather than the terrorists who carry out violence, be it Muslims, White Supremacists or Nazi ideologists,” said [9]Pakistan Prime Minister Imran Khan. Muslims throughout the world are threatening to boycott French products until Macron apologizes and makes amends.

Macron seems unfazed by this response. There is something refreshing about this stance, even if it comes from a poster boy for globalism. For years, Western politicians have done nothing about Islamic extremists and would desperately appease them every time a terrorist attack occurred. They would say how much they stand with the “real Muslims” and how the attack’s primary victim is Islam. Consider how George W. Bush visited a mosque after 9/11 and fervently defended Islam as a “religion of peace.”

Macron, on the other hand, acknowledges that Islamism is a threat and must be dealt with. France cannot both have no-go zones and Charlie Hebdo. Macron is choosing the Left-wing satirical paper over unassimilated minorities. Marine Le Pen, Macron’s primary election challenger, is defending the president. [11] “This situation calls for a strategy of reconquest,” Le Pen said in support of the crackdown. “Islamism is a bellicose ideology whose means of conquest is terrorism.” Both the nationalist and the liberal are now on the same side against radical Islam. This probably comes as a shock to liberals who fawned over Macron as the antidote to national populism. The French president now steals nationalist ideas. Macron’s ministers also exhibit a political stance atypical of globalists. His interior minister, Gerard Darmanin, says [12] France has grown more “savage” and extreme force must be used to counter this effect. The education minister, Jean-Michel Blanquer, accuses the university system of enabling radical Islam with its promotion of intersectionality. Blanquer also believes this is a foreign import from America. “There is a struggle to be lead against an intellectual matrix which has come from American universities and intersectional theories . . . which are polar opposites to our republican model,” he said in a recent interview. [13]

Can this model succeed against radical Islam? Maybe. Secular liberalism corrodes people’s culture wherever it takes root. The banlieues gravitate toward Islamic fundamentalism due to official state tolerance of their differences and their profound alienation from French society. They know they don’t belong in France and they do not want to become French. They turn to radical Islam to give themselves a strong identity within an alien environment. Immigrants know they can make more money in France and it’s less of a shithole than their homeland, but that’s it. They don’t love France.

Most Western liberals are ok with that — they don’t love their countries either. They fawn over exotic cultures and encourage multiculturalism to undermine national homogeneity and identity. However, Islamic fundamentalism is a bit different from immigrants refusing to speak the native tongue and honor national history. It refuses to stay in its ghetto and accept the rest of the Left-wing coalition. It encourages migrants to attack gays, “oppress” women, lash out at secularism, and plot terror attacks against manifestations of degenerate culture. It doesn’t accept the moral superiority of France’s blasphemous cartoons.

Western governments have previously left Islamists alone, but Macron is taking a different stance. He wants to use the full brunt of state power to make them conform to secular liberalism. It may succeed. Without tolerance for difference, Muslims may just become deracinated “Frenchmen” just like the indigenous French. France has tried for years to make them conform, but a more aggressive campaign may do the trick.

This isn’t necessarily a good thing, though. Macron’s goal is to eradicate minority identities and force them into the liberal framework, as they have done with the French. This makes it very different from American “intersectionality” which encourages minority identitarianism while denying majority identitarianism. Everyone has to be the same, whether you’re white or brown, Christian or Muslim. In this scenario, French identity is defined by its blasphemous cartoons and gay rights, not by its people or traditional culture. It’s more Francis Fukuyama than Jean-Marie Le Pen.

While Macron claims to defend the right of free expression, his government persecutes people for the crime of free expression. Marine Le Pen has faced hate crimes charges [14] for statements similar to her comments in support of Macron’s crackdown. Popular commentator Alain Soral was recently arrested [15] for inciting “racial hatred” and previously served a jail sentence for questioning the Holocaust. Meanwhile, the state musters all of its power to defend the Left-wing Charlie Hebdo’s right to offend Muslims. The difference here is that Le Pen, Soral, identitarians, and other dissidents actually challenge the regime — Charlie Hebdo supports the regime. “Free speech for me, but not for thee” indeed.

Macron is an authoritarian liberal. His liberalism is not the weak mush of the Democratic Party that enables rioting and rampant black criminality. Macron will target the enemies of the Republic, whether they’re Muslim immigrants or French nationalists. The American Left only wants to target white people and is fine with disorder. Macron has zero tolerance for disorder.

But his values are no different from American Democrats. He wants his citizenry to accept a multicultural, multiracial France. Liberal values make France France, not its people or traditions. Anyone can be French, so long as they respect Cuties and blasphemy. This is the same pablum American liberals and cuckservatives promote and it’s what all true right-wingers oppose.

It cannot ultimately win. People are more than economic machines. No one will die to defend a cartoon, but people will die (and kill) for their faith.