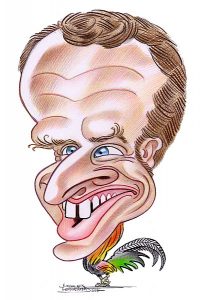 Nicolas Gauthier: With his speech at Les Mureaux, and his promise to begin fighting “Islamic separatism,” Emmanuel Macron seems to have discovered previously unglimpsed realities. Is this to his credit? Can we say that he is now regaining control?

Alain de Benoist: Macron has many faults, but he’s not a complete idiot. He has certainly realized many things since the beginning of his term, and above all, he has measured public expectations on certain subjects. That said, I don’t believe for a minute that his statements from Les Mureaux will allow him to regain control. First, there is a conceptual problem. The word “separatism” is generally synonymous with “independence.” However, Islamists do not want to separate territorially from France. They want to establish a counter-society in France in accordance with their beliefs and mores and extend it as much as possible, which is not the same thing. Let’s not forget that in France the state is secular, not society. Islamism targets civil society in order to establish cultural hegemony. Their task is made easier by the liberal state, which makes secularism a principle of depoliticization, which means that public authorities find themselves powerless in the face of metapolitical influence. It was long believed that integration was entirely a political, economic, and social matter. We have forgotten the civilizational paradigm.

Macron does not have the same attitude towards all forms of separatism. He condemns Corsican separatism or Catalan separatism, but he is willing to submit the demands of Kanak separatists [in New Caledonia] to a referendum. He even encourages separatism in Hong Kong or Nagorno-Karabakh. In France, by speaking of “separatism,” he is in fact referring to “communitarianism” — “militant community affiliations,” as Luc Ferry said when he was Minister of National Education — a term that is no less ambiguous. But since he also wants to “build an Enlightenment Islam in our country” (hope springs eternal), he is careful not to attack Islamism itself. Macron says that his project “aims to connect the insecurity linked to terrorism to everyday insecurity.” But what is this “everyday insecurity” linked to? The head of state did not even utter the word “immigration,” which shows that he has no intention of tackling the root causes of what he denounces. If he did, he knows quite well that he would immediately run into the veto of the constitutional judges and those of the European Court of Human Rights.

Political scientist Frédéric Saint Clair quite correctly says that “the role of the Republic is not to distinguish good Islam from bad Islam, or to facilitate the emergence of an Enlightenment Islam. That is for Muslims to do so, if they wish. The Republic must define the political and cultural framework of the nation.” It is quite doubtful that this will be achieved by promoting the teaching of Arabic in elementary schools, by indiscriminately attacking private schools (including Catholic ones), or by questioning the right of families to homeschooling. It is just as awkward to attack those who think there are laws “superior to those of the Republic”: for Christians, who place “natural law” above civil law, abortion cannot be legitimate just because it has become legal. For now, we are dealing with the effects of his declaration. There will be some more restrictive measures taken here and there. But we will go no further.

Macron also seems to realize that France is sorely absent on the international scene. In Europe, he has practically nothing but failures. Is this why he is visibly trying to “save Lebanon,” not to forget the support he gives to the opponents of Lukashenko, the President of Belarus?

Here, it is the naïveté of the head of state that seems astounding. Let us take the example of Lebanon, which today is indeed on the brink of collapse. Lebanon is a beautiful country, with which France has long maintained privileged relations. But it is also a country that, almost since its birth in 1920, has been divided between rival clans, all of which (with the notable exception of Hezbollah) are objectively ruled by traffickers or mafias. To imagine that we are going to put all this in order by cleverly encouraging the Lebanese to adopt Western-style rules of good “governance” amounts, not only to humiliating them publicly, which is never recommended in the Middle East, but also attributes to them a rational comportment that is at odds with the rules that govern the religious, social, and political relations of Lebanon’s families and clans.

France is similarly helpless in the face of Erdogan’s Turkey, which plays the bully in the Mediterranean, intervening militarily in Libya, fighting the Kurds in Syria, violating the land and maritime sovereignty of Greece and Cyprus. France is all the more helpless, since she can count neither on European diplomacy, which has always been non-existent, nor on Germany, which is hostage to its Turkish minority, nor on NATO, of which Turkey is a member. Here again, faced with Turkish Islamo-nationalism, the French state is reduced to mere agitation.

Macron in fact has no deep knowledge of the major international affairs in which he is trying to intervene to restore his image. The contrast with Putin is striking. As we know, Russia is already playing the decisive role in the Middle East. It is under Putin’s aegis that Lukashenko’s future will be determined. And it is also on Putin’s initiative that there is some chance for Azerbaijan (today supported by both Turkey and Israel) and Armenia to achieve some sort of modus vivendi. Macron’s best days are behind him.