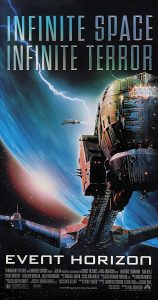 If you’re looking for a film to get you good and spooked for Halloween, you can’t go wrong with Event Horizon, the 1996 sci-fi horror directed by Paul W. S. Anderson. The spooky atmosphere, the gore, the violence, the senselessness of the horror, the simultaneous claustrophobia and agoraphobia of a vast, cavernous spaceship in Neptune’s upper atmosphere all add up to provide a unique experience. But more important to us is the existential meaning of such horrors as the movie has to offer.

Event Horizon was released in 1997, as the end of the 90s was beginning. We are now far away enough from that decade to have some historical perspective on what it was, what it entailed, and what it wanted to be. You’d do well to read Travis LeBlanc’s “Life at the End of History” if you haven’t already, and re-read it if you have. The long and short of it is: the 90s were the decade where there were no big worries and all we had to do was keep going until the end of time. Material conditions were good and would keep improving, technology was advanced and would keep advancing, the world was logical and predictable. The basic maxim of the decade was that the great historical dialectic had ended and it would be smooth sailing from now on.

Event Horizon is a film very much of its period. The introductory scenes where we meet the crew of the Lewis and Clarke rescue vessel are all 90s. Laurence Fishburne portrays Captain Miller, providing the black authority figure politically correct America has craved since the early 80s. His second in command is Lieutenant Starck, a white woman, because the film is set in 2047 and the future is female. The white woman has some sexual tension and banter with the very black rescue technician Cooper, but nothing more serious than that. Sam Neill portrays Dr. William Weir, who will later become the film’s villain. Rounding out the crew are the young and very white ensign Justin, the English trauma specialist D. J., and the white and female medical technician Peters. Their hairstyles, their clothes, their interpersonal dynamics, and the interior decoration of their vessel, the rescue ship Lewis and Clark (a problematic name in our day and age) all scream 90s. No sleek iPod-like surfaces here, only the rugged computers emblematic of that decade.

We see a world where the 90s never ended, or at least extended into the 2040s. We see a rationalistic, materialist world with concrete, practical issues, and problems to be solved such as colonizing Mars, asteroid mining, and developing faster-than-light travel. We see cool and calculating Captain Miller make reasonable decision after reasonable decision in an almost automatic manner. We follow the crew of the Lewis and Clark through their ionic drive procedures and listen to Dr. Weir’s lecture about the faster-than-light travel drive of the Event Horizon. We see the very 90s fascination with theoretical physics which arose in the wake of A Brief History of Time and majestic imagery of Neptune and its moons Triton and Nereid. 1989 was still not so far away, and the glorious pictures taken by Voyager were still able to excite the imagination. Compare and contrast to the gloomy and dull Neptune from Ad Astra. There has been a marked shift in how our civilization perceives outer space in the 22 years between Event Horizon and Ad Astra. Space was the final frontier in the 90s, where we would expand. An oft-repeated liberal canard was the need to overcome our divisions and “explore space.” Bill Hicks, a saint of nihilistic, Gen-X Leftoidism, was particularly capable of loading that expression with a sense of smug superiority. Nobody thinks about space travel these days except Elon Musk and delusional nostalgists.

The Lewis and Clark rescue vessel is dispatched to determine what has happened to the experimental Event Horizon space ship which is testing out a drive for opening wormholes as a means of faster-than-light travel. The ship disappeared 7 years before the start of the film and has now reappeared in degrading orbit around Neptune, skimming the ice giant’s upper clouds. Dr. Weir is taken on the journey, as he is the designer and architect of the Event Horizon and her experimental drive. They dock to the Event Horizon, which appears to be part cavern, part Gothic Cathedral, part medieval dungeon IN SPACE! The very architecture of the ship incites to fear and evil. What’s interesting is that the ship may be alive.

Sounds like a pretty straightforward haunted house story, but IN SPACE! Right? Possibly. But the setting is not a horror movie setting. It’s a remarkably hard sci-fi setting. Like I said earlier, the universe of Event Horizon is a universe where the 90s never ended, where all the big questions were answered, when all that’s left for humanity is to expand, fungus-like, across the infinite universe. It’s a universe of practical problems demanding rational solutions. And all of a sudden, out of left field, a crew of remarkably competent and rational rescue specialists find themselves stranded on a spaceship which has been to literal Hell and back, and brought some of Hell back with it. Material reality is pierced and materialist realists are confronted with the age-old problem of evil.

Now, contrary to what the New Atheists would have you believe, the problem of evil isn’t just something you use to BTFO Christians in online discourse, but a serious question of ethics, theology, philosophy, and other big-brained disciplines. Now, Christianity here has a series of theodicies, which are answers to the problem of evil, and so do all religions. But the nihilistic materialism characteristic of the 90s is one of the very few worldviews without an answer, no theodicy, not even a puny little anthropodicy or sociodicy. Even the crazy liberal SJW so mocked by the skeptic community, the contemporary intellectual descendants of 90s nihilism, have an answer for the problem of evil: white men did it. But whence comes evil in a materialist universe? Does it even exist?

Evil, genuine evil rudely inserting itself into a neat and orderly materialistic universe is like the literal boogieman manifesting himself in the middle of an Indian summer day and disrupting the barbecue. This guy wasn’t supposed to exist. Why is he now overturning the tables and pouring the beers out into the creek? Oh, God, he’s going for the cake! Not the cake!

Yes, the cake. And not just the cake. Your children too. And while we’re at it, why not inflict rape, mutilation, murder, and obscure Latin phrasing upon you as well? One of the harshly criticized aspects of Event Horizon is the excessive gore, but it serves to drive home the totality and senselessness of evil. Genuine evil will not stop at pouring the beer out in the creek, or murdering one man, or raping one woman, or bombing one children’s hospital. It exists to inflict torment, anguish, fear, and pain for their own sake.

The happy-go-lucky 90s were rudely derailed by two events that reinserted History and the problem of evil into the American zeitgeist.

The first was internal: the Columbine High School shooting, where REB and voDKa went on to play Doom in meatspace, apparently for the lulz. The materialist worldview tried to explain this event away. They tried to medicate it away. Spree shooters are now more — not less — common, as medication is more — instead of less — common, and besides, Harris and Klebold were themselves medicated. “No, no, the boys were bullied.” This has been proven false over the years. In fact, Harris was himself a bully. The sheriff investigating the matter resigned himself to impotently asking “why.” I have a neat answer for ya: evil. But we can’t shoehorn that explanation into a materialist worldview. And so Columbine shocked America.

The second event was a certain happening in Lower Manhattan that may or may not have inspired an Israeli dance party. Yes, I’m talking about September 11th, 2001, when radical Islam (with or without Israeli support) slapped liberal modernity in the face and erected itself as an opposing idea that was yet to be defeated in the great dialectic of history. The one-two punch of Columbine and 9/11 shook America out of its complacency, though sadly, the result was first full-gas-in-neutral messianic Neoconservatism that wore out its welcome pretty fast and was replaced with self-destructive antiracism and woke-ism in the second Obama term.

Event Horizon foreshadowed the impotence of materialist society to deal with pure evil. Every decision made by characters in the film leads to more suffering, more pain, and more death. This is because the living ship has entered their heads and is warping their perception of reality, with the ultimate goal of inflicting unspeakable suffering upon them. . . for the lulz, I guess. The film’s end hints that all of the efforts of the courageous black captain may have been in vain and that the evil is with the survivors.

Event Horizon was panned by critics and flopped commercially because it told a story that nobody wanted to hear. That the story was well-told and its aesthetics were very much of its time did not matter. Nobody at the beginning of the end of the 90s wanted to hear about evil. They doubted it even existed. This was a culture that took the Oklahoma City bombing in stride. But whether they liked it or not, Event Horizon foreshadowed the deep, dark evil that would burst out into the world in the sunset of the decade. The Trenchcoat Mafia and Al Qaeda barged into the barbecue, overturned the tables, poured the beer into the creek, ate the cake, and then proceeded to remind everyone present that evil exists in ways better not described here. Event Horizon, a masterfully-made box office bomb with a 28% rating on Rotten Tomatoes, was the prophetic and unheeded voice in the wilderness.

« White Nationalism: What Was the Question Again?