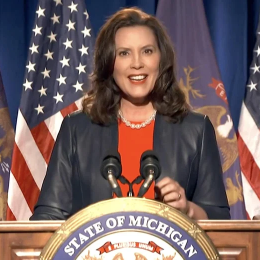 America was put on edge last week when the FBI announced it had foiled the terror plot of the century. Michigan militiamen planned to kidnap their state governor in a bid to start a new civil war. They would’ve gotten away with it too, if it wasn’t for the heroic confidential informant who alerted the FBI to their dastardly scheme.

The story shocked the nation — or at least the nation’s press. We were told this plan to kidnap Democratic Governor Gretchen Whitmer and put her on trial in Wisconsin was “frighteningly sophisticated” and was nearly executed. If successful, it would’ve somehow led to the toppling of Michigan’s government and lead to a new libertarian regime. No one asks how a few idiots could’ve managed to kidnap a governor and transport her across state lines. No one asks what this would’ve accomplished or how it would somehow lead to civil war or a libertarian utopia.

The main conclusion: Right-wing extremism is the biggest threat to America, and Donald Trump is responsible for it.

Whitmer, a Caitlyn Jenner lookalike, made this point in her reaction to the foiled plot.

“Each time he has tweeted about me, each time that he has said ‘liberate Michigan’ and said I should negotiate with the very people who are arrested because they’re ‘good people’, that incites more domestic terror,” she said. “And I am not the only governor going through this. Certainly it’s been worse for me than most, but it is not unique to me, it is not even unique to Democrats. This White House has a duty to call it out and they won’t do it — in fact, they encourage it.”

Lovecraft horror and Chicago Mayor Lori Lightfoot argued the same point. “I think all roads lead back to Donald Trump,” she said. “Unfortunately, every single time he attacks a public official, and I know this personally, there are those who take that as license to come after us.”

It’s all very convenient that a dubious terror plot planned by dimwits and foiled by one intrepid “confidential informant” reaffirms all of the narratives supported by liberal elites. The far-Right is a bigger danger than the far-Left, Trump is stirring up violence, strong Democrats have to fear for their lives, and we need to trust our brave feds more than ever (unless they work for ICE or Border Patrol). It’s almost like this was an entrapment scheme that helps out the powers that be. . .

Entrapment is a very common practice for our federal agents. Generally, entrapment involves the government finding a few otherwise harmless idiots and informants or agents cajoling them into some hare-brained scheme. Like. . . kidnapping the governor of a state. The men charged in the plot don’t exactly look like evil masterminds — they just look like fools who got duped into a stupid plot. At least one of them was vocally anti-Trump and another one received a pardon from Delaware’s Democratic governor in 2019.

The media, of course, will dismiss entrapment talk as a “conspiracy theory” that undermines our valiant paper shufflers at the FBI headquarters. But in fact, most foiled terror plots would count as entrapment schemes. A 2015 Northwestern University study found that 50% of terror-related cases demonstrated at least three core entrapment indicators, including:

There are at least three indicators present in the Michigan case. None of the men were known extremists or affiliated with extremist groups, despite the media calling them white supremacist militiamen. It appears the government had control of the crime, as law enforcement was well aware of the plot and moved Whitmer around several times in response to it. Defense attorneys for the plotters claim the biggest proponent of the terror plot was the informant himself.

The government likes to highlight the cases involving entrapment to the public. There were three or more entrapment indicators in 100% of thwarted jihadi attacks that received substantial media coverage.

The feds know how to pitch themselves when they need their budgets secured. Islamic terrorists have faded from the public eye, and now white supremacists stand as the great bogeyman that justifies the Deep State. It should be expected a few patsies will be used to frighten the public — especially when there’s an election coming up.

The media hysteria’s primary aim is to indict Trump along with the plotters who’ve made it clear they hate the president. Trump, of course, is running as the law and order candidate who vows to counter Antifa marauders in the streets. To undermine this claim, journalists and Democrats insist the real threat is white supremacists. They inevitably resort to histrionics over Charlottesville and a legion of hate hoaxes to convince them of this threat.

They also rely on the feds to fortify this claim. Both the FBI and Homeland Security have claimed in recent weeks that Right-wing extremists pose the greatest danger to this country. FBI director Christopher Wray told Congress white supremacists are the most lethal domestic terrorists, before admitting that most of the violence in 2020 was caused by “anti-government extremists” — an extremely broad category that includes Leftists, militias, and sovereign citizens. It’s a duplicitous classification that hides left-wing violence behind a moniker the public associates with the Right.

DHS’s pronouncements have been even worse. Acting DHS secretary Chad Wolf, a Trump ally and appointee, told Congress that white nationalists are the gravest domestic danger. This statement comes from someone who was the administration’s leader against Antifa anarchy in Portland and is well aware of who is firebombing courthouses. His agency sent out a threat assessment last week that formally labeled “white supremacists” the number one threat, further undermining his credibility. DHS is also partnering with Left-wing groups to “counter the spread” of white nationalism and Right-wing extremism.

This is all happening under a Trump administration. Just imagine what they will do under Biden.

Trump is not directing them to do this — he’s probably not even aware of what his own personnel is doing. Trump is Trump and he only knows what’s put before him. He and his administration have many faults, one of which is not staffing the executive branch with loyalists. He also has done little to purge the deep state which aims to overthrow him and dispossess his voters. This failure will have serious costs in the years to come.

The Michigan kidnapping plot foreshadows what we will see throughout the 2020s. The feds will entrap many idiots into even more elaborate schemes. Expect journalists to seriously report on the frighteningly sophisticated plans to teleport Kamala Harris to Mars and reenact the plot of White House Down. It lets the feds prove they’re doing something, justifies their preferred targets, and sustains their inflated budgets. This fed-driven panic will also aim to suppress the historic American people who challenged their authority and put Trump in the White House. Foiled terror plots will lead to more censorship and more persecution of groups and figures with absolutely no ties to violence. It will further entrench the globalist surveillance state and erode the First and Second Amendments.

All thanks to some gullible idiots who “want to do something” and will agree to insane ideas.

The feds would love to entrap you in a poorly-thought-out terror plot. Just look at the morons who joined The Base. You should remember to disassociate from anyone who wants you to engage in criminal violence — they’re either a maniac or a fed.

And what they’re planning won’t help the cause. It will only help our enemies.

Trump, for Lack of Something Better »